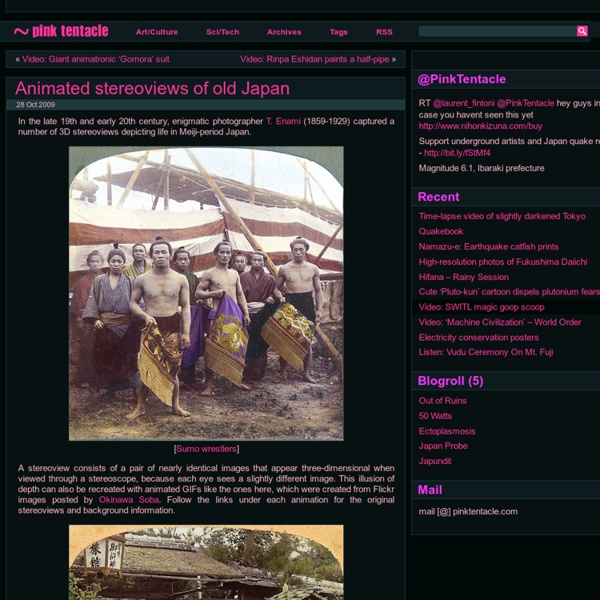 28 Oct 2009 In the late 19th and early 20th century, enigmatic photographer T. Enami (1859-1929) captured a number of 3D stereoviews depicting life in Meiji-period Japan. [Sumo wrestlers] A stereoview consists of a pair of nearly identical images that appear three-dimensional when viewed through a stereoscope, because each eye sees a slightly different image. This illusion of depth can also be recreated with animated GIFs like the ones here, which were created from Flickr images posted by Okinawa Soba. [Meeting at gate] [Buddhist ornament dealer] [Geisha washing their hands in the garden] [Chujenji Road, Nikko] [Geisha playing music] [Firewood dealers] [Great Buddha of Kamakura] [Torii gates at Inari shrine, Kyoto] [Geisha girls with flowers and cat] [Traveler in the mountain fog near Chujenji] [Clam diggers having lunch] [Tokyo Industrial Exposition, Ueno Park, 1907] [Campfire on the peak of Mt. [Geisha in a tearoom] [Kitano temple, Kyoto] [Road along the Fuji river] [Geisha drinking beer in the park]

photography by Angus R Shamal A selection of some of the most awesome Behind-the-scenes shots I’ve seen from some famous movies. Back when set designs were huge and hand made, when special effects where mechanical and photographic and film stars were risking their lives on the set. source: Ain’t It Cool News. A self portrait of Stanley Kubrick with his daughter, Jack Nicholson and the crew @ the set of The Shining. on the set of Fritz Lang’s Metropolis — the actress inside the Maria robot taking a breather. The Empire Strikes Back – filming the Crawl.

SCHOPENHAUERS 38 STRATAGEMS, OR 38 WAYS TO WIN AN ARGUMENT Arthur Schopenhauer (1788-1860), was a brilliant German philosopher. These 38 Stratagems are excerpts from "The Art of Controversy", first translated into English and published in 1896. Carry your opponent's proposition beyond its natural limits; exaggerate it. The more general your opponent's statement becomes, the more objections you can find against it. The more restricted and narrow his or her propositions remain, the easier they are to defend by him or her. Use different meanings of your opponent's words to refute his or her argument.

Van Gogh's Paintings Get Tilt-Shifted (12 pics) After seeing how tilt-shift photography could make real world scenes appear like miniature models, Serena Malyon, a third-year art student, decided to simulate the effect on Van Gogh's famous paintings. Using Photoshop, she manipulated the light and adjusted the focus to make us see these paintings in ways we could have never imagined. Amazingly, nothing in these paintings was changed, added or removed. The incredible illusions are all created by the magic of Photoshop. Update: Recently, I was able to get in touch with Serena to ask her how she came up with this idea.

Thoughtful Photography HDB Rainbow Sunset (Gif), 2014. All Rights Reserved. 4MB Click here for HDB Rainbow Sunset Extra High Res This is a follow up to my previous series Time is a Dimension (TIAD). anonymous1.html from thecastsite.com You were on your way home when you died. It was a car accident. Nothing particularly remarkable, but fatal nonetheless. You left behind a wife and two children. Cinemagraphs About Cinemagraphs are partially animated photographs in which a subtle movement action occurs. The effect is produced by taking a series of continuous shot photographs or a video recording and compositing the frames into an animated GIF file. Origin the impossible cool. “Art is all about doing what you shouldn’t.” Nobuyoshi Araki. “There are no natural barriers.

Wigglegrams About Wigglegrams (also known as stereographs) are animated images that simulate 3D effect by looping two or three frames of an object shot from the vantage points of the viewer’s right and left eyes. Similar to cinemagraphs, each instance usually consists of a few continuous frames that play in loop. Origin In 2002, Californian interaction designer Jim Gasperini uploaded eight experimental GIFs that combined right and left images from stereographs he had previously taken, describing them as “wiggling scenes.” Titled “Time for Space Wiggle,” the page was shared on Metafilter on July 31st, 2003 and BoingBoing on November 1st.

A-List Actors in Their Element - Sam Jones (16 pics) Take a close look at the photos by Sam Jones and you'll notice a common theme. Each of these major movie stars are posing as if they're part of a scene. Whether it's Steve Carell trying to stand inconspicuously in his patterned suit or it's Steve Martin walking nonchalantly through a mine of banana peels, these actors agreed to create a story for a single snapshot. What Sam Jones does so well is captures these actors in a raw and real way. He brings out their God given personalities and makes them shine.

NYC Artist Sam Cannon Pushes the Boundaries in GIF Art With her Experimental and Often Creepy Moving Images While pretty much anything can be called art, there are certain mediums and styles that obviously get more attention than others. The GIF file, a format that allows several photos to be synced together to create a tryingly seamless moving image started off in the same vein as the Meme: a fun addition to online communication, traditionally (or at least how we used to use them) featured in emails to add a bit of jest or fun into the mix. Now, the GIF can be regarded as a growing form of art, especially when you have someone creative like NYC-based photographer and director Sam Cannon behind the wheel, steering the format into depths of the bizarre that definitely evokes feelings.

Buddhabrot fractal method by Melinda Green The images on this page were all generated using a technique I developed to render the Mandelbrot set. It's important to realize that it is not a different fractal from the Mandelbrot set, but simply a different way of displaying it. Clicking on some of the images will take you to a normal rendering of the exact same area, but using the traditional Mandelbrot technique. Note that even though the images resemble Hindu art, they were actually generated completely automatically, without any sort of human artistic intervention. Portraits of Strangers When I’m out on the streets, I often encounter faces that make me look twice; faces that stand out in the crowd without trying; faces that are out of the ordinary. They range from the exquisitely beautiful to the strangely wonderful. I started to approach these strangers for permission to take a photo of them. Some said no, but most said yes. After taking their portrait, I’d say ‘thank you’ and walk on along. I didn’t ask for their names, or where they came from, or what they do, because I wanted the viewers to see them how I saw them: as beautiful strangers.