Free Paper Toys From The Toymaker! 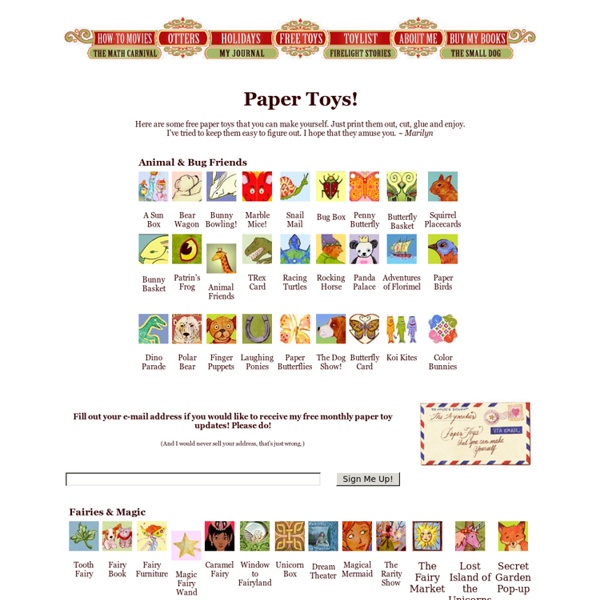 A Victorian Christmas - Christmas Music Makers Not all carol-singers were welcome ! On the first night of the Christmas holidays the voices of carol singers floated in on the night air, and if they were lucky, welcomed indoors for a glass of punch and a mince pie. “There is another aspect of the streets of London at Christmas, which requires notice, the more especially as this year it is painfully prominent - the carol singers ! Who seem to look upon themselves as privileged for the sake of the old familiar chant which they musically or unmusically pour into our ears, and who, of all ages and of both sexes, swarm in every street in numbers of which an accurate estimate would convey a somewhat alarming idea of the poverty of London - troops of unmusical beggars have made their appearance in the streets this year in numbers surpassing all precedent of experience.”Illustrated London News December 1848 TopHildesheimer & Faulkner No 967102 x 140mm (4 x 5½in)

Victorian Parlour Games Contrary to popular belief, Victorians loved games, indoors and outside. Here are some Victorian Parlor Games, as well as some modern parlor games, that can be played indoors or out. Look-a-bout The host shows everyone a little knick knack in the room. You're Never Fully Dressed without a Smile One person is selected to be "it." Blind Man's Bluff One person is blindfolded, and all other guests scatter around the room. Change Seats! This is a variation on a Victorian game, but a warning to those attempting this one, clear the room of precious little decorations, it can get a little wild! Charades This is a classic Victorian game with which most people are quite familiar. Pass the Slipper We used to play this at church when I was little. Forfeits We played a version of this when I was little as well. The Name Game Provide each guest with 10 small pieces of paper, and a pen or pencil. Example: Name - Abraham Lincoln Clues: He lived in a log cabin. I'm Thinking of Something... Alphabet Minute Similes

History-Of-Antebellum-Christmas Home Learn And Do Indiana History America 1800 1860 Aspects of the Antebellum Christmas Author: Tim Crumrin, Conner Prairie Historian By 1860 many of the elements of our modern "traditional" Christmas were easily discernible. Perhaps the most important of the changing elements was the country's attitude toward Christmas. The continuing popularity of Dickens' A Christmas Carol and its "carol" philosophy added yet another element by synthesizing "certain religious and secular attitudes... into a humanitarian pattern." It was within such an atmosphere that Christmas as we know it began to manifest itself. The Christmas Tree The Godey's Magazine publication, in 1850, of an article and illustrations depicting the British royal family's celebrating around the christmas tree is generally seen as a seminal event in the ultimate American adoption of this German (Prince Albert, of course, was German) custom. With this background it is not surprising that the tree had become established by 1860. Music

David Perdue's Charles Dickens Page - Dickens and Christmas Dickens pared down A Christmas Carol for his public readings. Read an annotated version of Dickens' own reading text that can be read in a single sitting! The Cratchit family drew round the hearth, in what Bob Cratchit called a circle, meaning half a one; and at Bob Cratchit's elbow stood the family display of glass. Two tumblers, and a custard-cup without a handle. These held the hot stuff from the jug, however, as well as golden goblets would have done; and Bob served it out with beaming looks, while the chestnuts on the fire sputtered and cracked noisily. From Stave 3 of Read Dickens' first Christmas sketch describing a family Christmas at the home of Uncle and Aunt George where many of the themes of A Christmas Carol are foreshadowed. Read Dickens' short sketch describing a New Year's Eve party. At the end of A Christmas Carol, Scrooge proposes that he and Bob Cratchit will discuss all that Scrooge will do for Bob's family later that afternoon "over a bowl of Smoking Bishop." Dr. Oh!