The history of dramatic comedy 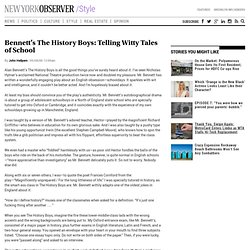 I’ve seen Nicholas Hytner’s acclaimed National Theatre production twice now and doubled my pleasure. Mr. Bennett has written a wonderfully engaging play about an English obsession—schooldays. It sparkles with wit and intelligence, and it couldn’t be better acted. And I’m hopelessly biased about it. Stinson01613. The History Boys - Alan Bennett. The complete review - drama The History Boys. 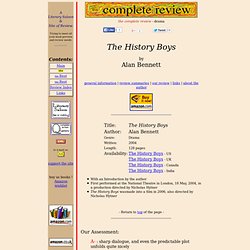 HistoryBoys_StudyGuide2.pdf. Alan Bennett's new play is not just about history - it makes history. School shapes our ends - almost literally so in the case of the more sexually promiscuous male public schools. 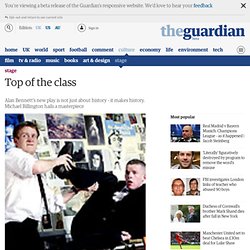 How and where you were educated has a big influence on your whole life. I might not have ended up a critic (a prospect some will entertain with relish) had it not been for a trio of English teachers who fostered a love of theatre and analysis. I can also date my political awakening from the moment a peculiarly detested fellow pupil burst into my public school classroom the day after the 1951 general election shouting: "We're in" - meaning, of course, the Tories. 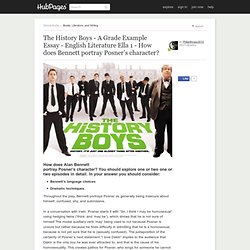 Throughout the play, Bennett portrays Posner as generally being insecure about himself, confused, shy, and submissive.In a conversation with Irwin, Posner starts it with “Sir, I think I may be homosexual” using hedging twice ('think’ and ‘may be’), which shows that he is not sure of himself.The modal auxiliary verb ‘may’ being used to not because Posner is unsure but rather because he finds difficulty in admitting that he is a homosexual, because is not yet sure that he is (sexually confused). The History Boys - A Grade Example Essay - English Literature Ella 1 - How does Bennett portray the Headmaster? 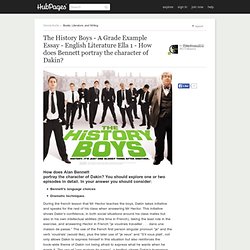 During the french lesson that Mr Hector teaches the boys, Dakin takes initiative and speaks for the rest of his class when answering Mr Hector. This initiative shows Dakin’s confidence, in both social situations around his class mates but also in his own intellectual abilities (this time in French), taking the lead role in the exercise, and answering Hector in French “je voudrais travailler . . . dans une maison de passe.” The use of the french first person singular pronoun “je” and the verb ’voudrais’ (would like), plus the later use of “je veux” and “S’il vous plait’, not only allows Dakin to express himself in this situation but also reinforces the book-wide theme of Dakin not being afraid to express what he wants when he wants it.

Thatcher's Britain. Every decade sires its own tumult, positing leaders as both heroes and villains. 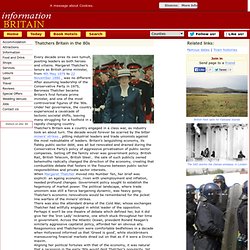 Margaret Thatcher’s tenure as British prime minister, from 4th May 1979 to 22 November 1990 , was no different. After assuming leadership of the Conservative Party in 1975, Baroness Thatcher became Britain’s first female prime minister, and one of the most controversial figures of the ‘80s. Under her governance, the country experienced a cavalcade of tectonic societal shifts, leaving many struggling for a foothold in a rapidly changing country. Thatcher’s Britain was a country engaged in a class war, as industry took an about turn.

The History Girls. Critical Essay by the Guardian. Alan Bennett, commentators like to say, is heir to Betjeman as the nation's teddy bear. 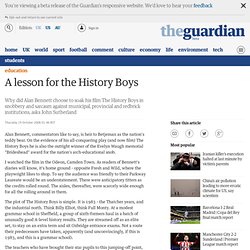 ‘History Boys’ explores educational methods, sexual identity — The Bowdoin Orient. The Politics of Education. Time Review. At a somewhat less than grand public school in the north of England in the 1980s, a group of bright young students have been singled out for special tutoring with an eye to getting them into either Oxford or Cambridge, which would greatly enhance school's prestige. 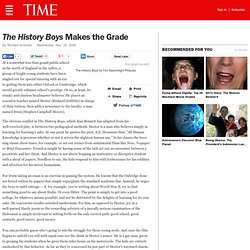 Or so, at least, its cranky and clueless headmaster believes. He places an eccentric teacher named Hector (Richard Griffiths) in charge of their tuition, then adds a newcomer to the faculty, a man named Irwin (Stephen Campbell Moore). The obvious conflict in The History Boys, which Alan Bennett has adapted from his well-received play, is between two pedagogical methods. Hector is a man who believes simply in learning for learning's sake. At one point he quotes the poet, A.E, Housman thus: "All Human Knowledge is precious whether or not it serves the slightest human use. " For Irwin taking an exam is an exercise in gaming the system.

You can probably guess who's going to win the struggle for these young souls. Alan Bennett Criticism and Biography. A rare and regular literary candidate for canonisation in the mainstream press, Bennett’s status as an English national institution himself can perhaps be gauged from the near universal approval voiced in October 2008 to the news that he was donating his entire collection of manuscripts, notes, drafts and scripts from a 50-year literary career to the Bodleian Library at his alma mater, the University of Oxford. 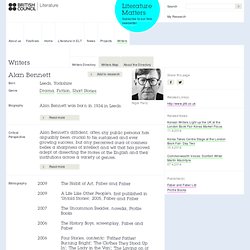 In an interview to mark the donation, Bennett said that he saw it as the repayment of a debt accrued during years of free education as a boy at grammar school and then at the university itself: 'Giving the manuscripts to Bodley - it sounds rather pious - is a kind of small recompense for what I was given. And not merely by Oxford, I also feel I was given it by the state, and the state isn't something that people would normally thank or think well of - and hence the phrase "the nanny state"' (The Guardian, 24 October 2008). Guy Woodward, 2009. Cultural Interpretation. Author: Fiona Stewart Keywords: History, education, truth, names, meaning, significance, maturity, friendship. 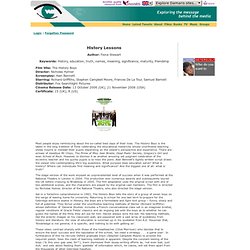 What does the History Boys show us about Britain's education system? Yesterday afternoon I went to see a wonderful performance of Alan’s Bennett’s The History Boys (now been made into a film). The play, while very comical, also asks some probing questions of the British education system. These same questions and issues are just as prevalent in every school up and down the country today, as they were in ‘80s Sheffield, where the play is set.

Most of my friends have a gripe or two about their school, their teachers, etc, etc. We all have someone to blame for not getting an ‘A’ in an exam or piece of coursework. Is the current approach of focusing on exams really the best way to teach and grade our society? The play is centres around a group of schools boys, who have achieved grades good enough for them to apply to Oxbridge to study history. Is Alan Bennett right to prefer US literature?