y1 brief 11 tv title. 20 amazing movie title sequences to inspire you. Forget movie wallpapers and posters, it's movie title sequences that can often be the most important part of a film. Working in a similar way to a landing page for a website, movie titles set the tone, atmosphere and characters for the audience, all of which can make or break an opening scene.

The likes of Saul Bass and Kyle Cooper have set the highest of movie title standards and as you'll see from this list, many graphic designers have clearly been influenced by them, while creating a new breed of iconic and culturally relevant movie title sequences of their own. Here – in no particular order – we pick some of the best movie title sequences ever created and professional designers tell us why they work. 01. Vertigo Studio: Paramount Pictures Sequence Designer: Saul Bass Year of release: 1958 "Alfred Hitchcock may have been the master of suspense, but Saul Bass was undoubtedly the master of suspenseful title sequences," says freelance graphic designer and illustrator Joe Stone. 03. 04. 05. CARNIVALE Opening Credits. Bicentennial Man (1999) In the not too distant future (2005 to be exact), inside the factory of NorthAM Robotics, a man is manufactured — a positronic man. 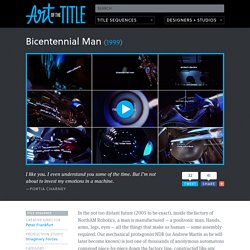 Hands, arms, legs, eyes — all the things that make us human — some assembly required. Our mechanical protagonist NDR (or Andrew Martin as he will later become known) is just one of thousands of anonymous automatons conveyed piece-by-piece down the factory line, constructed like any other industrial good, bound for lonely lives of servitude. Or maybe something more. In a decade dominated by grim, future-wary science fiction, Imaginary Forces’ title sequence for Bicentennial Man presents a friendly, domesticated vision of what the new millennium had to offer.

The sequence essentially operates as a cheeky counterpart to the iconic Terminator 2: Judgment Day teaser trailer. Part of what makes the opening of Bicentennial Man especially endearing is the fact that almost everything on screen is a genuine physical object. So, let’s talk about Bicentennial Man. Talking title sequences with the master… KYLE COOPER » Thunder Chunky. Kyle Cooper specializes in title sequences. 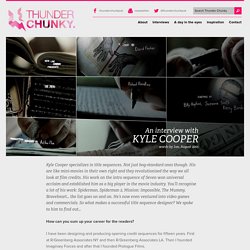 Not just bog-standard ones though. His are like mini-movies in their own right and they revolutionised the way we all look at film credits. His work on the intro sequence of Seven won universal acclaim and established him as a big player in the movie industry. You’ll recognise a lot of his work: Spiderman, Spiderman 2, Mission: Impossible, The Mummy, Braveheart… the list goes on and on. He’s now even ventured into video games and commercials. How can you sum up your career for the readers? I have been designing and producing opening credit sequences for fifteen years. I direct commercials and design. You will always be remembered for the titles for Se7en. I still like them. A History Of The Title Sequence title sequence - Watch the Titles. What do I have to do to become a title designer? 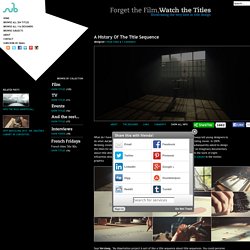 It's a question we're often asked. 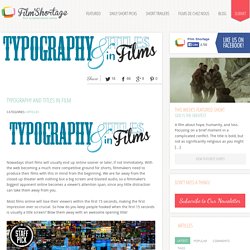 With the web becoming a much more competitive ground for shorts, filmmakers need to produce their films with this in mind from the beginning. We are far away from the closed up theater with nothing but a big screen and blasted audio, so a filmmaker’s biggest opponent online becomes a viewer’s attention span, since any little distraction can take them away from you. Most films online will lose their viewers within the first 15 seconds, making the first impression ever so crucial. So how do you keep people hooked when the first 15 seconds is usually a title screen? Blow them away with an awesome opening title! A great visual example of film titles is Ian Albinson‘s “A Brief History of Title Design” for ArtOfTheTitle.com. A Little History of The Title / Typography The history of typography is one that dates back almost 3800 years.

Film titles can be great fun. -Julia May for Smashing Magazine Simplicity Effects. The Art Of Film Title Design Throughout Cinema History. Advertisement Have you ever thought of what makes you remember a certain movie or TV show? 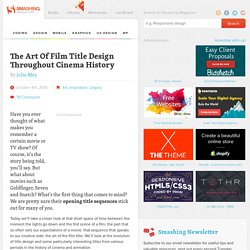