US of A vs. the terrible IRAN 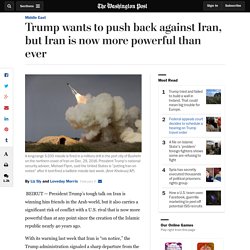 With its warning last week that Iran is “on notice,” the Trump administration signaled a sharp departure from the policies of President Barack Obama, whose focus on pursuing a nuclear deal with Iran eclipsed historic U.S. concerns about Iranian expansionism and heralded a rare period of detente between Washington and Tehran. Many in the region are now predicting a return to the tensions of the George W. Bush era, when U.S. and Iranian operatives fought a shadow war in Iraq, Sunni-Shiite tensions soared across the region and America’s ally Israel fought a brutal war with Iran’s ally Hezbollah in Lebanon. world middle_east Dallas shooting updates News and analysis on the deadliest day for police since 9/11. post_newsletter353 true false. U.S. Concedes $400 Million Payment to Iran Was Delayed as Prisoner ‘Leverage’ Photo. 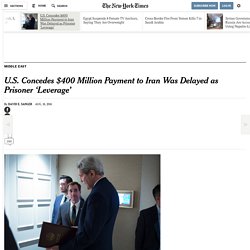 A Shifting Narrative on Iran. For more than twenty years the world has been hearing from Israeli Prime Minister Benjamin Netanyahu and his friends in the United States that Iran is a global threat because it is developing nuclear weapons. 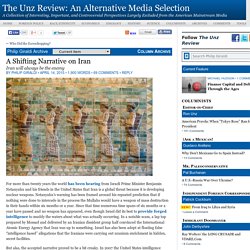 Netanyahu’s warning has been framed around his repeated prediction that if nothing were done to intercede in the process the Mullahs would have a weapon of mass destruction in their hands within six months or a year. Since that time numerous time spans of six months or a year have passed and no weapon has appeared, even though Israel did its best to provide forged intelligence to muddy the waters about what was actually occurring. In a notable scam, a lap top prepared by Mossad and delivered by an Iranian dissident group half convinced the International Atomic Energy Agency that Iran was up to something. Israel has also been adept at floating false “intelligence based” allegations that the Iranians were carrying out uranium enrichment in hidden, secret facilities.

Another Idiotic Plan to Hurt Russia.    Six Things You Didn’t Know the U.S. and Its Allies Did to Iran  :    Information Clearing House - ICH. By Jon Schwarz April 08, 2015 "ICH" - "The Intercept" - It’s hard for some Americans to understand why the Obama administration is so determined to come to an agreement with Iran on its nuclear capability, given that huge Iranian rallies are constantly chanting “Death to America!” 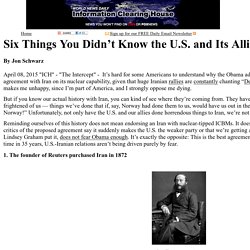 I know the chanting makes me unhappy, since I’m part of America, and I strongly oppose me dying. But if you know our actual history with Iran, you can kind of see where they’re coming from. They have understandable reasons to be angry at and frightened of us — things we’ve done that if, say, Norway had done them to us, would have us out in the streets shouting “Death to Norway!” Unfortunately, not only have the U.S. and our allies done horrendous things to Iran, we’re not even polite enough to remember it. Reminding ourselves of this history does not mean endorsing an Iran with nuclear-tipped ICBMs. Operation Merlin. Operation Merlin is an United States covert operation under the Clinton Administration to provide Iran with a flawed design for a component of a nuclear weapon ostensibly in order to delay the alleged Iranian nuclear weapons program, or to frame Iran.[1] History[edit] In his book State of War, author and intelligence correspondent for The New York Times, James Risen describes that the CIA chose a defected Russian nuclear scientist to provide deliberately flawed nuclear warhead blueprints to Iranian officials in February 2000.[2] According to CIA documents, the search for a suitable Russian emigre with an engineering background in nuclear physics and production started in September 1996. 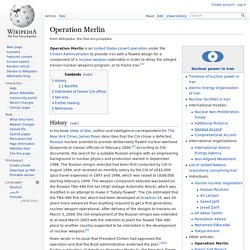 The Russian emigre selected had been first contacted by CIA in August 1994, and received an monthly salary by the CIA of US$5,000 (plus travel expenses) in 1997 and 1998, which was raised to US$6,000 starting February 1999. Stuxnet's Secret Twin - By Ralph Langner. CIA Confirms Role in 1953 Iran Coup. Have the British Been Meddling with the FRUS Retrospective Volume on 1953? 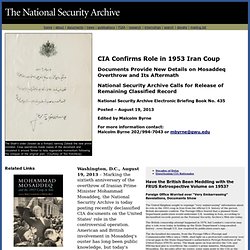 Foreign Office Worried over “Very Embarrassing” Revelations, Documents Show The United Kingdom sought to expunge "very embarrassing" information about its role in the 1953 coup in Iran from the official U.S. history of the period, British documents confirm. The Foreign Office feared that a planned State Department publication would undermine U.K. standing in Iran, according to declassified records posted on the National Security Archive's Web site today. CIA Admits It Was Behind Iran's Coup - By Malcolm Byrne. Sixty years ago this Monday, on August 19, 1953, modern Iranian history took a critical turn when a U.S.- and British-backed coup overthrew the country's prime minister, Mohammed Mossadegh. 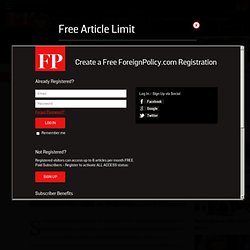 The event's reverberations have haunted its orchestrators over the years, contributing to the anti-Americanism that accompanied the Shah's ouster in early 1979, and even influencing the Iranians who seized the U.S. Embassy in Tehran later that year. But it has taken almost six decades for the U.S. intelligence community to acknowledge openly that it was behind the controversial overthrow. In classified cyberwar against Iran, trail of Stuxnet leak leads to White House. The Obama administration provided a New York Times reporter exclusive access to a range of high-level national security officials for a book that divulged highly classified information on a U.S. cyberwar on Iran’s nuclear program, internal State Department emails show. 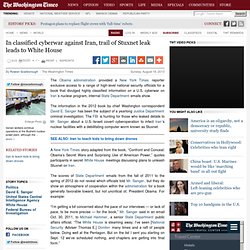 The information in the 2012 book by chief Washington correspondent David E. Sanger has been the subject of a yearlong Justice Department criminal investigation: The FBI is hunting for those who leaked details to Mr. Sanger about a U.S. Good-bye Dubai? Bombing Iran’s Nuclear Facilities would leave the Entire Gulf States Region virtually Uninhabitable. The insanity of war. 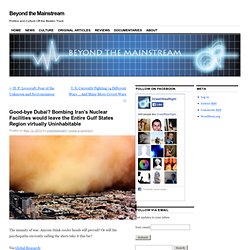 Anyone think cooler heads will prevail? Or will the psychopaths currently calling the shots take it this far? Every Spring and Summer, during a period of low pressure over the Persian Gulf, powerful winds known as the “shamals and sharqi,” sweep down from the north and north east into Saudi Arabia, whipping up ever more grains of sand as they head south and south west across the Arabian Desert. Frequently, these sandstorms become gargantuan in size – hundreds of meters high and kilometers wide and in length of dense roiling particulate, choking the lungs of those exposed, blocking out the sun completely and, by the time they are over, burying whole towns, sometimes even large cities like Riyadh, in a meter deep or more of sand.

The wind speeds range from 30 to 300 kilometers per hour, and they generally take a semi-circular route, heading back out to the southern gulf and the remaining Gulf States. Navy To Send a Strong Message To Iran With Pointless Multinational Exercise. MANAMA, BAHRAIN – In a move sure to send a strong message to Iran, the US Navy has kicked off the opening stages of Operation Hawk Thunder, an expensive, pointless exercise in the Persian Gulf with no real objective, sources confirmed today. 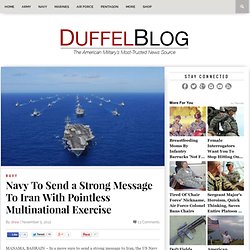 “Operation Hawk Thunder will show Iran that the US Navy maintains a strong presence in the Gulf,” Rear Admiral William DeMark said. “There is nothing the Iranians fear more than a bunch of ships doing circles in the ocean and returning to port. Ships from twelve nations will be joining us, so we won’t be the only country wasting fuel in this time of economic hardship.” Operation Hawk Thunder will consist of three parts. ‘October Surprise’ and ‘Argo’ Exclusive: Iran’s ex-President Bani-Sadr, in criticizing inaccurate history in “Argo,” says most Iranian officials wanted a quick end to the 1980 U.S. -Iranian hostage crisis, but Ronald Reagan’s presidential campaign struck a deal with Ayatollah Khomeini to delay the hostages’ release, reports Robert Parry.

By Robert Parry. ‘Argo’ helps Iran’s dictatorship, harms democracy. It was not my intention to write about the film “Argo.” I initially viewed it as another Hollywood movie that aimed to keep an audience on its toes through some combination of fact and fantasy, in order to cash in at the box office. It is, indeed, a well-made movie. However, when first lady Michelle Obama presented its director, Ben Affleck, with the Oscar for Best Picture at this year’s Academy Awards, it also communicated a more political message that the film was approved by President Obama himself.

I then felt that I needed to make my views of the movie clear, particularly as it mentions me. Argo and the Stolen Truth About Iran. This year’s Oscar-winning movie ‘Argo’ recently spurred Iran’s former president, Abolhassan Banisadr to write an article about the ‘October Surprise’. In it, he discusses the secret deal between Ronald Reagan and Ayatollah Khomeini which, by delaying the release of the hostages being held in the US embassy in Tehran, swayed the results of the 1980 US presidential election to favour Reagan over the incumbent Jimmy Carter.

Banisadr argues that through ‘falsifying, misrepresenting and taking critical facts out of context,’ the film ‘delivers a pro-CIA message,’ and that by portraying Iranians as irrational and aggressive people it prepares the US public to support a war should the current nuclear negotiations fail. The day after Banisadr’s article was published, Robert Parry, who had written previously about the ‘short-sighted history of Argo’, wrote a second article supporting these arguments. This may seem puzzling at first. This brings me to my main point. Iran Promises To End Nuclear Program In Exchange For Detailed Diagram Of Atomic Bomb. TEHRAN—In an unprecedented display of international cooperation from the Middle Eastern nation, Iran reportedly pledged to end the country’s burgeoning nuclear weapons program in exchange for detailed schematics for the construction of an atomic bomb.

“In the spirit of compromise, the nation of Iran promises that, should a Western nation supply us with blueprints for the design and assembly of a fission bomb, we will immediately put a stop to our nuclear initiative,” said Iranian President Mahmoud Ahmadinejad, calling the terms of this proposed agreement “fair, equitable, and well within reason.” “Of course, we’ll also need detonators and a launching mechanism, as well as the expert guidance of the world’s top physicists and engineers. But once we have that, our nuclear weapons program will be a thing of the past. You have my word on that.” At press time, U.S. Gov News Transcript: DOD News Briefing with George Little from the Pentagon. GEORGE LITTLE: Good afternoon. U.S. Sanctions on Iran Hit Health Care. U.S. Sanctions on Iran Hit Health Care Posted by Clif Burns at 6:06 pm on September 6, 2012.

The U.S. Navy adviser who thwarted a plan to provoke war with Iran.