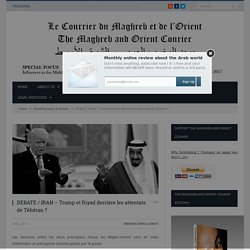 IS-claimed attacks on Iran's parliament, shrine kill 12. TEHRAN, Iran (AP) — Gunmen and suicide bombers attacked Iran’s parliament and the shrine of its revolutionary leader on Wednesday, killing at least 12 people, wounding dozens and igniting an hours-long siege at the legislature that ended with four attackers dead. 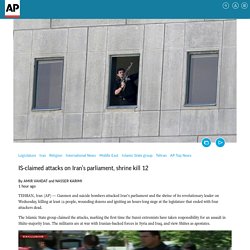 Trump sparks war of words with Iran in fiery Middle East speeches. Newly elected Iranian President Hassan Rouhani has responded to US criticism (Reuters) Donald Trump sparked a war of words with Iran on Monday, as the US president used two speeches in Saudi Arabia and Israel to accuse Tehran of funding terrorism and fuelling "the fires of sectarian conflict and terror". 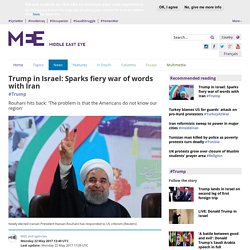 Speaking alongside Israel's president, Reuven Rivlin, at his residence in West Jerusalem on Monday, Trump said: "There is a growing realisation among your Arab neighbours that they have common cause with you in the threat posed by Iran. " "Most importantly, the United States and Israel can declare with one voice that Iran must never be allowed to possess a nuclear weapon - never, ever - and must cease its deadly funding, training and equipping of terrorists and militias, and it must cease immediately.

" "And it must cease immediately. " Iran Blasts Trump's Baseless, Interventionist Allegations. In comments on Monday, Bahram Qassemi strongly criticized the new US administration for its “deceitful stances, interfering remarks, and destructive and provocative measures”, one day after Trump accused Iran of stoking the fires of sectarian conflict and terror during a trip to Riyadh. 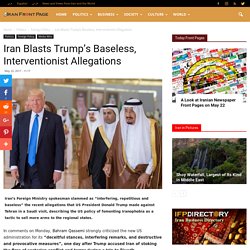 The Iranian spokesman also reminded the US officials of their pre-election assertions that the previous American administration has had a role in the creation and support of Takfiri terrorist groups like Daesh (ISIL), calling on Trump administration to end the policy of bellicosity, interference, Iranophobia, and arms sale to the real sponsors of terrorism. During his trip to Riyadh, Trump signed a nearly $110 billion defense deal with Saudi Arabia. 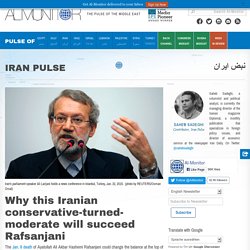 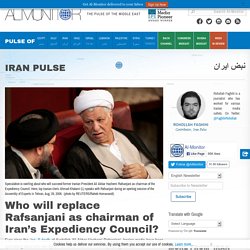 Here, top Iranian cleric Ahmad Khatami (L) speaks with Rafsanjani during an opening session of the Assembly of Experts in Tehran, Aug. 29, 2006. (photo by REUTERS/Raheb Homavandi) Author: Rohollah Faghihi Posted January 24, 2017 Ever since the Jan. 8 death of Ayatollah Ali Akbar Hashemi Rafsanjani, Iranian media have been speculating about who will replace him as the chairman of the Expediency Council. Summary⎙ Print The question of who will replace Rafsanjani as the chairman of Iran’s Expediency Council is being discussed in the Iranian media following the ayatollah's Jan. 8 death. Iran's reformists stand to lose from Rafsanjani's death. Correction - Jan. 10, 2016: Rafsanjani was the closest associate of the late leader Ayatollah Khomeini in founding the pillars of the Islamic republic. 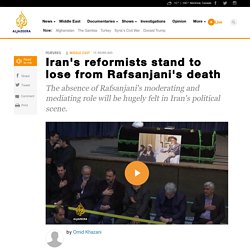 Tehran - Akbar Hashemi Rafsanjani, the former president of Iran who died on Sunday evening at the age of 82, was an exceptional figure in the history of the Islamic Republic, and his death has left Iran's moderates orphaned before the forthcoming presidential elections. "Now I can die with peace of mind," Rafsanjani had said in 2013, shortly after Iranian President Hassan Rouhani, a low-profile political figure at the time, achieved a landmark victory by defeating hardliners in presidential elections, thanks to Rafsanjani's overwhelming support. Iranian-Turkish tug-of-war over Kurds. Protesters hold flags showing jailed Kurdistan Workers Party leader Abdullah Ocalan during a demonstration against Turkish President Recep Tayyip Erdogan in central Brussels, Belgium, Nov. 17, 2016. 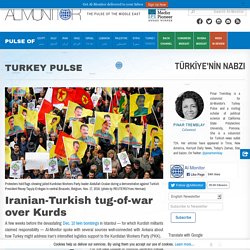 Want to renegotiate the Iran deal? Much harder than it looks. Donald Trump’s election places in immediate peril the Joint Comprehensive Plan of Action (JCPOA) reached by Iran and the P5+1 (China, France, Germany, Russia, the United Kingdom, and the United States). 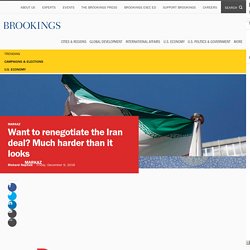 The Death Penalty in Iran. The Future of Iraq: Iran Attacks the Kurds, Maliki Ready to Lead, and the IRGC Taking Sunni Land. Fallujah has finally been liberated from ISIL. 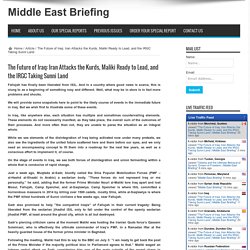 And in a country where good news is scarce, this is clung to as a beginning of something rosy and different. Well, what may be in store is in fact more problems and shocks. We will provide some snapshots here to point to the likely course of events in the immediate future in Iraq. But we wish first to illustrate some of these events. In Iraq, like anywhere else, each situation has multiple and sometimes countervailing elements. While we see elements of the disintegration of Iraq being activated now under many pretexts, we also see the ingredients of the united future scattered here and there before our eyes, and we only need an encompassing concept to fit them into a roadmap for the next few years, as well as a conscious effort to implement it, of course. Saudi Arabia & Iran: What Can Putin Do? Recent efforts to reduce tension between Saudi Arabia and Iran seem to have failed.

Even an attempt to modify Russia’s approach to the region through the candid discussion that took place between the GCC foreign ministers and Sergei Lavrov on May 26 is not expected by anyone in the region to bring any immediate results. The tension between the two sides, the GCC and Iran, is mounting steadily, as it has been for the last few years. Saudi Arabia arrested an alleged Iranian spy ring, of 30 Saudi agents working for Iran’s Revolutionary Guard Corps (IRGC), in May. Tehran claimed that Riyadh fabricated the story and that it has no spies in Saudi Arabia. Next Iranian Parliament to Be Formed of 3 Powerful Sides. The reformist Etemad Daily in an article has examined the results of parliamentary elections held earlier on Friday, February 26, across Iran, suggesting that the new parliament would witness a fair combination of reformists, conservatives, and independents.

Here is the full article: Elections and ballot boxes in Iran have always been a “button” to change the officials and authorities in those offices whose members are directly elected. It has been its function; it gives the political power to certain people, and takes it from others. The national parliament is not an exception. Iran ends vote counting in crucial twin elections. “The turnout in Tehran was around 50 percent and some 62 percent across the country which is a good turnout under the current circumstances,” Abdolreza Rahmani Fazli told reporters on Monday. He added that the two elections were held in a calm atmosphere with regulations in all electoral processes fully observed. The Iranian minister noted that the Guardian Council will soon start work to confirm the election results. Rahmani Fazli said the run-off parliamentary elections will be held for some constituencies likely in the late Iranian calendar month of Farvardin (March-April) with the coordination of the Guardian Council.

Based on the final count, all the 30 parliamentary seats related to Tehran constituency have been won by reformist and pro-government figures with former vice president Mohammad Reza Aref leading the capital city’s parliamentary list followed by Ali Motahhari, Soheila Jelodarzadeh, Alireza Mahjoub and Elias Hazrati, all reformist figures. [FLASH] Iran e Arabia Saudita: cosa è cambiato. Who really gassed the Kurds? A War Crime Or An Act of War? Who really gassed the Kurds? Syria and Iran Taken Hostage by Putin's Geopolitical Goals - Middle East - Haaretz. Full text of the Iran nuclear deal. World In the News Full text of the Iran nuclear deal The accord will end decades of economic sanctions against Iran in exchange for restrictions on its nuclear program. Rouhani, Like Countless Iranian Officials Before Him, Affirms: Iran Will Never Seek Nuclear Weapons. By Nima Shirazi | Wide Asleep in America | September 18, 2013 Speaking in Tehran to NBC’s Ann Curry in his very first interview with an American media outlet, Iranian President Hassan Rouhani again – and repeatedly, considering Ms.

Curry kept asking him the same question over and over – asserted Iran’s wholesale condemnation of nuclear arms and its commitment never to build or acquire such weaponry. Rouhani’s statements were consistent with those of nearly every high-level Iranian official and diplomat over the past twenty years. After Curry stated (totally incorrectly), “The world believes that Iran could build a bomb very quickly,” Rouhani replied: We have never pursued or sought a nuclear bomb and we are not going to do so.

Storia dell'articolo Chiudi. A Strike on Iranian Nuclear Sites Could be Catastrophic for Civilians. Clarification Appended: Sept. 28, 2012. Medical Consequences of a Nuclear Attack on Iran. Consequences of an Attack on Iran are no Joke. Antiwar. Iran, PA to Cooperate against Israel. JERUSALEM, Israel -- Palestinian Authority President Mahmoud Abbas is planning to lead a delegation to Tehran within a couple of months, according to a senior member of the Palestine Liberation Organization.

According to the report, Majdalani also blamed Israel for the failed peace process and asked Iran to support its unilateral statehood efforts with the international community. Netanyahu's Iran lobbying causing invisible but severe damage. What is Israel’s endgame regarding Iran? The nuclear deal will likely be confirmed by the US Congress, yet Prime Minister Benjamin Netanyahu is conducting an apparent no-holds-barred campaign against it, hoping to defy Capitol Hill arithmetic and inspire enough American lawmakers to thwart it.