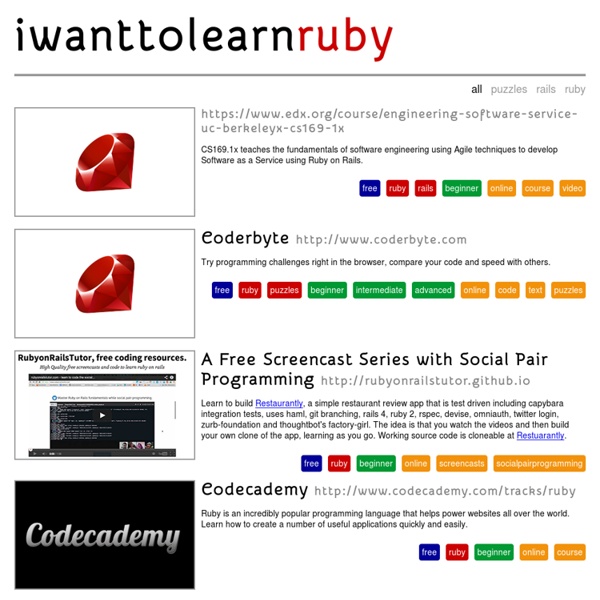 Learn Code The Hard Way -- Books And Courses To Learn To Code Ruby on Rails Guides How and Where to Learn Ruby In an online chat session between Yukihiro Matsumoto and Keiju Ishitsuka in early 1993, a discussion ensued about the name of a programming language that Matsumoto was going to write. He wanted to satisfy his desire to have an object-oriented scripting language, something that would craft virtual objects composed of data, and help them interact with one another. The alternatives at the time, Python and Perl didn’t appeal to him, Python being too object-oriented and Perl having “the smell of a toy language”. Between “Coral” and “Ruby”, Matsumoto decided to go with the latter because it was the birthstone of one of his colleagues. You have probably heard about Ruby, and you might be wondering—what is all the fuss? For starters, it’s written in a very easy-to-use, intuitive manner. For beginners who have tried teaching themselves a programming language, there are many obvious barriers like the syntax and semantics of a language. Learn ruby with code(love) Not done learning?

Learn Ruby: 29 of The Best Online Educational Resources to Learn to Ruby and Ruby on Rails | SkilledUp If you're looking to find a fast, productive, and efficient way to turn your app idea into a reality, look no further than Ruby on Rails. Rails has become the framework of choice for startups to develop projects in a matter of days. So what is Rails? It's a programming framework that comprises of reusable and easily configurable parts that are commonly used in web-based applications. Today, over 600,000 websites are estimated to be using Ruby on Rails, including some of the largest sites like GitHub, Yammer, Scribd, Shopify, Hulu, Airbnb, and Basecamp. These websites and resources come in many shapes and sizes. Courses There are many courses available to get you moving forward with Ruby on Rails, from straightforward tutorials to interactive classrooms. Some courses may have structured curricula and use video to keep you more engaged as well as help you absorb more learning material. Community Oftentimes, you're going to find yourself in a rut. Tools