Why the White House Won't Pursue GOP Senators' Iran Letter As Logan Act Violation - The Daily Banter. The Error in the Senators’ Letter to the Leaders of Iran. Approaches to Foreign Policy. Neither a cold-blooded realist nor a bleeding-heart idealist, Barack Obama has a split personality when it comes to foreign policy. 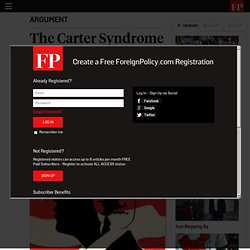 So do most U.S. presidents, of course, and the ideas that inspire this one have a long history at the core of the American political tradition. In the past, such ideas have served the country well. But the conflicting impulses influencing how this young leader thinks about the world threaten to tear his presidency apart -- and, in the worst scenario, turn him into a new Jimmy Carter. Obama's long deliberation over the war in Afghanistan is a case study in presidential schizophrenia: After 94 days of internal discussion and debate, he ended up splitting the difference -- rushing in more troops as his generals wanted, while calling for their departure to begin in July 2011 as his liberal base demanded.

Democracies of Bread. The author of Day of Honey discusses ancient Iraqi cooking, the Middle East’s dependence on imported wheat, and the link between bread and civilian uprisings. 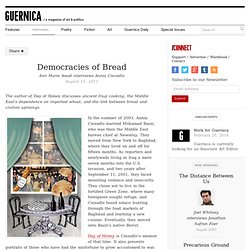 In the summer of 2003, Annia Ciezadlo married Mohamad Bazzi, who was then the Middle East bureau chief at Newsday. They moved from New York to Baghdad, where they lived on and off for fifteen months. As reporters and newlyweds living in Iraq a mere seven months into the U.S. invasion, and two years after September 11, 2001, they faced mounting violence and insecurity. They chose not to live in the fortified Green Zone, where many foreigners sought refuge, and Ciezadlo found solace hunting through the food markets of Baghdad and learning a new cuisine. 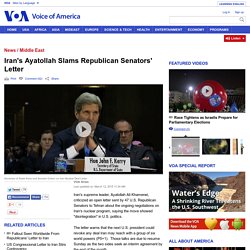 Republican Senators to Tehran about the ongoing negotiations on Iran's nuclear program, saying the move showed "disintegration" in U.S. politics. The letter warns that the next U.S. president could revoke any deal Iran may reach with a group of six world powers (P5+1). Those talks are due to resume Sunday as the two sides seek an interim agreement by the end of the month. 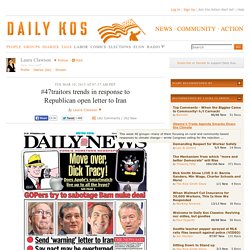 Tom Cotton and signed by 46 other Republican senators. The New York Daily News, for instance, endorsed Mitt Romney in 2012, but ran the cover you can see above. The Wall Street Journal is ... the Wall Street Journal, but it editorialized that "The problem with the GOP letter is that it’s a distraction from what should be the main political goal of persuading the American people. " It's not just media elites talking about—and condemning—the letter, either: Ouch. Cotton also seeks to punish any family member of those people, "to include a spouse and any relative to the third degree," including, "parents, children, aunts, uncles, nephews, nieces, grandparents, great grandparents, grandkids, great grandkids," Cotton said.

Yes, Cotton thinks that the great grandchildren of people who violate Iran sanctions should be imprisoned. Letters to the ayatollah, the sequel: The Republican letter to Iran's leaders reflects strategy as well as spite. In a new low for bipartisan consensus on U.S. foreign policy, 47 Republican senators have issued an “open letter” addressed to the Iranian leadership that is intended to sabotage prospects for a comprehensive nuclear deal with Iran by cultivating doubt about the credibility and reliability of the American president. 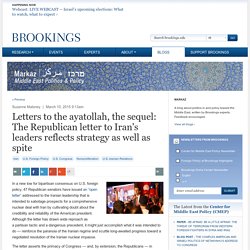 Divided on Iran, Democrats Unite Against GOP Letter. March 9, 2015 When it comes to Iran, the Senate has its Republican hawks and its Democratic hawks. 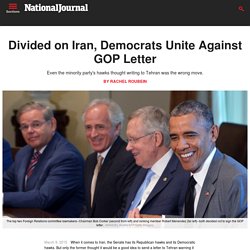 But only the former thought it would be a good idea to send a letter to Tehran warning it against cutting a nuclear deal with the Obama administration, and now those in the latter camp aren't happy about it. A total of 47 Republicans signed a letter to Iran's leaders, warning that any deal with President Obama might not outlast his presidency. On an issue that divides them, Democrats appear united in their response—including some members who have been willing to break publicly with the White House. Sen. Robert Menendez, the Senate Foreign Relations Committee's ranking member, said the Iranians don't need a letter "to be told that which they know about our government, that this government, meaning the Congress, will have a say at some point.

" "As far as I am concerned, you saw that it was a partisan letter, [that] tells you everything about it," said Menendez. Freshman Sen. Outrage over GOP's letter to Iran. 645X363 - Defense Policy Player A letter from Senate Republicans to Iran about the pending nuclear deal undermines President Obama's authority to conduct foreign policy, the White House charged Monday. 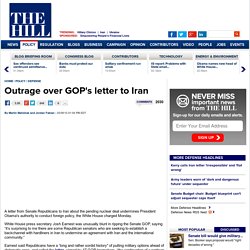 White House press secretary Josh Earnest was unusually blunt in ripping the Senate GOP, saying “it’s surprising to me there are some Republican senators who are seeking to establish a backchannel with hardliners in Iran to undermine an agreement with Iran and the international community.” Earnest said Republicans have a “long and rather sordid history" of putting military options ahead of diplomatic ones, and called the letter, signed by 47 GOP lawmakers, “the continuation of a partisan strategy to undermine the president’s authority. " The GOP letter, spearheaded by Sen. Tom Cotton (R-Ark.), warns Iranian leaders that any agreement between Washington and Tehran could be voided by Congress and simply not upheld once Obama leaves the White House in 2017. GOP dissenters: Iran letter could backfire - Burgess Everett and Michael Crowley.

Not every Senate Republican signed on to Sen. 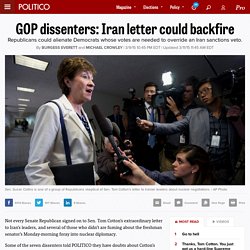 Tom Cotton’s extraordinary letter to Iran’s leaders, and several of those who didn’t are fuming about the freshman senator’s Monday-morning foray into nuclear diplomacy. Some of the seven dissenters told POLITICO they have doubts about Cotton’s move, saying there are more effective means to force President Barack Obama to address Congress’ concerns about the deal. Story Continued Below. Iran Letter Backlash Grows As Bernie Sanders Accuses Senate Republicans Of Sabotage. Sen. 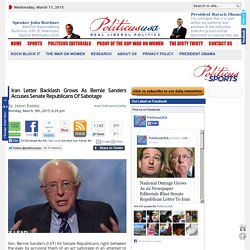 Bernie Sanders (I-VT) hit Senate Republicans right between the eyes by accusing them of an act sabotage in an attempt to start a new war in Iran. In a statement, Sen. Sanders said: It appears that for most of my Republican colleagues in the Senate, a war in Afghanistan and a war in Iraq were not enough. They now apparently want a war in Iran as well. The Republican letter to Iran draws a torrent of criticism—but was it treason? Republican senators made an unusual foray into international diplomacy yesterday when they sent an open letter to the leaders of Iran, a move that attempted to undercut US president Barack Obama and scuttle a potential deal over Iran’s nuclear program. 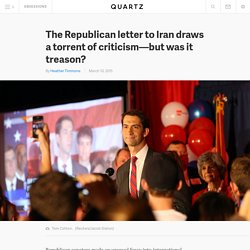 The letter warned that an agreement would require Congressional approval, and that Obama’s successor “could revoke such an executive agreement with the stroke of a pen.” Reaction came swiftly—from political analysts, Democrats, some Republicans, and Iran itself—condemning the move as short-sighted, misguided, and possibly even traitorous. The Islamic Republic of Iran Iran’s foreign minister, Javad Zarif, “expressed astonishment” at the letter, which he denounced as a “propaganda ploy”: [I]t seems that the authors not only do not understand international law, but are not fully cognizant of the nuances of their own Constitution when it comes to presidential powers in the conduct of foreign policy. Republicans Admit: That Iran Letter Was a Dumb Idea. Her name is Peche. Her long, dark hair is casually brushed to one side, revealing the subtle embroidery on her shirt collar—the words “NO!” And the outline of a cigarette. Her makeup is flawless against her bronzed skin as the soft pink background highlights a set of piercing brown eyes that gaze into the distance.

In wake of GOP letter to Iran, battle erupts over blame for dysfunction. The reaction from Washington’s foreign policy establishment was that President Obama’s authority as commander in chief had been challenged in a new and unprecedented way. Forty-seven Republican senators, openly seeking to undercut the president, signed a letter to Iran’s leaders threatening to undo any agreement reached with the United States regarding their country’s nuclear program. A battle quickly erupted over who was to blame for the dysfunction and how to defuse a situation that many foreign policy experts believe has become so poisonous that it has begun to damage the United States’ standing in the world. Even against the backdrop of a long list of fiscal and foreign policy battles between the White House and Republicans, the latest standoff seemed exceptional.

Cotton, from the state of Arkansas, authored the open letter to Iranian officials, criticizing U.S. President Barack Obama’s attempts to reach a deal on nuclear power with the country. IRNA accused Cotton of trying to "humiliate" Zarif by posting a Farsi version of his letter and by tweeting directly to Zarif: "This is the translation of the letter if necessary. " "Now it is clear that Cotton does not know that the Iranian foreign minister has been a U.S. educated figure since young age and he knows English language and the U.S. power structure better than Cotton," IRNA reported.

And the Tehran Times reported that Zarif said the U.S. senators were “ignorant of international law.” P5+1 group. Precedent for GOP’s Iran letter hard to find, historians say. WASHINGTON — The U.S. Senate Historian’s Office has so far been unable to find another example in the chamber’s history where one political party openly tried to deal with a foreign power against a presidential policy, as Republicans have attempted in their open letter to Iran this week The letter sent by 47 Republican senators sets out to instruct Iranian leaders about how the U.S. Constitution works. They wrote that the deal currently being negotiated with their government by the U.S. and western allies, to limit Iran’s nuclear expansion could be undone by Congress.

REUTERS/Denis Balibouse. Arkansas Senator Tom Cotton gets tough with European “rogue nations” Arkansas Senator Tom Cotton, against the advice of most of his colleagues, has stretched both his literary and political muscle this past weekend, by drafting letters to the Duchy of Grandwick, and Latveria, warning them against signing any treaties with the Obama administration. “Sarah Palin with a Harvard degree”: Why new senator Tom Cotton is so frightening. File charges against the 47 U.S. Senators in violation of The Logan Act in attempting to undermine a nuclear agreement. McConnell borrows from 'Tom Cotton's playbook'