CIA and Contras cocaine trafficking in the US 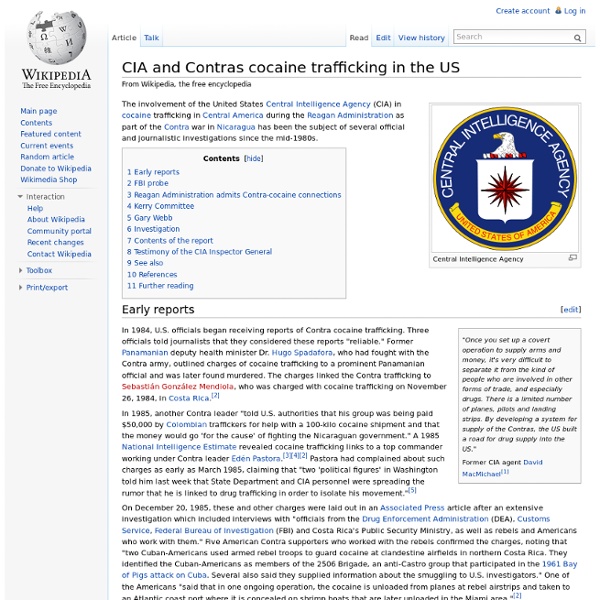 Central Intelligence Agency The involvement of the United States Central Intelligence Agency (CIA) in cocaine trafficking in Central America during the Reagan Administration as part of the Contra war in Nicaragua has been the subject of several official and journalistic investigations since the mid-1980s. Early reports[edit] "Once you set up a covert operation to supply arms and money, it's very difficult to separate it from the kind of people who are involved in other forms of trade, and especially drugs. There is a limited number of planes, pilots and landing strips. By developing a system for supply of the Contras, the US built a road for drug supply into the US." In 1984, U.S. officials began receiving reports of Contra cocaine trafficking. In 1985, another Contra leader "told U.S. authorities that his group was being paid $50,000 by Colombian traffickers for help with a 100-kilo cocaine shipment and that the money would go 'for the cause' of fighting the Nicaraguan government."

Iran–Contra affair The Iran–Contra affair (Persian: ایران-کنترا‎, Spanish: caso Irán-Contra), also referred to as Irangate,[1] Contragate[citation needed] or the Iran–Contra scandal, was a political scandal in the United States that came to light in November 1986. During the Reagan administration, senior administration officials secretly facilitated the sale of arms to Iran, the subject of an arms embargo.[2] Some U.S. officials also hoped that the arms sales would secure the release of several hostages and allow U.S. intelligence agencies to fund the Nicaraguan Contras. Under the Boland Amendment, further funding of the Contras by the government had been prohibited by Congress. The scandal began as an operation to free the seven American hostages being held in Lebanon by a group with Iranian ties connected to the Army of the Guardians of the Islamic Revolution. Several investigations ensued, including those by the U.S. Background[edit] Arms sales to Iran[edit] A BGM-71 TOW anti-tank guided missile

IndieGoGo wants to give Kickstarter a run for its money Crowdfunding, the process of raising funds by collecting small amounts of money from many people, has become quite popular in recent years, and the poster child for the industry is New York City-based Kickstarter. But there are several other lesser well known startups beyond Kickstarter, like the crowdfunding veteran IndieGoGo. Founded in January 2008, San Francisco-based startup IndieGoGo is aiming to be the big, general player in the space, in contrast to other crowdfunding platforms that define themselves by the niche of the campaigns they serve. “We’re really aiming to empower the dreams of many, whether it be a through getting money for a liver transplant, or a new album, or a restaurant,” CEO Slava Rubin told me in an interview this week. The all-things-to-all-people strategy seems to be steadily picking up. To wit: Fractured Atlas, IndieGoGo’s partner for processing tax deductible contributions, recently surpassed the $1 million mark for charitable causes funded via IndieGoGo.

GigaOM Gigaom is a blog-related media company started by Om Malik in San Francisco, California.[1] The blog offers news, analysis, and opinions on startups, emerging technologies, and other technology related topics. It is listed on CNet's Blog 100 list.[2] History[edit] Gigaom originally integrated a number of other technology-related blogs and services into its network. In June 2006, Malik left his day job to work on Gigaom full-time.[3] Since 2006, Gigaom has organized technology conferences under the banner Gigaom Events.[4] The events division now produces six events annually: Gigaom RoadMap, paidContent Live, Mobilize, and the Structure series (Structure, Structure:Data and Structure:Europe).[5] In 2008, Malik appointed Paul Walborsky as CEO of the company [6] and in 2009, the company launched GigaOM Pro, a subscription-based technology research service. [7] On February 8, 2012, Gigaom acquired PaidContent through the acquisition of ContentNext Media. [8] See also[edit] References[edit]

CLANG by Subutai Corporation Hi, Neal Stephenson here. My career as an author of science and historical fiction has turned me into a swordsmanship geek. As such, I'm dissatisfied with how swordfighting is portrayed in existing video games. These could be so much more fun than they are. Time for a revolution. In the last couple of years, affordable new gear has come on the market that makes it possible to move, and control a swordfighter's actions, in a much more intuitive way than pulling a plastic trigger or pounding a key on a keyboard. CLANG will begin with the Queen of Weapons: the two-handed longsword used in Europe during late medieval and early renaissance times. At first, it'll be a PC arena game based on one-on-one multiplayer dueling (which is a relatively simple and attainable goal; we don't want to mess this up by overreaching). "How will this be different than SoulCalibur?" Low-latency, high-precision motion controller: Critical to a satisfying sword fight is fast, accurate response. Thanks to: Nanda

DETROPIA - We're Releasing our Doc Independently by Loki Films DETROPIA is a labor of love, over 3 years in the making. In 2009 Heidi - a native Detroiter - and Rachel set out to explore the rise and fall (and rise again?) of Detroit, one of America's most iconic cities. Our pledgers have done the unthinkable and brought us to our goal in only 14 days. Every penny that continues to come in for the remainder of this campaign will go towards more cities, more screenings. The story of Detroit is the story of all of us. We have little over a week left. With gratitude, Heidi and Rachel Here is more about DETROPIA: While the city of Detroit continues to face real and serious challenges there is still so much hope there. "The film’s vibrant, gutsy characters glow and erupt like flames from the ashes. This film is our truly most independent (and visual) work and a creative departure for us – we wanted it to be a springboard for conversation about where we are headed as a nation. This all takes resources. xxooxox

How I feel on a daily basis.. Guy tries out "Bark Control" collar : videos TIL a school in Mississippi put together a fake prom only to invite the gay and disabled students, while the rest of the school went to prom at a secret location. (#6) : todayilearned