5 things Netanyahu forgot to tell the American people — RT Op-Edge. Robert Bridge has worked as a journalist in Russia since 1998. 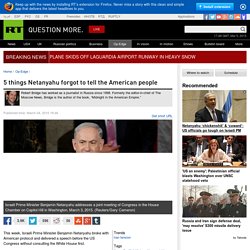 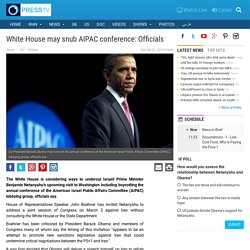 Iranian Troops Besiege Israel, 130,000 Basij Fighters to Enter Syria: Zio-Study. From the Mediterranean to the Golan, Iran builds active front and direct military presence on the Zionist entity's border to deter and eliminate the Israeli Regime, according to an Israeli study published by the Middle East Media Research Institute. 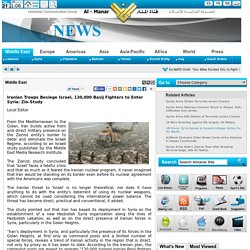 The Zionist study concluded that 'Israel' faces a fateful crisis and that as much as it feared the Iranian nuclear program, it never imagined that Iran would be standing on its border even before its nuclear agreement with the Americans was complete. The Iranian threat to 'Israel' is no longer theoretical, nor does it have anything to do with the entity's deterrent of using its nuclear weapons, which cannot be used considering the international power balance. The threat has become direct, practical and conventional, it added.

After the recent campaign in southern Syria, Iran's direct deployment in the Golan creates a single battle front against Israel from Rosh Hanikra to Quneitra, the study noted. Greece, eurozone officials agree to extend bailout by 4 months — RT Business. Basij Commander: Millions of Iranians Ready to Deploy in Gaza. Commander of Iran's Basij (volunteer) force Brigadier General Mohammad Reza Naqdi said millions of Iranian people are ready to be sent to Gaza to help the Palestinians in their fight against the Zionist regime, FARS news agency reported. 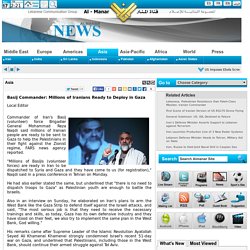 "Millions of Basijis (volunteer forces) are ready in Iran to be dispatched to Syria and Gaza and they have come to us (for registration)," Naqdi said in a press conference in Tehran on Monday. He had also earlier stated the same, but underlined that "there is no need to dispatch troops to Gaza" as Palestinian youth are enough to battle the Israelis. Dubai policeman, fake agents rape Iranian woman.

Three men, including a Dubai policeman and two fake officers, have kidnapped two young female Iranian tourists and raped one of them. 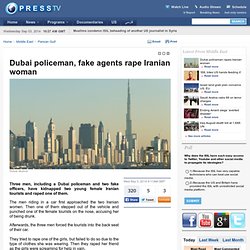 The men riding in a car first approached the two Iranian women. Then one of them stepped out of the vehicle and punched one of the female tourists on the nose, accusing her of being drunk. Afterwards, the three men forced the tourists into the back seat of their car. Iranian Response to Israeli Drone Will be in Occupied Territories: Commander. Iran releases pictures of downed Israeli ‘Hermes’ drone. The Israeli spy drone shot down by Iran’s Islamic Revolution Guards Corps (IRGC) is an Israeli-made Hermes drone, says an Iranian commander. 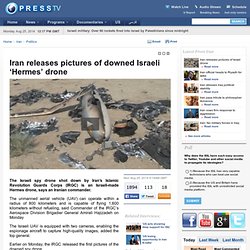 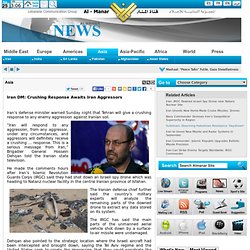 “Iran will respond to any aggression, from any aggressor, under any circumstances, and aggressors will definitely receive a crushing … response. This is a serious message from Iran,” Brigadier General Hossein Dehqan told the Iranian state television. Iranian Defense Minister: Zionist Aggression on Gaza Shows Entity’s Failure. Iran’s defense minister says Israeli fresh aggression against the Palestinians in the Gaza Strip shows the Zionist entity's frustration in face of the Palestinian resistance. 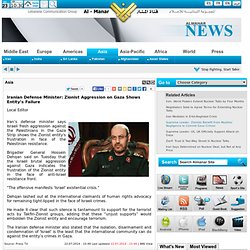 Brigadier General Hossein Dehqan said on Tuesday that the Israeli brutal aggression against Gaza indicates the frustration of the Zionist entity in the face of anti-Israel resistance front. "The offensive manifests 'Israel' existential crisis. " Dehqan lashed out at the international claimants of human rights advocacy for remaining tight-lipped in the face of Israeli crimes. He made it clear that such silence is tantamount to support for the terrorist acts by Takfiri-Zionist groups, adding that these “unjust supports” would embolden the Zionist entity and encourage terrorism. Zarif in Vienna: Iran Won’t Kneel in Submission to a Deal with Powers. Iran and six world powers resumed talks on Thursday aimed at clinching a long-term deal later this month. 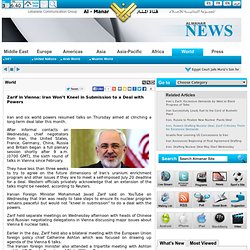 After informal contacts on Wednesday, chief negotiators from Iran, the United States, France, Germany, China, Russia and Britain began a full plenary session shortly after 9 a.m. (0700 GMT), the sixth round of talks in Vienna since February. They have less than three weeks to try to agree on the future dimensions of Iran's uranium enrichment program and other issues if they are to meet a self-imposed July 20 deadline for a deal. Media is the most dangerous weapon. Don't trust it. Rouhani Warns Petrodollar Backers of Terrorism: It Will Strike Your Countries. Iran president Sheikh Hasan Rouhani on Sunday warned the owners of petro-dollars against supporting violence and terrorism, adding that their countries will later the atrocities of the terrorist groups. 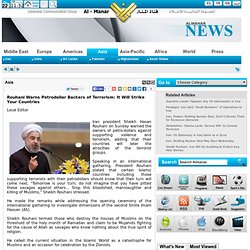 TEHRAN – Iranian Foreign Minister Mohammad Javad Zarif says the foreign policy adopted by the government of President Hassan Rouhani has unsettled Israeli Prime Minister Benjamin Netanyahu and has isolated him in the international arena. In an address to an open session of the Iranian parliament on Tuesday, Zarif said this development is a “great victory” for all revolutionary forces in the region. “Iran is a stable and mighty country, but widespread propaganda and political activities are underway to depict Iran as a threat to the region and a danger for international peace and stability,” he stated.

Dozens of casualties feared as fire sweeps through north Iran. Published time: May 06, 2014 17:46 Edited time: May 06, 2014 18:18 Google map An explosion and subsequent fire has torn through Qazvin, north Iran, according to local news agencies. Authorities expect high numbers of casualties. Unconfirmed local reports stated that as many as 50 could have been injured in the city, which is considered a commercial hub. “Iran One of Only 2 World Countries in Possession of Unique Torpedo” Senior Islamic Revolution Guards Corps (IRGC) officials said the IRGC Navy is equipped with state-of-the-art weapons and vessels, and is one of the only two world military forces equipped with a unique torpedo which moves with unbelievable velocity.

Speaking to Fars news agency, IRGC Navy Commander Rear Admiral Ali Fadavi said when the home-made missile/torpedo, Hout, was displayed in a series of wargames a few years ago, over 2,000 world media covered the news. He said the speed of the missile is 100 meters per second (360km/h) under water. The Admiral explained that the gruesome weapons has originally been made by the Russians, adding that Americans have spent a sum of 20 billion dollars in 15 years to develop its technology, but failed.

Ashton from Iran: No Guarantee Talks will Reach to Final Nuclear Accord. EU foreign policy chief Catherine Ashton said on Sunday there is "no guarantee" that talks with Iran on its nuclear program will lead to a comprehensive agreement. "This interim agreement is really important but not as important as a comprehensive agreement (which is)... difficult, challenging, and there is no guarantee that we will succeed," Ashton told a joint news conference in Tehran with Iranian Foreign Minister Mohammad Javad Zarif. إيران وسوريا.. الصواريخ تسلك الطريق نحو فلسطين!! جهاد مراد. إيران وسوريا.. الصواريخ تسلك الطريق نحو فلسطين!!