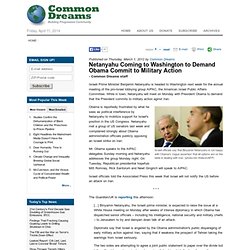 While in town, Netanyahu will meet on Monday with President Obama to demand that the President commits to military action aginst Iran. Israeli officials say that Binyamin Netanyahu is not happy with Obama's 'vague assertion' that all options are on the table in dealing with Iran. (photo/Jim Watson/AFP) Obama is reportedly frustrated by what he sees as political interference by Netanyahu to mobilize support for Israel's position in the US Congress. Netanyahu met a group of US senators last week and complained strongly about Obama administration officials publicly opposing an Israeli strike on Iran. 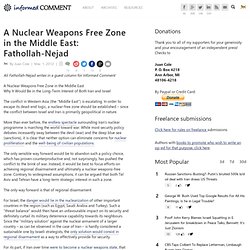 John BOLTON Dodges Question From Vet & Insults Him-Fox Edits Out Booing & Replaces It With Applause. Then they are truly fekked. 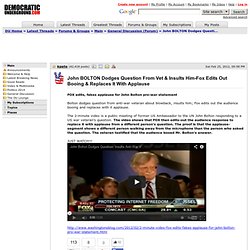 A lie can hurt millions of people. Lying about iraq has cost this country and iraq, thousands of lives and has cost us billions of dollars. What lie would be for the "right" reason, and for whom? So, the truth, even if they don't like it; is worse than the lies told. We, as a country, have truly gone down the rabbit hole, when americans who proudly wear those flag pins or wave it on their auto; seem to be okay with lying propaganda that pushes an agenda that helps global corporations OVER THEIR OWN DAMN COUNTRY AND ITS' PEOPLE!!! The Economic Crisis and Iran. On February 21, to great media fanfare, the Dow Jones Industrial Average surpassed the 13,000 mark for the first time since the 2008 collapse. 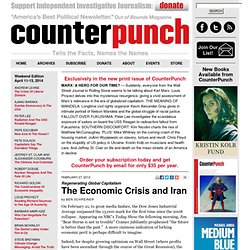 Appearing on NBC’s Today Show the following morning, Jim “Bear Sterns is not in trouble” Cramer jubilantly prophesied “the future is better than the past.” A more ominous indication of lurking economic peril is perhaps difficult to imagine. Indeed, for despite growing optimism on Wall Street (where profits have been ascendant through the course of the Great Recession), the economy remains teetering precariously on the precipice. The potential collapse of the eurozone, along with mounting signs of a bursting Chinese growth bubble both still loom along the horizon.

Each of which could threaten to send the world economy barreling toward the abyss. In fact, given the protracted nature of the current crises, it is increasingly evident that we are in the thralls of a systemic crisis. Nowhere is this more apparent than Greece. Www.informationclearinghouse.info/article30658.htm. Utah group sends anti-war message with ‘Bomb Iran’ billboard. 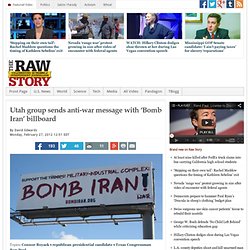 The Slide to War. Wars are fought because some people decide it is in their interests to fight them. 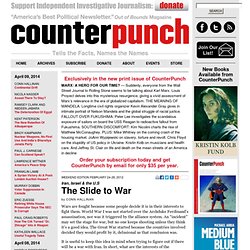 World War I was not started over the Archduke Ferdinand’s assassination, nor was it triggered by the alliance system. An “incident” may set the stage for war, but no one keeps shooting unless they think it’s a good idea. The Great War started because the countries involved decided they would profit by it, delusional as that conclusion was. It is useful to keep this idea in mind when trying to figure out if there will be a war with Iran. Behind the Deepening Crisis with Iran: the Real Story Versus the Cover Story. 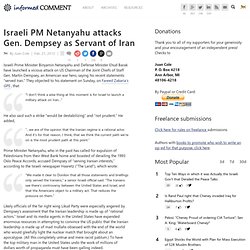 Martin Dempsey, an American war hero, saying his recent statements “served Iran.” They objected to his statement on Sunday, on Fareed Zakaria’s GPS , that “I don’t think a wise thing at this moment is for Israel to launch a military attack on Iran…” He also said such a strike “would be destabilizing” and “not prudent.” He added, Erin Burnett: Worst of the worst. (updated below – Update II [Sat.]) New Weasel Word on Iran Nukes. What can one say when the Washington Post’s neoconservative editorial writers more correctly describe the U.S. and Israeli assessments on Iran’s nuclear program than does a news story in the New York Times?

In a Wednesday morning surprise, a Washington Post editorial got the nuances, more or less, right in stating: “U.S. and Israeli officials share an assessment that, though Iran is building up nuclear capability, it has not taken decisive steps toward building a bomb.” You could still say the Post is hyping things a bit, skewing the wording in an anti-Iranian direction, but the sentence is essentially correct on where U.S. and Israeli intelligence judgments stand, that Iran has NOT made a decision to build a nuclear bomb. But then there’s the New York Times. It continues to mislead its readers, albeit with a new weasel word inserted to avoid being accused of completely misstating the facts. There’s a parallel here to President George W. Intelligence Assessments Less Alarming Consensus. U.S. media takes the lead on Iran. Many have compared the coordinated propaganda campaign now being disseminated about The Iranian Threat to that which preceded the Iraq War, but there is one notable difference. 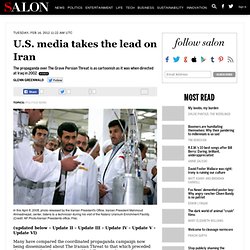 Whereas the American media in 2002 followed the lead of the U.S. government in beating the war drums against Saddam, they now seem even more eager for war against Iran than the U.S. government itself, which actually appears somewhat reluctant. Consider this highly illustrative, one-minute report yesterday from the nightly broadcast of NBC News with Brian Williams, by the network’s Chief Pentagon Correspondent Jim “Mik” Miklaszewski, which packs multiple misleading narratives into one short package:

BFP Breaking News: The New Desperate Concoction for War on Iran. War Architects Have Written a New Script- This Time with Azerbaijan in the Lead Actor Role The imperial establishment’s desperation to militarily go after and take over the last ‘real’ domino – Iran, has truly reached a peak, and with that desperation comes a new farfetched and fantastical scenario. 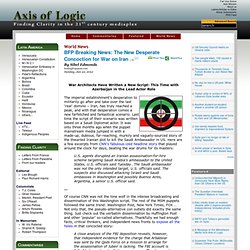 Last time the script of their scenario was written based on a Saudi Diplomat actor. It was only three months ago when the puppet mainstream media jumped in with a made-up, dubious, far-reaching, murkily and vaguely-sourced story of the thwarted Iranian plot to kill the Saudi Ambassador in US. Twin Cites anti-war leader speaks out against U.S. threats against Iran. Jess Sundin of the Anti War Committee (Fight Back! 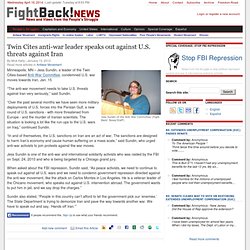 News/Staff) Minneapolis, MN – Jess Sundin, a leader of the Twin Cities-based Anti-War Committee, condemned U.S. war moves towards Iran, Jan. 15 “The anti-war movement needs to take U.S. threats against Iran very seriously,” said Sundin. “Over the past several months we have seen more military deployments of U.S. forces into the Persian Gulf, a new round of U.S. sanctions - with more threatened from Europe - and the murder of Iranian scientists. Elect Romney, Get War in Iran? February 5, 2012 | Like this article? Join our email list: Stay up to date with the latest headlines via email. Should Mitt Romney make it to the White House, his Middle East policy and plan for Iran may be as hawkish as that of Bush Junior, thanks to Eliot Cohen.

In 2005, a group of graduate students at Johns Hopkins University’s School of Advanced and International Studies (SAIS) participated in the school’s annual diplomatic simulation. IRAN: US/Israeli False Flag Attack May Be Underway. Several warnings of an imminent “false flag” attack by the Israeli-influenced United States on one of its own warships, which will be attributed to Iran, have been reported by several reliable sources. In recent years “false-flag” terrorism has been utilized multiple times by US and Israeli political actors to provide pretexts for otherwise unjustifiable, anti-Islamic military excursions. War on Iran: It’s Not A Matter of “If” The world’s press is choc-a-bloc with “if” questions about Iran and war. Will Israel attack? Is Obama, coerced by domestic politics in an election year, being dragged into war by the Israel lobby? The US-Iran Economic War. Analysis: Iran could close Hormuz. No EU Deal on Iran Oil Embargo Yet. Pushing Iran towards a nuclear bomb.

New Haven, Connecticut - The United States and its Western allies have utilised nearly every tool at their disposal to stop Iran from obtaining nuclear weapons, from sanctions and sabotage to cyber attacks and assassinations. Attack Iran? Ask Congress to Declare War. Obama Seeks to Distance U.S. from Israeli Attack on Iran. Washington DC. Iran to hold new wargames soon in key oil waterway. By Agence France-PresseFriday, January 6, 2012 7:18 EDT Iran is to hold fresh military exercises in and around the strategic Strait of Hormuz within weeks, the naval commander of its powerful Revolutionary Guards was quoted as saying on Friday. The manoeuvres are to be held in the Iranian calendar month that runs from January 21 to February 19, the Fars news agency quoted Ali Fadavi as saying. Israel and US to stage major defense drill. Sanctioning Iran: An Interview on Iran's Ruling Bloc, Internal Strife, and International Pressure. On the last day of 2011, US President Obama signed into law a military authorization bill containing a provision that imposes new sanctions presumably in order to punish Iran for its nuclear program.

Jahanpour: As US and Iran Confront Each other, where is the Diplomacy? Dr.