Spy Fail: Why Iran Is Losing Its Covert War with Israel. Slumped in a Nairobi courtroom, suit coats rumpled and reading glasses dangling from librarian chains, the defendants made a poor showing for the notorious Quds Force of the elite Iranian Revolutionary Guard Corps. 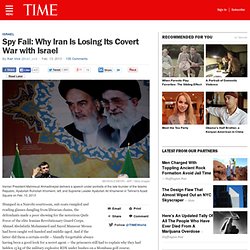 Ahmad Abolafathi Mohammed and Sayed Mansour Mousa had been caught red-handed and middle-aged. And if the latter did them a certain credit — blandly forgettable always having been a good look for a secret agent — the prisoners still had to explain why they had hidden 15 kg of the military explosive RDX under bushes on a Mombasa golf course. Created to advance Iran’s interests clandestinely overseas, the Quds Force has lately provided mostly embarrassment, stumbling in Azerbaijan, Georgia, India, Kenya and most spectacularly in Thailand, where before accidentally blowing up their Bangkok safe house, Iran’s secret agents were photographed in the sex-tourism mecca of Pattaya, one arm around a hookah, the other around a hooker.

Iran kicks off massive air defense drill. Ahmadinejad admits Western sanctions have taken their toll on Iran as country¿s economy is on verge of collapse. President Mahmoud Ahmadinejad blames the dip in the economy on sanctions from the U.S. and its alliesDuring a U.N. summit last week President Ahmadinejad was greeted by anti-nuclear protests By Mail Foreign Service Published: 18:20 GMT, 2 October 2012 | Updated: 00:36 GMT, 4 October 2012. 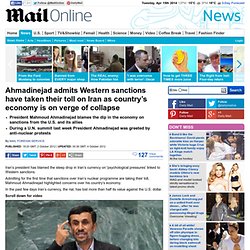 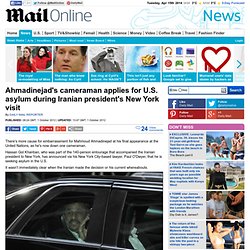 Hassan Gol Khanban, who was part of the 140-person entourage that accompanied the Iranian president to New York, has announced via his New York City-based lawyer, Paul O'Dwyer, that he is seeking asylum in the U.S. Iran's Moral Police combat the "virus" of Western-oriented women. How much freedom to women have in Iran? In Iran, women who dress themselves in a manner deemed immodest must reckon with reprisals from the Iranian Moral Police and the Revolutionary Guards. For more than 30 years there has been a public feud between women who challenge the rules, and the repressive forces in charge of enforcing them. Again and again the Islamist rulers have ordered stricter enforcement measures, often resulting in mass arrests. According to Iranian police Chief Ismael Ahmadi Moqadam , Iran now wants to ratchet up its fight against women who it believes dress in an un-Islamic way.

Moqadam says that his forces require the assistance of Iran’s "moral capital and pious people,” and that the regime “must not allow the virus to spread by badly worn headscarves . " On June 19 th , Iranian news agency Fars News quoted the police chief as saying: "We are keen to fulfill our legal and religious duty and we will behave in this way very carefully, so that no one protests. " Iran's crazed gay bashers. Homosexuality is met harshly in Iran The ideologues of the Islamic regime in Iran know all too well how to use external enemies to persecute enemies closer to home. According to those in power, the Jews, the Israelis, the United States, and even the West more generally are the causes of Iran’s domestic problems. One such “problem”, as perceived by Tehran at least, is homosexuality – of which the West is considered to be the root cause. This of course implies that homosexuality has not existed in Iran and the Arab world for thousands of years, until very recently.

In this regard, anti-Americanism and anti-Semitism are the tools that the Islamist rulers of Iran use to legitimise the execution of homosexuals. The Iranian news agency Mashregh News, an organisation with close ties to the Revolutionary Guard, recently published an article entitled, “Open and covert dimensions of homosexuality.” Iran claims 'saboteurs' have infiltrated International Atomic Energy Agency after two attempts to blow up power lines linking the country's nuclear facilities. 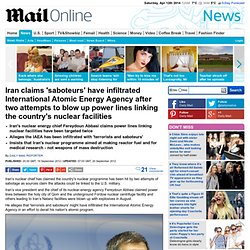 Storming of British Embassy in Iran: This rabid rogue state could tip the world into a new dark age. By Michael Burleigh Updated: 10:51 GMT, 2 December 2011 As Britain orders the closure of Iran’s embassy in London and expels its diplomats after frenzied mobs attack the UK’s diplomatic compounds in Tehran, MICHAEL BURLEIGH sees in Iran a desperate regime that is lashing out - and dangerous. 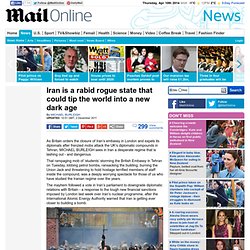 That rampaging mob of ‘students’ storming the British Embassy in Tehran on Tuesday, lobbing petrol bombs, ransacking the building, burning the Union Jack and threatening to hold hostage terrified members of staff inside the compound, was a deeply worrying spectacle for those of us who have studied the Iranian regime over the years. What have they got to hide? UN nuclear weapons inspectors leave Iran after being turned away from key military base.

International Atomic Energy Agency inspectors refused access to ParchinIntelligence suggests nuclear weapons in development at siteUN watchdog declares two-day meeting a failureFurther talks are NOT on the tableEvolving conflict like 'slow-motion Cuban Missile Crisis By Lee Moran Updated: 10:25 GMT, 22 February 2012 Iran has denied inspectors from the United Nations' nuclear watchdog access to a key military site - ratcheting up tensions between Tehran and the West and effectively ending a working dialogue. 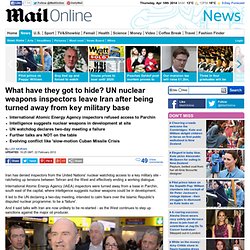 International Atomic Energy Agency (IAEA) inspectors were turned away from a base in Parchin, south east of the capital, where intelligence suggests nuclear weapons could be in development. It led to the UN declaring a two-day meeting, intended to calm fears over the Islamic Republic's disputed nuclear programme, to be a 'failure'.

US flying blind in Iran and Lebanon after CIA ops busted :