One photographer's journey inside Iran - The Big Picture. New Zealand photographer, Amos Chapple, made three visits to the Islamic Republic of Iran between December 2011 and January 2013. 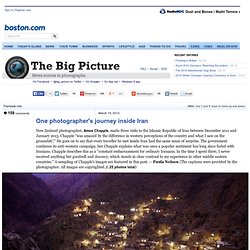 Chapple "was amazed by the difference in western perceptions of the country and what I saw on the groundâ€¦" He goes on to say that every traveller he met inside Iran had the same sense of surprise. The government continues its anti-western campaign, but Chapple explains what was once a popular sentiment has long since faded with Iranians. Chapple describes this as a "constant embarrassment for ordinary Iranians. In the time I spent there, I never received anything but goodwill and decency, which stands in clear contrast to my experience in other middle eastern countries. " A sampling of Chapple's images are featured in this post. -- Paula Nelson (The captions were provided by the photographer. Palangan Village, in the mountains near the Iraq border. Winter Wonderland: Iran’s Best Kept Secret. As an Iranian, I get asked all sorts of questions about my home country. 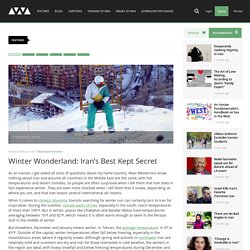 Most Westerners know nothing about Iran and assume all countries in the Middle East are the same, with hot temperatures and desert climates. So people are often surprised when I tell them that Iran does in fact experience winter. Photo Gallery - Iran Traveler. Photo Gallery The following is a slideshow viewer of photos I've taken that are representative of the beautiful landscapes and cityscapes found in Iran. 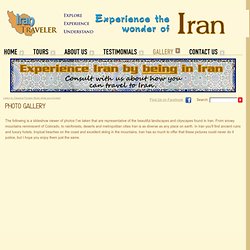 Iran: the new must-see holiday destination? The idea of a holiday in Iran might sound unlikely, but despite the Foreign Office’s advice against all but essential travel, tourists are rushing to discover the riches of Iran and the surprises this modern theocracy unleashes at every turn. 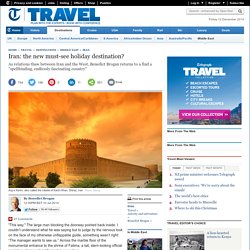 Even Americans, admittedly under controlled conditions, are welcome. And so I found myself, in the week when Iraq went up in flames, travelling through the heart of its neighbour and bitter enemy, amazed by how relaxed the country I first visited more than 20 years ago has become. Back then, on a tour of the same cities in 1992, the revolution and the war with Iraq were vivid memories, Khomeini had died just three years before and Iran was far more outwardly conservative. 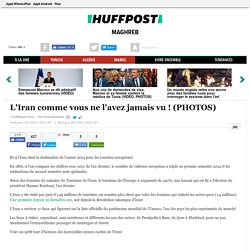 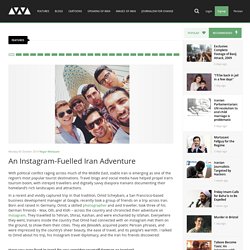 Travel blogs and social media have helped propel Iran’s tourism boom, with intrepid travellers and digitally savvy diaspora Iranians documenting their homeland’s rich landscapes and attractions. In a recent and vividly captured trip in that tradition, Omid Scheybani, a San Francisco-based business development manager at Google, recently took a group of friends on a trip across Iran. Born and raised in Germany, Omid, a skilled photographer and avid traveller, took three of his German frirends - Max, Olli, and Klöh – across the country and chronicled their adventure on Instagram.

They travelled to Tehran, Shiraz, Kashan, and were enchanted by Isfahan. Everywhere they went, Iranians inside the country that Omid had connected with on Instagram met them on the ground, to show them their cities. En Iran, les derniers zoroastriens entretiennent toujours le feu sacré. An other view of Iran (18 Photos) Hossein Fatemi photographer will show you what is hidden from the eyes of Big Brother, whatever it is that young Iranians behind the closed doors of their houses and clubs. 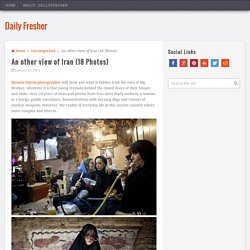 Over 20 years of news and photos from Iran were fairly uniform: a woman in a burqa, public executions, demonstrations with burning flags and rumors of nuclear weapons. However, the reality of everyday life in this ancient country where more complex and diverse. Woman during a ceremony Chehel Manbar that passes in front of Ashura in Khorramabad. By tradition, the Iranian woman barefoot lighting 40 candles in certain places in the city center. The ceremony begins early in the morning and lasts all day. Woman in a beauty salon, where men have no right to go. Drunken girls enjoying the party. Rock band at a private concert. Girls at the gym, where women are trained exclusively. Girls playing billiards in the recreation hall for men, where the girls entrance is strictly prohibited nastrogo.

View on Tehran Milad Tower. by.