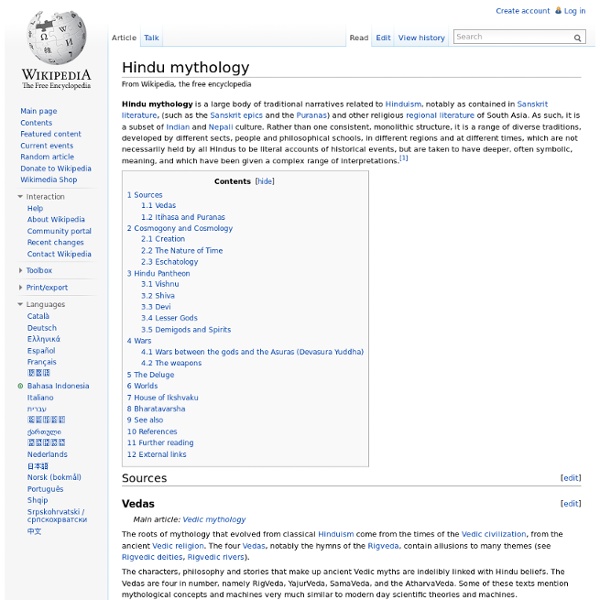 Hindu mythology is a large body of traditional narratives related to Hinduism as contained in Sanskrit literature (such as the epics like Mahabharata and Ramayana, the Puranas, and the Vedas), Ancient Tamil literature (such as the Sangam literature and Periya Puranam), several other works, most notably the Bhagavata Purana, claiming the status of a Fifth Veda and other religious regional literature of South Asia. As such, it is a subset of Indian and Nepali culture. Rather than one consistent, monolithic structure, it is a range of diverse traditions, developed by different sects, people and philosophical schools, in different regions and at different times, which are not necessarily held by all Hindus to be literal accounts of historical events, but are taken to have deeper, often symbolic, meaning, and which have been given a complex range of interpretations.[1] Sources[edit] Vedas[edit] Itihasa and Puranas[edit] The epics themselves are set in different Yugas, or periods of time. Related:  Arabian, Hindi & Persian (pre Iraq & Iran) • Hinduism

Persian mythology Persian mythology are traditional tales and stories of ancient origin, all involving extraordinary or supernatural beings. Drawn from the legendary past of Iran, they reflect the attitudes of the society to which they first belonged - attitudes towards the confrontation of good and evil, the actions of the gods, yazats (lesser gods), and the exploits of heroes and fabulous creatures. Myths play a crucial part in Iranian culture and our understanding of them is increased when we consider them within the context of Iranian history. For this purpose we must ignore modern political boundaries and look at historical developments in the Greater Iran, a vast area covering parts of Central Asia well beyond the frontiers of present-day Iran. Key texts[edit] The central collection of Persian mythology is the Shahnameh of Ferdowsi, written over a thousand years ago. Religious background[edit] The characters of Persian mythology almost always fall into one of two camps. Good and Evil[edit]

Hinduism Hinduism is the dominant religion, or way of life,[note 1] in South Asia, most notably India. It includes Shaivism, Vaishnavism and Shaktism among numerous other traditions, and a wide spectrum of laws and prescriptions of "daily morality" based on karma, dharma, and societal norms. Hinduism is a categorisation of distinct intellectual or philosophical points of view, rather than a rigid, common set of beliefs. Hinduism, with about one billion followers[web 1] is the world's third largest religion, after Christianity and Islam. Hinduism has been called the "oldest religion" in the world,[note 2] and some practitioners refer to it as Sanātana Dharma, "the eternal law" or the "eternal way"[3] beyond human origins. Etymology The word Hindu is derived (through Persian) from the Indo-Aryan/Sanskrit word Sindhu, the Indo-Aryan name for the Indus River in the northwestern part of the Indian subcontinent (modern day Pakistan and Northern India). Definitions Colonial influences Sanātana Dharma Moksha

Islamic mythology Islamic mythology is the body of traditional narratives associated with Islam from a mythographical perspective. Many Muslims regard these narratives as historical and sacred and believe they contain profound truths. These traditional narratives include, but are not limited to, the stories contained in the Qur'an. Followers of Islam (Muslims) believe that Islam, in its current form, was established by God, through the prophet Muhammed, who lived in the 6th and 7th centuries CE.[1] Muslims believe that all true prophets (including Musa and Isa) preached Islamic principles that were applicable in their time but when the times changed and people needed new guidance for new situations, God appointed a new prophet with a new code of life that could guide them. Muhammad is the most recent and final prophet, who restored and completed the principles of Islam.[2] Central Islam stories[edit] Life of Muhammad[edit] The Kaaba[edit] Connection with Jewish and Christian mythologies[edit] See also[edit]

Vedic mythology Vedic mythology refers to the mythological aspects of the historical Vedic religion and Vedic literature, alluded to in the hymns of the Rigveda. The central myth at the base of Vedic ritual surrounds Indra who, inebriated with Soma, slays the dragon (ahi) Vrtra, freeing the rivers, the cows and Dawn. It has directly[dubious ] contributed to the evolution and development of later Hinduism and Hindu mythology. Vedic mythology[edit] The Vedas in Puranic mythology[edit] The Vishnu Purana attributes the current arrangement of four Vedas to the mythical sage Vedavyasa.[2] Puranic tradition also postulates a single original Veda that, in varying accounts, was divided into three or four parts. Rig, Sama, Yajur and Atharva constitute the "Four Vedas".[3] The Rig Veda (mantras) is a collection of inspired songs or hymns and is a main source of information on the Rig Vedic civilization. See also[edit] References[edit] Further reading[edit] Buitenen, J.

33 Devas May Varuna with guidance straight, And Mitra the One-who-knows, And Aryaman in accord with Aditya, Guide us forth, like the wind that blows,As with their Might Evermore They guard the Sacred Laws, Shelter may they vouchsafe to us, Immortal Gods to mortal men.. The Vedic Seers of ancient India knew that mere words could not capture the essence of the Supreme Reality. However, they did not give up trying, and shared their visions as hymns dedicated to the various sentient beings guarding the natural and supernatural phenomena around them. These guardians of the Three Lokas were referred to as Devas (Sanskrit root 'Div' meaning the 'Shining One'). The effulgent Devas The derived term 'Deus' or 'Dios' from the same root, is still used to refer to God in modern European languages and even in the New Testament of Bible. The Brihadaranyaka Upanishad in fact has a clear discussion between a rishi Vidagdha and the foremost authority of those times Rishi Yagnavalkya. The 33 Gods Indra with the Vasus

Jewish mythology Jewish mythology is the sacred and traditional narratives that help explain and symbolize Judaism. Elements of Jewish mythology have had a profound influence on Christian and Islamic mythology, as well as world culture in general. Christian mythology directly inherited many of the narratives from the Jewish people, sharing in common the narratives from the Old Testament. Islamic mythology also shares many of the same stories; for instance, a creation account spaced out over six periods, the legend of Abraham, the stories of Moses and the Israelites, and many more. Tanakh[edit] Jewish mythology contains similarities to the myths of other Middle Eastern cultures. The Biblical prophets, including Isaiah, Ezekiel, and Jeremiah, had a concept of the divine that differed significantly from that of the nature religions. "the sun, moon, stars, sky and earth are not gods in their own right, hostile to Yahweh. Zoroastrian influence[edit] R. Linear history[edit] Genesis creation narrative[edit]

Buddhist mythology Wrathful deities[edit] One notable feature of Tibetan Buddhism and other Vajrayana traditions in particular is the use of Wrathful deities.[2] While the deities have a hideous and ferocious appearance,[3] they are not personifications of evil or demonic forces.[2] The ferocious appearance of these deities is used to instill fear in evil spirits which threaten the Dharma.[3] Wrathful deities are used in worship and devotion[2] with the practice dating to the 8th century[2] having been instituted by Padmasambhava.[2] The origin of these deities comes from mythology in Hinduism, Bon, or other folk deities.[2] Yaksha[edit] The Yaksha are a broad class of nature-spirits, usually benevolent, who are caretakers of the natural treasures hidden in the earth and tree roots.[4] Having been worshiped in India since before the Vedic period,[5] their worship was adopted by both Buddhism and Jainism.[5] Yidam[edit] The Yidam, or Ishta-devata, is a personal meditation deity. Hells[edit] Heavens[edit]