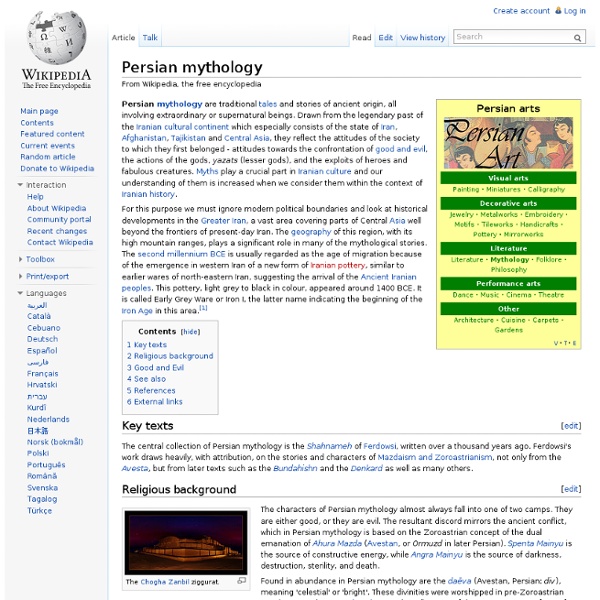 Persian mythology are traditional tales and stories of ancient origin, all involving extraordinary or supernatural beings. Drawn from the legendary past of Iran, they reflect the attitudes of the society to which they first belonged - attitudes towards the confrontation of good and evil, the actions of the gods, yazats (lesser gods), and the exploits of heroes and fabulous creatures. Myths play a crucial part in Iranian culture and our understanding of them is increased when we consider them within the context of Iranian history. For this purpose we must ignore modern political boundaries and look at historical developments in the Greater Iran, a vast area covering parts of Central Asia well beyond the frontiers of present-day Iran. The geography of this region, with its high mountain ranges, plays a significant role in many of the mythological stories. Key texts[edit] The central collection of Persian mythology is the Shahnameh of Ferdowsi, written over a thousand years ago.

Armenian mythology Armenian mythology was strongly influenced by Zoroastrianism, with deities such as Aramazd, Mihr or Anahit, as well as Assyrian traditions, such as Barsamin, but there are fragmentary traces of native traditions, such as Hayk or Vahagn and Astghik. According to De Morgan there are signs which indicate that the Armenians were initially nature worshipers and that this faith in time was transformed to the worship of national gods, of which many were the equivalents of the gods in the Roman, Persian and Greek cultures. Georg Brandes described the Armenian gods in his book: “When Armenia accepted Christianity, it was not only the temples which were destroyed, but also the songs and poems about the old gods and heroes that the people sang. We have only rare segments of these songs and poems, segments which bear witness of a great spiritual wealth and the power of creation of this people and these alone are sufficient reason enough for recreating the temples of the old Armenian gods. Totemism

Kurdish mythology Kurdish mythology is the collective term for the beliefs and practices of the culturally, ethnically or linguistically related group of ancient peoples who inhabited the Kurdistan mountains of northwestern Zagros near northern Mesopotamia. In Kurdish mythology, Kurds are descended of people who fled to the mountains to save their lives from the oppression of a king named Zahhak. It is believed that the people, like Kaveh the Blacksmith who fled and hid in the mountains over the course of history created a Kurdish ethnicity. (Bulloch and Morris. p50) Mountains, to this day, are still important geographical and symbolic figures in Kurdish life. References[edit] See also[edit] Iranian mythology

Canaanite religion Canaanite religion is the name for the group of Ancient Semitic religions practiced by the Canaanites living in the ancient Levant from at least the early Bronze Age through the first centuries of the Common Era. Canaanite religion was polytheistic, and in some cases monolatristic. Beliefs[edit] Pantheon[edit] Ba'al with raised arm, 14th-12th century BC, found at Ras Shamra (ancient Ugarit), Louvre A great number of deities were worshiped by the followers of the Canaanite religion; this is a partial listing: Afterlife; Cult of the Dead[edit] Cosmology[edit] So far, none of the inscribed tablets found in 1929 in the Canaanite city of Ugarit (destroyed ca. 1200 BC) has revealed a cosmology. From the union of El Elyon and his consort were born Uranus (Pronounced Oo(as in room)-ran-aws) and Ge (Pronounced Yee), Greek names for the "Heaven" and the "Earth". Mythology[edit] History[edit] The Canaanites[edit] Some[who?] Influences[edit] Contact with other areas[edit] Hebrew Bible[edit] Sources[edit]

Islamic mythology Islamic mythology is the body of traditional narratives associated with Islam from a mythographical perspective. Many Muslims regard these narratives as historical and sacred and believe they contain profound truths. These traditional narratives include, but are not limited to, the stories contained in the Qur'an. Followers of Islam (Muslims) believe that Islam, in its current form, was established by God, through the prophet Muhammed, who lived in the 6th and 7th centuries CE.[1] Muslims believe that all true prophets (including Musa and Isa) preached Islamic principles that were applicable in their time but when the times changed and people needed new guidance for new situations, God appointed a new prophet with a new code of life that could guide them. Central Islam stories[edit] Life of Muhammad[edit] The Kaaba[edit] According to Islamic tradition, God instructed Adam to construct a building to be the earthly counterpart of the House of Heaven. Biblical stories in the Qur'an[edit]

Hittite mythology Seated deity, late Hittite Empire (13th century BC) The understanding of Hittite mythology depends on readings of surviving stone carvings, deciphering of the iconology represented in seal stones, interpreting ground plans of temples: additionally, there are a few images of deities, for the Hittites often worshipped their gods through Huwasi stones, which represented deities and were treated as sacred objects. Gods were often depicted standing on the backs of their respective beasts, or may have been identifiable in their animal form.[3] Overview[edit] Priests and cult sites[edit] The liminal figure mediating between the intimately connected worlds of gods and mankind was the king and priest; in a ritual dating from the Hittite Old Kingdom period: The gods, the Sun-God and the Storm-God, have entrusted to me, the king, the land and my household, so that I, the king, should protect my land and my household, for myself.[5] Deities and their myths[edit] List of Hittite deities[15][edit]

Ancient Mesopotamian religion The god Marduk and his dragon Mušḫuššu Mesopotamian religion refers to the religious beliefs and practices followed by the Sumerian and East Semitic Akkadian, Assyrian, Babylonian and later migrant Arameans and Chaldeans, living in Mesopotamia (a region encompassing modern Iraq, Kuwait, southeast Turkey and northeast Syria) that dominated the region for a period of 4200 years from the fourth millennium BCE throughout Mesopotamia to approximately the 10th century CE in Assyria.[1] Mesopotamian polytheism was the only religion in ancient Mesopotamia for thousands of years before entering a period of gradual decline beginning between the 1st and 3rd centuries CE. Reconstruction[edit] As with most dead religions, many aspects of the common practices and intricacies of the doctrine have been lost and forgotten over time. History[edit] Overview map of ancient Mesopotamia. Akkadian names first appear in king lists of these states circa 2800 BCE. Religion in the Neo-Assyrian Empire[edit] "Enlil!

Ossetian mythology The mythology of the Ossetian people of the Caucasus region contains several gods and supernatural beings. The religion itself is believed to be of Sarmatian origin, but contains many later elements from Christianity, and the Ossetian gods are often identified with Christian saints. The gods play a role in the famous stories about a race of semi-divine heroes called the Narts. The uac- prefix in Uastyrdzhi and Uacilla has no synchronic meaning in Ossetic, and is usually understood to mean "saint" (also applied to Tutyr, Uac Tutyr, perhaps Saint Theodore, and to Saint Nicholas, Uac Nikkola). Kurys (Digor Burku) is a dream land, a meadow belonging to the dead, which can be visited by some people in their sleep. See also[edit] References[edit] Jump up ^ Arys-Djanaïeva p.163Jump up ^ Arys-Djanaïeva p.163Jump up ^ Lurker, Manfred (1987), The Routledge Dictionary of Gods and Goddesses, Devils and Demons, Routledge, p. 30, ISBN 0-415-34018-7 Jump up ^ Arys-Djanaïeva p.165 Sources[edit]

Rigvedic deities In the Rigveda it is stated that there are 33 deities associated with sky (dyu), earth (prithvi) and the middle realm (antariksha), though a larger number of deities are mentioned in the text.[1] There are 1028 hymns in the Rigveda, most of them dedicated to specific deities. Invoked in groups are the Vishvedevas (the "all-gods"), the Maruts, violent storm gods in Indra's train and the Ashvins, the twin horsemen. Rivers play an important role, deified as goddesses, most prominently the Sapta Sindhu and the Sarasvati River. Yama is the first ancestor, also worshipped as a deity, and the god of the underworld and death. Vishnu and Rudra, the prominent deities of later Hinduism (Rudra being an early form of Shiva) are present as marginal gods. The names of Indra, Mitra, Varuna and the Nasatyas are also attested in a Mitanni treaty, suggesting that the some of the religion of the Mitannis was very close to that of the Rigveda. Deities by prominence[edit] See also[edit] Historical Vedic religion