US versus Manning, Assange, WikiLeaks, and the Press, the Time Line 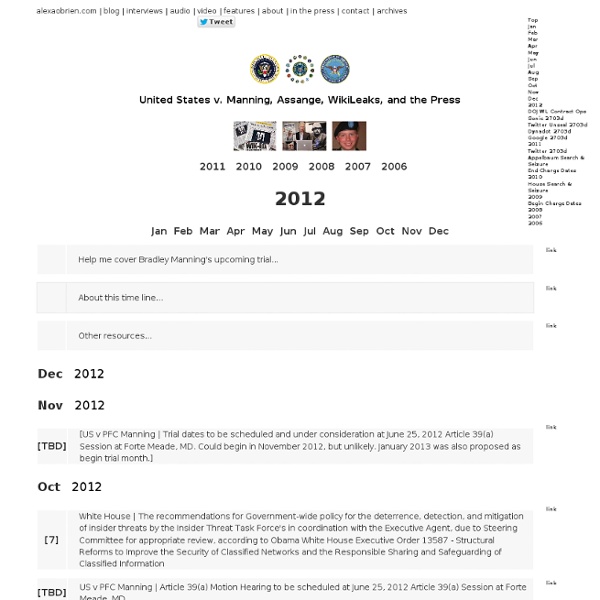 Populating content today. Populating content today... This is a transcript of the Motion Hearing held on June 6, 2012 at Fort Meade, Maryland in US v Pfc. Bradley Manning. Judge: Army Col. 09:00 a.m. 10:00 a.m. Judge Lind Called to order. Lind goes through the script of reading Pfc. [Military counsel] is provided at no expense to you. If you are represented by military counsel of your own selection, then your detailed military counsel will be excused. Do you understand that? Bradley Manning Yes, your Honor. So the documents that Mr. In addition to military defense counsel you have the right to be represented by civilian counsel at no expense to the Government. Civilian counsel may represent you with military defense counsel or you can excuse your military counsel and be represented only by your civilian counsel. Do you understand your....? Yes, Ma'am. OK so at this point you have a detailed military defense counsel. Are these the three attorneys that you want to represent you [Mr. OK. OK. 1.) Related:  US of A vs. Private Chelsea Manning

Bradley Manning, the NDAA and Wikileaks Alexa O’Brien is a journalist, researcher, and social activist. She is currently investigating the Bradley Manning trial and the US government’s pursuit of Wikileaks. JAMES GREEN: Could you start off by telling me about the work you’re doing right now on the Bradley Manning case? ALEXA O`BRIEN: Sure. And then there is more in-depth coverage and profiles I’ve built, including witness profiles and a reconstructed Appellate List available at GREEN: Just for people who are not familiar with the legal jargon, what is that? O’BRIEN: It`s basically the court docket. GREEN: What is the justification given for it being done in such secrecy? O’BRIEN: It is a military trial, but it doesn’t matter. GREEN: Where exactly are these trials taking place? O’BRIEN: To give you a kind of high overview, US v. GREEN: What is the General Convening Authority? GREEN: So are there no other professional journalists in attendance at these proceedings? O’BRIEN: Yes.

Bradley Manning's treatment was cruel and inhuman, UN torture chief rules | World news The UN special rapporteur on torture has formally accused the US government of cruel, inhuman and degrading treatment towards Bradley Manning, the US soldier who was held in solitary confinement for almost a year on suspicion of being the WikiLeaks source. Juan Mendez has completed a 14-month investigation into the treatment of Manning since the soldier's arrest at a US military base in May 2010. He concludes that the US military was at least culpable of cruel and inhumane treatment in keeping Manning locked up alone for 23 hours a day over an 11-month period in conditions that he also found might have constituted torture. "The special rapporteur concludes that imposing seriously punitive conditions of detention on someone who has not been found guilty of any crime is a violation of his right to physical and psychological integrity as well as of his presumption of innocence," Mendez writes. But the Pentagon's arguments did not impress the special rapporteur.

Bradley Manning Pretrial Hearing Puts Military On Trial In WikiLeaks Case Bradley Manning is finally getting his day in court. The Army private accused of giving thousands of classified documents to WikiLeaks took the witness stand on Thursday and Friday in a pretrial hearing. Manning and his defense lawyer are in essence putting the military on trial, arguing that Manning's treatment in the Marine Corps brig at Quantico was so harsh that his court martial charges should be dropped. Manning, 24, speaking in public in court Thursday at Fort Meade in Maryland for the first time since he was accused in May 2010 of leaking thousands of military and diplomatic documents to the website, detailed some of the 917 days he had spent in custody. He endured many of them in solitary confinement for 23 hours a day, stripped naked at night on suicide watch -- conditions that the United Nations' special rapporteur on torture found to be "cruel and unusual." On Friday, military prosecutors sought to challenge that argument. But it did not work. Also on HuffPost:

Congressional committee holds hearing on national security leak prevention and punishment Recent leaks of classified information prompted concerned members of the Congressional House Judiciary Committee to hold a hearing today to address consequences for those involved in releasing and publishing national secrets. The Subcommittee on Crime, Terrorism, and Homeland Security, among other things, listened to testimony about the effectiveness of the Espionage Act of 1917. Recently published investigative news articles in notable newspapers including The New York Times and The Washington Post on cyber warfare, drone strikes and other classified information have brought the issue of leaks to national attention. At the packed hearing, several committee members presented the idea of targeting journalists who knowingly publish leaked information. Members raised questions about the intent of newspapers that print such material and whether journalists should be subpoenaed to testify about their sources. "Why not send a subpoena to the reporter? Attorney Kenneth L. Rep. Rep.

Turning Their Back on Bradley Manning As the alleged source of many of the most vital WikiLeaks reports of the past several years, U.S. Army Private Bradley Manning shed considerable light on how the United States has prosecuted the Iraq and Afghan wars. Other State Department cables reportedly leaked by Manning conveyed vital information about U.S. foreign policy. Manning has, in other words, been connected to a lot of news (FAIR Media Advisories, 4/7/10, 12/16/10, 7/30/10): the video of a 2007 U.S. helicopter attack in Baghdad that killed several civilians (two Reuters journalists died in the attack); the revelation that hundreds of U.S. attacks on civilians in Afghanistan had been recorded by the military--but were unreported elsewhere; the cache of diplomatic cables that uncovered U.S. efforts to stymie legal investigations into torture, U.S. involvement in airstrikes in Yemen; and much more. Last week, the military trial at Fort Meade centered on the question of whether these pre-trial conditions were unlawful.

CIA launches task force to assess impact of U.S. cables' exposure by WikiLeaks Officially, the panel is called the WikiLeaks Task Force. But at CIA headquarters, it's mainly known by its all-too-apt acronym: W.T.F. The irreverence is perhaps understandable for an agency that has been relatively unscathed by WikiLeaks. Even so, CIA officials said the agency is conducting an extensive inventory of the classified information, which is routinely distributed on a dozen or more networks that connect agency employees around the world. And the task force is focused on the immediate impact of the most recently released files. "The director asked the task force to examine whether the latest release of WikiLeaks documents might affect the agency's foreign relationships or operations," CIA spokesman George Little said. Even while moving to share more information over the past decade, the agency "has not capitulated to this business of making everything available to outsiders," said a former high-ranking CIA official who recently retired.

The Trials of Bradley Manning Pfc. Bradley Manning was finally allowed to speak publicly, in his own defense, in a preliminary hearing of his court-martial. Manning is the alleged source of the largest intelligence leak in U.S. history. As he now faces 22 counts in a court martial that could land him in prison for the rest of his life, his lawyer argued in court that the case should be thrown out, based on his unlawful pretrial punishment. Veteran constitutional attorney Michael Ratner was in the courtroom at Fort Meade, Md., that day Manning took the stand. Ratner said Manning described being kept in a cage in Kuwait: “There were two cages. After Kuwait, Manning was shipped to a brig in Quantico. Manning’s cruel treatment was described by officials as necessary, as he was a suicide risk. This first phase of the court-martial, which Coombs calls “the unlawful pretrial punishment motion phase,” considered a defense motion to throw out the entire case. © 2011 Amy Goodman Distributed by King Features Syndicate

Cable Viewer Wikileaks began on Sunday November 28th 2010 publishing 251,287 leaked United States embassy cables, the largest set of confidential documents ever to be released into the public domain. The documents will give people around the world an unprecedented insight into US Government foreign activities. The cables, which date from 1966 up until the end of February 2010, contain confidential communications between 274 embassies in countries throughout the world and the State Department in Washington DC. 15,652 of the cables are classified Secret. The embassy cables will be released in stages over the next year. The subject matter of these cables is of such importance, and the geographical spread so broad, that to do otherwise would not do this material justice. Every American schoolchild is taught that George Washington – the country’s first President – could not tell a lie. Groups to contact for comment How to explore the data Pick out interesting events and tell others about them. Key figures:

Related:
Related:  US of A vs. Private Chelsea Manning