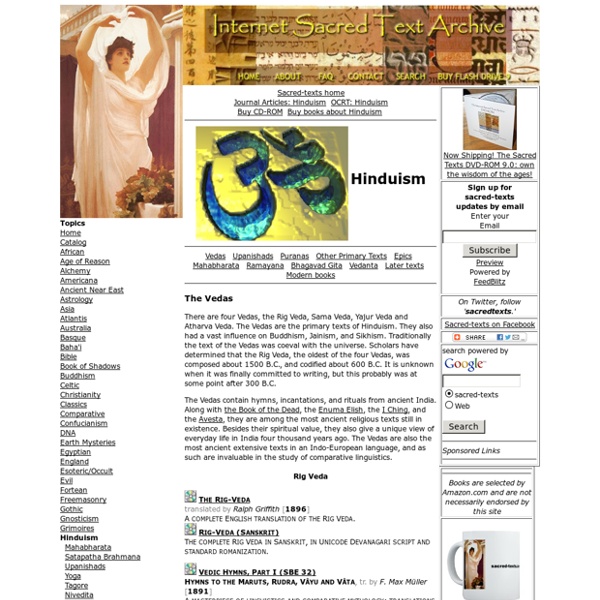 பன்னிரு திருமுறை பாட்டும் பொருளும் Mahabharata: complete synopsis and notes The Mahabharata (composed between 300 BC and 300 AD) has the honor of being the longest epic in world literature, 100,000 2-line stanzas (although the most recent critical edition edits this down to about 88,000), making it eight times as long as Homer's Iliad and Odyssey together, and over 3 times as long as the Bible (Chaitanya vii). According to the Narasimhan version, only about 4000 lines relate to the main story; the rest contain additional myths and teachings. In other words, the Mahabharata resembles a long journey with many side roads and detours. The name means “great [story of the] Bharatas.” The work is divided into 18 books (concerning an 18-day war among 18 armies). Pronunciation guide of the main characters: Vyasa [Vee-YA-sha]: narrator of the story and father of Pandu and Dhritarashtra BHISH-ma: half-uncle by marriage of Pandu and Dhritarashtra Dhri-ta-RASH-tra: blind king, father of Duryodhana and the Kauravas GAN-dhari: wife of Dhritarashtra AR-juna: mightiest of warriors

When Does the Kali Yuga End? In Hindu mythology, Kalki is the final incarnation of Vishnu, foretold to appear at the end of Kali Yuga, our current epoch. The Puranas foretell that he will be atop a white horse with a drawn blazing sword. He is the harbinger of the end time in Hindu eschatology, after which he will usher in the Satya (Krita) Yuga. By JOSCELYN GODWIN The widespread belief that an age is ending and a new one dawning is part of a cyclical concept of time common to most philosophical cultures. The earliest European source of the myth is Hesiod, a Greek poet of the eighth century BCE. Post-classical culture learned of the Four Ages mainly through Virgil and Ovid. Now comes the last age, sung by the Cumaean Sibyl: The great order of ages starts anew. The Abrahamic religions (Judaism, Christianity, Islam) do not share the pagan concept of multiple cycles of creation and destruction. The Four Ages (Yugas) of Hinduism 800 fighters going through each of 540 doors totals 432,000. Footnotes 1. 2. 3. 4. 5. 6. 7.

What Daily Meditation Can Do for Your Creativity :: Tips :: The If you depend on your creativity for your living, then your most valuable piece of equipment is not your computer, smartphone, camera, or any other hi-tech gadget. “In a modern company 70 to 80 percent of what people do is now done by way of their intellects. The critical means of production is small, gray, and weighs around 1.3 kilograms. It is the human brain.”*So what are you doing to maintain this precious resource? But I’m not talking about stimulation, quite the reverse. What works for me is daily meditation. Qualities such as focus, calmness, clarity, and insight are as important to your creative process as glamour and stimulation. I received my initial instruction in meditation from Buddhist monks. The Benefits of Meditation Practice for Creatives It’s important to note that there’s a lot more to meditation practice than simply “boosting your creativity.” Focus. Patience. Calmness. Clarity. Insight. Perspective. Getting Started How About You?

Thirumurai - பன்னிரண்டு திருமுறைகள் - Thirumanthiram Spirituality & the Tamil Nation The Twelve Thirumuraiபன்னிரண்டு திருமுறைகள் [to read the Tamil text you may need to download & install a Tamil Unicode font from here - for detailed instructions please also see Tamil Fonts & Software] "The following works of art and literature are among the most remarkable contributions of the Tamil creative of the Tamil creative genius to the world's cultural treasure and should be familiar to the whole world and admired and beloved by all in the same way as the poems of Homer, the dramas of Shakespeare, the pictures of Rembrandt, the cathedrals of France and the sculptures of Greece:....The school of Bhakti ... Saiva, which is one of those most sincere and passionate efforts of man to grasp the Absolute; and its supreme literary expression in the works of Manikkavasagar, Tirugnana Sambandar.... The philosophical system of Saiva Sidhdhantha, a system, which may be ranked among the most perfect and cleverest systems of human thought.." Formless Supreme

ATLANTEAN GARDENS: History of the Medes: Magi and Enchanters of Old The Medes were a people of Indo-Iranian (Aryan) origin who inhabited the western and north-western portion of present-day Iran. By the 6th century BC (prior to the Persian invasion) the Medes were able to establish an empire that stretched from Aran (the modern-day Republic of Azerbaijan) to Central Asia and Afghanistan. Today's population of the western part of the Iranian Plateau (including many Persian-speakers, Kurds and Azeris) consider themselves to be descended from the ancient Medes. Apart from a few personal names, the original Aryan language of the Medes is almost entirely unknown. It was most likely similar to the Avestan and Scythian languages (proto-Indo-European/Iranian) The Six Median Tribes Herodotus lists the names of six Mede tribes or castes. The Busae group is thought to derive from the Persian term buza meaning indigenous (i.e. not Iranian). Josephus relates the Medes (OT Heb. Thus were the Medes subjected to their close kin, the Persians.

25 Thoughtful Quotes From Carl Jung Carl Jung was a Swiss psychiatrist, an influential thinker and is renowned as the founder of analytical psychology. Although he was a theoretical psychologist and practicing clinician, much of his life’s work was spent exploring other areas, including Eastern and Western philosophy, alchemy, astrology, sociology, as well as literature and the arts. His most notable ideas include the concept of psychological archetypes, the collective unconscious and synchronicity. Jung is the source of some of my all time favorite quotes. I admire how he mixes logical thinking along with a grain of spirituality and the subconscious realms. Every form of addiction is bad, no matter whether the narcotic be alcohol, morphine or idealism. Everything that irritates us about others can lead us to a better understanding of ourselves. Nobody, as long as he moves about among the chaotic currents of life, is without trouble. A man who has not passed through the inferno of his passions has never overcome them.