Choice page. Bali hopes to regain paradise island status with mass cleanup. Overwhelmed by tides of waste and decades of mass tourism, to some, the Indonesian island of Bali is a paradise long lost. 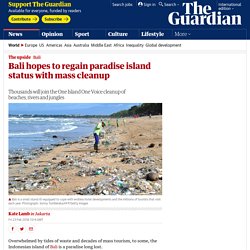 Whether emblazoned with flashing lights or alpine motifs, 12m jumpers are set to be snapped up this year, despite 65m already languishing in UK wardrobes. Diving to save Indonesia's coral reefs from plastic. News BBC News Navigation Sections Media player. 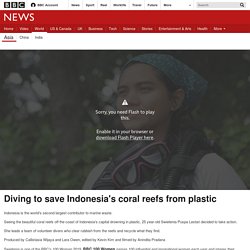 How plastic bags were supposed to help save the planet. Microplastics: Seeking the 'plastic score' of the food on our plates. Image copyright Getty Images Microplastics are found everywhere on Earth, yet we know surprisingly little about what risks they pose to living things. 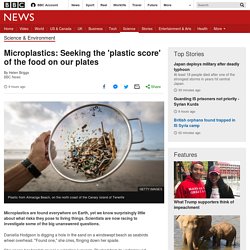 Scientists are now racing to investigate some of the big unanswered questions. Daniella Hodgson is digging a hole in the sand on a windswept beach as seabirds wheel overhead. "Found one," she cries, flinging down her spade. She opens her hand to reveal a wriggling lugworm. A sentinel for plastic, the worm will ingest any particles of plastic it comes across while swallowing sand, which can then pass up the food chain to birds and fish. Tires: The plastic polluter you never thought about. In 2014 biologist John Weinstein and his graduate students went looking for microplastics—the small bits of degraded plastic that researchers have discovered are spread throughout the environment. 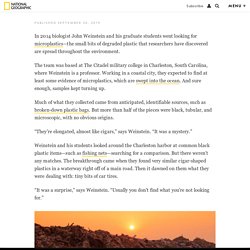 The team was based at The Citadel military college in Charleston, South Carolina, where Weinstein is a professor. Working in a coastal city, they expected to find at least some evidence of microplastics, which are swept into the ocean. And sure enough, samples kept turning up. Much of what they collected came from anticipated, identifiable sources, such as broken-down plastic bags. Made-in-Taiwan Biodegradable Plastic, Delivering Big for Starbucks and Apple｜Industry｜2019-07-11｜web only. When CommonWealth Magazine first meets Minima Technology Chairman Huang Chien-ming at his company’s headquarters in Taichung, he is holding a plastic bag with the image of a green turtle drinking bubble tea and has several green biodegradable plastic straws for Starbucks sticking out of his shirt pocket. 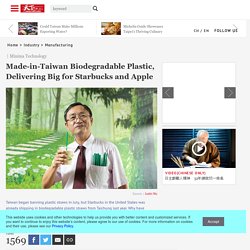 The inconspicuous corrugated steel structure in which he stands conceals the hardships of developing biodegradable plastics in Taiwan over the past 21 years. That hardship finally bore fruit in April 2018 when Starbucks in the United States contacted the company. It was just three months before Seattle was about to become the first city in the world to ban non-biodegradable straws. After Starbucks confirmed that Minima’s biodegradable products had received U.S. and international certification, it had the company air freight a large order of the straws from Taichung to Seattle, fully aware that it would be paying mostly to transport air.

An Eco-friendly Production Model. Wimbledon ditches plastic racket covers in sustainability drive. Alarm as study shows how microplastics are blown across the world   Microplastic is raining down on even remote mountaintops, a new study has revealed, with winds having the capacity to carry the pollution “anywhere and everywhere”. 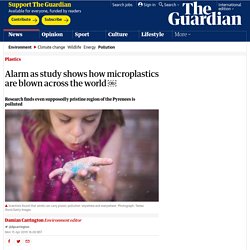 The scientists were astounded by the quantities of microplastic falling from the sky in a supposedly pristine place such as the French stretch of the Pyrenees mountains. Researchers are now finding microplastics everywhere they look; in rivers, the deepest oceans and soils around the world. Other recent studies have found microplastics in farmland soils near Shanghai, China, in the Galápagos Islands, a Unesco world heritage site, and in rivers in the Czech Republic. Humans and other animals are known to consume the tiny plastic particles via food and water, but the potential health effects on people and ecosystems are as yet unknown. 5 unexpected solutions to the plastic crisis. Why We Should Stop Throwing Away Coffee Cups [Infographic] Like many people, your morning commute features that stop for your daily java jolt. 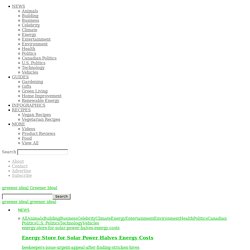 You go through the drive-through or wait to hear your name called in the café for that tall, venti or grande coffee with a double shot of whatever it is you fancy. And once your cup is empty, it’s tossed in the trash until you can get your fix again with a new cup. With 54% of people drinking coffee daily, unfortunately, those cups are stacking up. Less than one in 400 cups are recycled, and the rest spend about 20 years in a landfill before they decompose.

The good news is there are many other options available. From paper cup to mug and everything in between, this infographic breaks down the pros and cons of each option. It also offers a variety of fun facts about coffee, including the different types of beans, their origins, and the various unique flavors available. The plastics crisis is more urgent than you know. Recycling bottles won’t fix it. West Wales, last weekend. 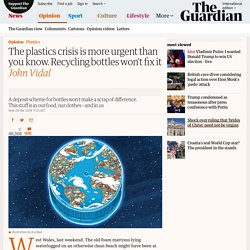 The old foam mattress lying waterlogged on an otherwise clean beach might have been at sea for months before it was washed up on the tide. The plastics crisis is more urgent than you know. Recycling bottles won’t fix it. Plastic recycling: Why are 99.75% of coffee cups not recycled? Image copyright Getty Images It's gradually becoming common knowledge that it's not as easy to recycle your takeaway coffee cup as people may have thought. 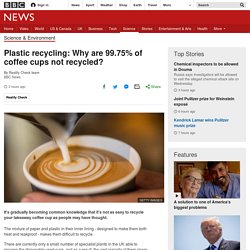 The mixture of paper and plastic in their inner lining - designed to make them both heat and leakproof - makes them difficult to recycle. There are currently only a small number of specialist plants in the UK able to process the disposable used cups, and as a result, the vast majority of them (more than 99.75%) don't get recycled.

In 2011 it was estimated that 2.5 billion coffee cups were thrown away each year and that figure is likely to be higher now. Some of the biggest sellers of coffee in the UK, including Costa and Starbucks, say they have started recycling coffee cups, but that's only if customers dispose of their takeaway cups in store. Ace UK, the representative body for beverage carton manufacturers, has 382 recycling points for coffee cups and other paper products across the UK. Recycled packaging 'may end up in landfill', warns watchdog. Image copyright Getty Images You try to be virtuous, wiping the curdling yoghurt off a plastic pot, then putting it in the recycling bin.

Perhaps you envisage the pot eventually re-incarnated as a frisbee or maybe even a plastic bench. But don’t rest easy. Your pot might get burned or buried in landfill, and you’d never know. The National Audit Office (NAO) says over half of the packaging reported as recycled is actually being sent abroad to be processed. As a result, it says, the government has little idea of whether the recyclables are getting turned into new products, buried in landfill or burned. Map reveals 'scourge' of Scotland's coastal litter problem. Image copyright ScRAPBook/UKCAP A map identifying litter hotspots along Scotland's coastline is being launched.

How plastic waste has been turned into benches. Plastics Watch - Plastics Action. The plastic smokers leave behind.