SEA LIONS have external ears, long front flippers, and can walk on all fours on land. SEALS, on the other hand, have short, clawed flippers and are very clumsy out of the water. Sea lions tend to stay close to the shore whereas seals can be found far out to sea.

The largest seal is the Elephant Seal, who tips the scales at 6,600 lbs. WALRUS weigh in at two tons, with tusks growing over 3ft long. Fur Seal and Beluga Whale. Hoover, the talking seal. Hoover (1971? 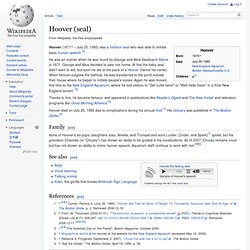 – July 25, 1985) was a harbour seal who was able to imitate basic human speech.[2] He was an orphan when he was found by George and Alice Swallow in Maine in 1971. George and Alice decided to take him home. At first the baby seal didn't want to eat, but soon he ate at the pace of a Hoover (hence his name). When Hoover outgrew the bathtub, he was transferred to the pond outside their house where he began to imitate people's voices. Thanks to this, he became famous, and appeared in publications like Reader's Digest and The New Yorker and television programs like Good Morning America.[4] California Harbor seal in a kelp forest at Cortes bank, CA (Kyle McBurnie) Mitik, The Orphaned Baby Walrus.

Earlier this year, fisherman off the coast of Alaska rescued an orphaned baby walrus. 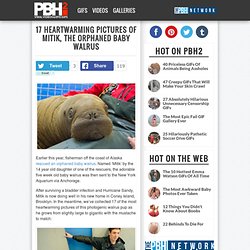 Named ‘Mitik’ by the 14 year old daughter of one of the rescuers, the adorable five week old baby walrus was then sent to the New York Aquarium via Anchorage. After surviving a bladder infection and Hurricane Sandy, Mitik is now doing well in his new home in Coney Island, Brooklyn. In the meantime, we’ve collected 17 of the most heartwarming pictures of this photogenic walrus pup as he grows from slightly large to gigantic with the mustache to match: Silly Sea lion ready for his close up! Random photo Submit your photo Stumble Thru animal photography Tags: close-up sea lion underwater Download sea lion close-up. Face-Off With Leopard Seal. Juvenille Elephant Seal. Divers meet extremely playful wild seals. Wanna play? 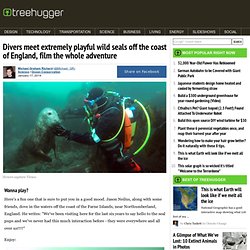 Here's a fun one that is sure to put you in a good mood. Jason Neilus, along with some friends, dove in the waters off the coast of the Farne Islands, near Northumberland, England. He writes: "We've been visiting here for the last six years to say hello to the seal pups and we've never had this much interaction before - they were everywhere and all over us!!!! " Enjoy: I guess they literally had these seals' seal of approval! Reddit/Screen capture Vimeo/Screen capture Via Vimeo, BoingBoing See also: The exquisitely beautiful view from the ISS at night: Our planet like you've never seen it before! Goliath the elephant seal and his keeper at Vincennes Zoo, Paris (1936) Surfing’s Got This Little Guy’s Seal of Approval.

Sea Lions Frolicking. Seal meets girl. Seal falls in love with girl. The end. on Vimeo - StumbleUpon. Walruses Found Using Birds as Toys for First Time. What do you get the walrus that has everything? 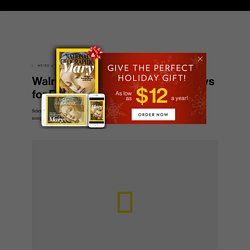 Don’t waste your money on Furbys and Tickle Me Elmos. According to a new study, what walruses really want to play with are bird carcasses. It may surprise you to learn that walruses are playful creatures—and you wouldn’t be alone. Compared with more jovial sea lions and seals, even scientists have long thought of the 1.5-ton walrus as the most humorless pinniped. But according to study co-author Andrey Giljov, a zoologist at St. That's why Giljov and his fellow zoologist Karina Karenina spent a month in 2015 observing a huge group of walruses on Kolyuchin Island (map) in the Chukchi Sea near Russia.

In the end, the toil was worth it. "The reasons why young walruses engage in such behavior are probably the same reasons why all animals begin to play,” says Giljov, whose study appeared recently in the journal acta ethologica. Any Bird Will Do Researchers have known for some time that young male walruses play-fight on the beach. Walrus Mom and Baby Cuddle. Sea lion (Ontariidae) & Seal (Phocidae)