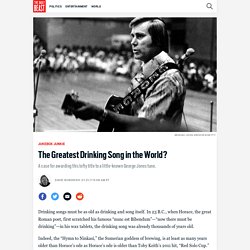 Drinking songs must be as old as drinking and song itself. In 23 B.C., when Horace, the great Roman poet, first scratched his famous “nunc est Bibendum”—“now there must be drinking”—in his wax tablets, the drinking song was already thousands of years old. Indeed, the “Hymn to Ninkasi,” the Sumerian goddess of brewing, is at least as many years older than Horace’s ode as Horace’s ode is older than Toby Keith’s 2011 hit, “Red Solo Cup.”

(And really, Toby, playing the Trump inaugural? I thought you were better than that. Deep down, these songs all generally fall into two categories. Then there’s the other kind. As much as I love the music in the Bacchic/Dionysian tradition for its freedom, its rowdiness, and its fun, I have to admit most of my favorite drinking songs fall into this second category. So, given the impossible task of choosing the world’s greatest drinking song, it’s here I’m going to look. Sara Evans - Suds In The Bucket. Nora Jane Struthers, 'The Same Road' : The Record. Nora Jane Struthers is guided by fire. 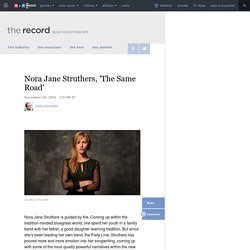 Coming up within the tradition-minded bluegrass world, she spent her youth in a family band with her father, a good daughter learning tradition. But since she's been leading her own band, the Party Line, Struthers has poured more and more emotion into her songwriting, coming up with some of the most quietly powerful narratives within the new wave of Americana artists. She challenged the legacy of the murder ballad by giving voice to one of its silenced female victims on "Willie," the most memorable track from her 2010 debut album; her song "Two Women," from last year's Carnival, considered the cruelty of slavery from the point of view of both a female slave and the wife of the slave owner who abused her.

Struthers can also write a summery tune or get down with her band on an instrumental jam (they've busked their way across the nation.) YOU'RE THE REASON by HANK WILLIAMS III. Joni Mitchell-Girl of the North Country (Johnny Cash Show) Johnny Cash & Joni Mitchell - The Long Black Veil. 14 amazing country songs for people who hate country. Country music is bland, conservative music for aging white fuddy-duddies. 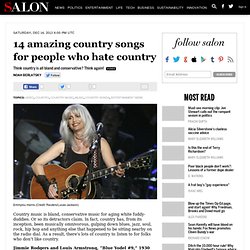 Or so its detractors claim. In fact, country has, from its inception, been musically omnivorous, gulping down blues, jazz, soul, rock, hip hop and anything else that happened to be sitting nearby on the radio dial. As a result, there’s lots of country to listen to for folks who don’t like country. Hillbilly music as a genre was originally constructed in opposition to so-called “race music” — which is to say, it was specifically designed for white people. Segregated marketing has, painfully and shamefully, made country music what it is to no small extent. Western swing was swing band music played by rural white folks with some country instrumentation. Kay Starr was a pop and jazz singer who frequently worked in the country idiom; she recorded a number of excellent duets with Tennessee Ernie Ford.

Bill Monroe, “Scotland,” 1958. Dolly Parton. Porter Wagoner & Dolly Parton - Just Someone I Used To Know. Conway Twitty "Its Only Make Believe" Emmylou Harris : Making Believe (1977) Tulsa Queen, Emmylou Harris. Shel Silverstein on "The Johnny Cash Show" Johnny Cash 1 The Only Mama That'll Walk The Line. Linda Ronstadt & johnny cash i never will marry johnny cash show 1969. Louis Armstrong on "The Johnny Cash Show" - complete and uncut. Carl Perkins & eric clapton - on the Johnny cash Show - Matchbox. Remembering the music of George Jones. Wanda Jackson. HIDDEN ERROR: Usage of "death_cause" is not recognized Wanda Lavonne Jackson (born October 20, 1937) is an American singer, songwriter, pianist and guitarist who had success in the mid-1950s and 1960s as one of the first popular female rockabilly singers and a pioneering rock and roll artist.[2] She is known to many as the "Queen of Rockabilly" (or "First Lady of Rockabilly").[3] Jackson mixed country music with fast-moving rockabilly, often recording them on opposite sides of a record.[4] As rockabilly declined in popularity in the mid-1960s, she moved to a successful career in mainstream country music with a string of hits between 1966 and 1973, including "Tears Will Be the Chaser for Your Wine", "A Woman Lives for Love" and "Fancy Satin Pillows". 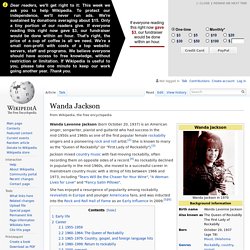 She has enjoyed a resurgence of popularity among rockabilly revivalists in Europe and younger Americana fans, and was inducted into the Rock and Roll Hall of Fame as an Early Influence in 2009.[5][6] Early life[edit] Career[edit] 1955–1959[edit] S Late Night Music Club With Patti Page. BLACKIE AND THE RODEO KINGS and LUCINDA WILLIAMS-I can't have you.