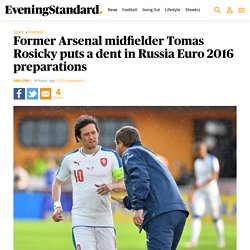 Russia started the game strongly and went ahead in the sixth minute through Aleksandr Kokorin’s strike from the edge of the penalty area. But Rosicky, who spent a decade at the Emirates Stadium before leaving at the end of this season, equalised with a superb 20-yard volley after the break. Tomas Necid hooked in a winner with only a minute remaining to inflict defeat on Leonid Slutsky's side, who face the Three Lions in Marseille on June 11. Russia have now lost their two most recent friendlies, having also been beaten by host nation France courtesy of a 4-1 scoreline last week. Slutsky has left Russia's all-time top scorer Alexander Kerzhakov out of his squad and will also be without injured duo Alan Dzagoev and Yuri Zhirkov this summer. Putin cracks down on use of social media in Russia.

Loaded: 0% Progress: 0% Russian President Vladimir Putin arrives in Greece's monastic community of Mount Athos to celebrate the 1,000th anniversary of the founding of a Russian monastery. 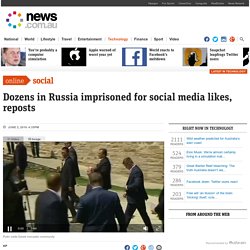 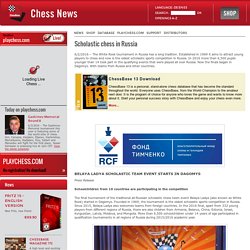 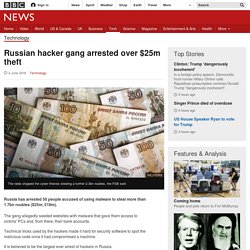 The gang allegedly seeded websites with malware that gave them access to victims' PCs and, from there, their bank accounts. Technical tricks used by the hackers made it hard for security software to spot the malicious code once it had compromised a machine. Bitcoin Technology Can Help Russia Dodge Sanctions: MP. Russian businesses could harness the power of technology developed for cryptocurrency bitcoin to avoid being subject to Western sanctions, a prominent Russian lawmaker claimed. 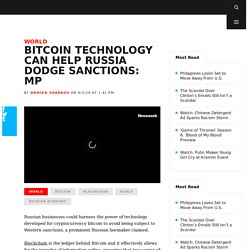 Blockchain is the ledger behind Bitcoin and it effectively allows for the transfer of information online, ensuring that two copies of it were not made. Andrei Lugovoi, member of parliament for Russia’s nationalist LDPR party, now believes blockchain should be used by Russians who want to dodge U.S. and EU sanctions. Several Russian businesses and individuals perceived as close to Russian President Vladimir Putin are under U.S. and EU trade sanctions, as punishment for Putin’s decision to annex Crimea from Ukraine in 2014. Try Newsweek for only $1.25 per week.

Russia Gives France a Puppy to Replace Police Dog Killed in Raid. Photo In a ceremony in Moscow on Monday, Russia presented France with a puppy to replace a police dog killed in the aftermath of the terrorist last month. 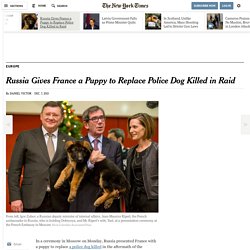 Diesel, a Belgian Malinois, died as members of French special forces raided an apartment in the Paris suburb of St. -Denis on Nov. 18. Three people were killed during the police operation, including Abdelhamid Abaaoud, the Belgian militant suspected of planning the Nov. 13 attacks. As Russia’s Interior Ministry handed over Dobrynya, a German shepherd named after a mythical Russian warrior, Jean-Maurice Ripert, the French ambassador, called it “a gesture that comes from the heart.” Russia's last independent English newspaper ends daily edition. Russia’s only independent English-language newspaper, The Moscow Times, has stopped publishing daily issues in favour of a new weekly format. 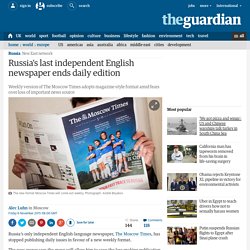 The new owner says the move will allow him to save the loss-making publication, but some correspondents fear it spells the end of an important independent news source and training ground for correspondents. Founded by Dutch publisher Derk Sauer in 1992 and distributed in cafes, hotels and airplanes, The Moscow Times often covered Russian news and issues in more depth than western publications. Former correspondents have gone on to success at other publications, including Pulitzer Prize-winning New York Times correspondent Ellen Barry. Russia Prepares to Exhume Czar Alexander III in Romanov Investigation - History in the Headlines. Premiere today of Hermanis' Brodsky/Baryshnikov / Eng.lsm.lv. Joseph Brodsky, an awardee of the Nobel Prize in Literature, held a friendship with Mikhail Baryshnikov for 22 years, up until the poet's death in 1996. 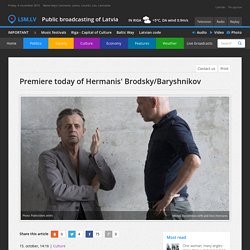 The two will meet again on the stage in a production by Alvis Hermanis. In this theatrical adventure, Baryshnikov will be interpreting Brodsky's poetry. Hermanis and Baryshnikov will lead the viewers into an imaginary landscape of Brodsky's complex, lyrical and punchy play of words. Brodsky/Baryshnikov will reveal the world of the poet in Brodsky's native Russian with text and movement. "This will not be a completely normal theater staging. Mikhail Baryshnikov stressed: "This project is important to us. The scenographer of the play is Kristīne Jurjāne, while Gļebs Fiļštinskis is the lighting designer. Russian universities rise in Times Higher Education rankings. The Lomonosov Moscow State University (MSU) was ranked 161 out of 800 in the Times Higher Education (THE) World University Rankings 2015-16, which were released on October 1st. 13 Russian academic institutions made the list this year, compared to just 2 in the 2014-15 rankings. 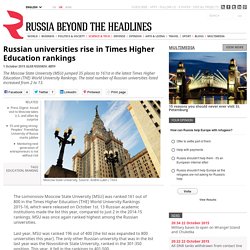 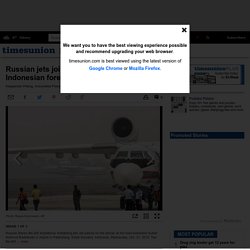 Two Be-200 aircrafts leased by the Indonesian government have arrived on Sumatra island to help douse the massive forest and land fires that have caused widespread haze in parts of Southeast Asia.