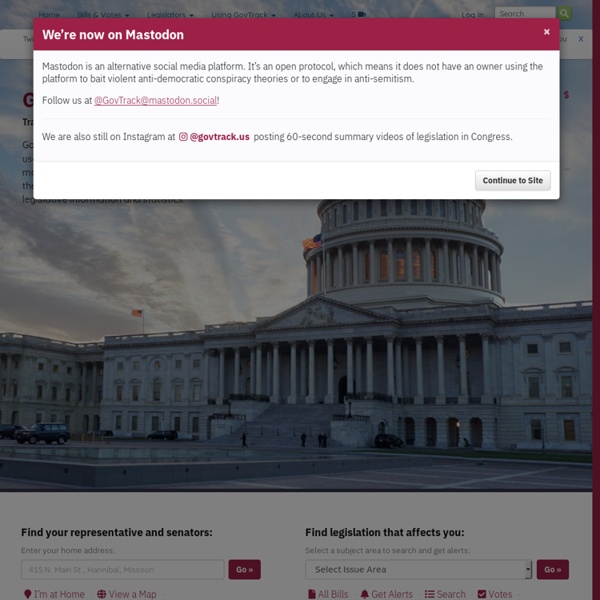 How to Ask Candidates Questions that Make a Difference by Fran Korten Tips for spreading your ideas without getting the runaround. posted Feb 24, 2012 The Occupy movement has changed the political conversation. But will it make a difference in what politicians actually do? We can help—through the questions we ask. 50 Kick-Ass Websites You Need to Know About It's time to update the entries in your browser's links toolbar. But with recent estimates putting the size of the internet at well more than 100 million distinct websites, it's getting harder and harder to get a handle on all the great stuff that's out there. That's why we've compiled this list. Browse USCODE United States Code The United States Code is the codification by subject matter of the general and permanent laws of the United States. It is divided by broad subjects into 51 titles and published by the Office of the Law Revision Counsel of the U.S. House of Representatives. The U.S.

Justifying the Implied Powers of the Federal Government The authors of the U.S. Constitution wanted to replace the weak national government of the Articles of Confederation with a stronger central government. However, they were concerned about giving the new national government too much power. They tried to limit the strength of Congress by specifically listing the powers that Congress could have. The Class-Domination Theory of Power by G. William Domhoff NOTE: WhoRulesAmerica.net is largely based on my book, Who Rules America?, first published in 1967 and now in its 7th edition. This on-line document is presented as a summary of some of the main ideas in that book. Who has predominant power in the United States?

CQ Roll Call Site Will Help Users Contact Legislators There are Web sites that cover the actions and inactions of Congress. And there are Web sites that let voters contact their members of Congress and comment. CQ Roll Call wants to bridge the two. This week, the media company is revamping one of its Web sites, Congress.org, with an eye toward what one of its executives, Peter Anthony, calls “informed action.” “If I’m reading an article on Congress.org about an issue that’s important to me, I can very quickly contact my member of Congress and let them know how I feel about a specific issue,” said Mr.

Ten Anime Series You Should See Before You Die First off I’d just like to say a huge thank you to everyone that read my list of ten anime films you should see before you die—the response has been phenomenal—not just the number of people who read it, but also those who took the time out to get involved in the following discussion. Some people loved my selections, some people thought I was well off the mark, but it was clear that there was no way I was going to be able to avoid putting together another list, this time of TV series. It has been a far harder list to compile. Not only because of the vast selection to choose from, but also because I knew from the start that I would be leaving out some shows that a lot of people hold very dear. As such, I hope that at least some of you will read the next paragraph first before scrolling down the list to see what is missing and getting upset. Cowboy Bebop (1998) - 26 episodes

Checks and Balances - American System of Checks and Balances In the system set up by the U.S. Constitution, the national government is divided into three branches: legislative, executive, and judicial. These three branches are not independent of one another because the Constitution set up a system of checks and balances to help ensure that no one branch became too powerful. Each branch has powers that it can use to check and balance the operations and power of the other two branches. Following is a look at the specific checks that each branch has been given. The American Indian And The "Great Emancipator" By Michael Gaddy Published 01. 9. 03 at 21:31 Sierra Time Perhaps the veneer of lies and historical distortions that surround Abraham Lincoln are beginning to crack. In the movie, "Gangs of New York," we finally have a historically correct representation of the real Abraham Lincoln and his policies. Heretofore, many socialistic intellectuals, politicians and historians have whitewashed these policies in order to protect Lincoln's image because of their allegiance to the unconstitutional centralization of power he brought to our government. The false sainthood and adulation afforded Lincoln has its basis in the incorrect assumption he fought the war to free an enslaved people.