Hunter sales up 19% but investment dents earnings. David Beckham enjoys a day of partridge shooting on pal Guy Ritchie's Wiltshire estate. He's one of England's most famous footballers, who has also enjoyed the distinction of being one of the sports world's few fashion icons, while his pal is the ex-husband of a pop superstar who rubs shoulders with movie stars. 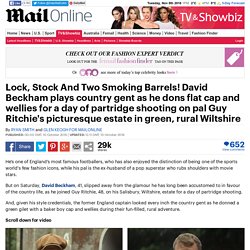 But on Saturday, David Beckham, 41, slipped away from the glamour he has long been accustomed to in favour of the country life, as he joined Guy Ritchie, 48, on his Salisbury, Wiltshire, estate for a day of partridge shooting. And, given his style credentials, the former England captain looked every inch the country gent as he donned a green gilet with a baker boy cap and wellies during their fun-filled, rural adventure. Scroll down for video Big shot: David Beckham enjoyed a day of pheasant shooting on pal Guy Ritchie's Salisbury, Wiltshire, estate on Saturday As one of the world’s most photographed men, even dressing for muddy dog-walking comes at a price – with David's outfit costing more than £1,000.

Give it some welly like David in boots by Le Chameau No slouch! Barbour: From farmers and fishermen to fashion royalty. Image copyright Rex Features/PA Celebrating its 120th year, Barbour's clothes have seemingly never been more fashionable. 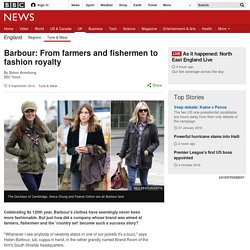 But just how did a company whose brand was aimed at farmers, fishermen and the 'country set' become such a success story? "Whenever I see anybody of celebrity status in one of our jackets it's a buzz," says Helen Barbour, sat, cuppa in hand, in the rather grandly named Brand Room of the firm's South Shields headquarters. Framed pictures detailing key points from the company's past cover the walls, while gleaming glass cabinets showcase some of its familiar coats. Then there is the huge dark wood table that appears to stretch into the distance. At the far end, hidden behind painted wooden shutters, lies the archive - a treasure trove of jackets and catalogues from years gone by which today's designers can raid for inspiration.

Image copyright Barbour The transformation has been striking. "When she took over she worked in every single department," Helen says. Login to Mintel Reports - Mintel Group Ltd. David Beckham enjoys a day of partridge shooting on pal Guy Ritchie's Wiltshire estate. International - Log in. Hot shots: hunting and shooting never looked so chic. “I don’t know what you think about when you go outside; I certainly want to be warm, I want to be dry, I want to be comfortable, I want to be cosy. 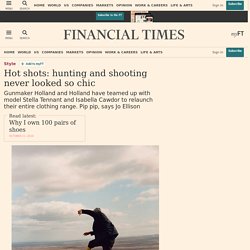 It needs to be practical but it needs to be elegant too, nobody wants to look horrible.” Sample the FT’s top stories for a week You select the topic, we deliver the news. Isabella Cawdor, a slight, 49-year-old with an ethereal, doll-like face, is describing the genesis of the newly launched collection of outdoor clothes she has co-designed for the gunmaker Holland & Holland with her “great friend”, the model Stella Tennant. “You’ve got to be able to climb over a barbed-wire fence in it,” adds Tennant of the clothes. The outdoors is something of a speciality for these particular English roses. While Holland & Holland, the London gunmakers founded in 1835, remains a bulwark of the British establishment, it has a quietly fashionable pedigree.

Neither are the clothes tremendously fashionable. How Burberry capitalised on the social media revolution. Executive Summary: In 2009, British luxury brand Burberry, like its competitors, was still unsure of how to build a valuable presence in social media. 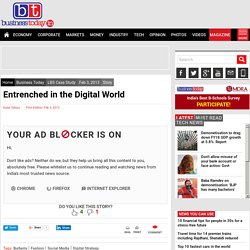 This case study looks at how it eventually capitalised on the new medium - without eroding the exclusive, aspirational qualities that are core to the world of luxury. In 2009, fashion house Burberry was feeling the pressure of the economic downturn, even though its financials had been strong over the past decade. Revenue growth dropped from 18 and 15 per cent in the previous two years to seven per cent that year, excluding the impact of foreign exchange rates, while operating profit margin shrank from about 15 per cent to 9.8 per cent. 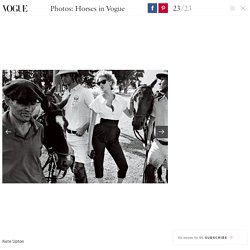