How to spend a weekend in Maribor, Slovenia. Day one: old towns and old vines Morning Glavni Trg, Maribor’s main square, in the old town, was once a marketplace. 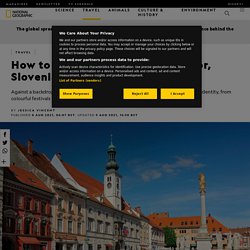 Second World War bombing badly damaged many of its pastel-coloured, 14th-century buildings, but most have now been restored to their former glory, and there are plans to reintroduce a farmers’ market — a tradition dating back to medieval times. Take it all in from the terrace of Nana, a cafe serving brunches made using local ingredients such as pumpkin seeds and honey. Afterwards, head to Gosposka Ulica and Jurčičeva Cesta, the main shopping streets, to browse Idrija lace in Slovenski Zakladi or handmade souvenirs at ARTmijeMAR. Refuel with homemade vegan ice cream at Slaščičarna Ilich, a cafe dating back to 1909. Afternoon It would be remiss to visit Maribor without experiencing its wine culture. JEDILNI LIST – PIZZERIA LILI. Skyscanner. 25 Reasons Why You Should NEVER Visit Slovenia. 1. 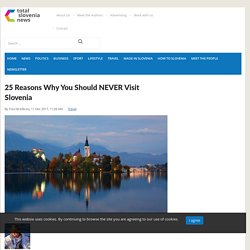 Nobody knows where the hell it is. Slovenia? Slovakia? Slavonia? Where is this little country exactly? Now check out the beauty of Slovenia below and never get lost again. Slovenia's 9 best outdoor adventures. Take to the pristine waters of Lake Bled by boat, mountain trek in the Julian Alps, or speed down gorges on a raft. 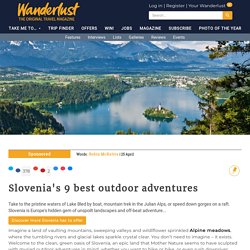 Slovenia is Europe's hidden gem of unspoilt landscapes and off-beat adventure... Discover more Slovenia has to offer Imagine a land of vaulting mountains, sweeping valleys and wildlflower sprinkled Alpine meadows, where the tumbling rivers and glacial lakes sparkle crystal clear. You don’t need to imagine – it exists. 8 reasons you must visit Ljubljana, Slovenia.

What do you look for in a city break? 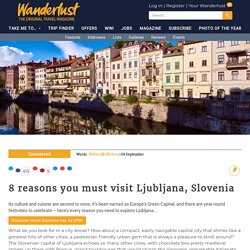 How about a compact, easily navigable capital city that shines like a greatest hits of other cities, a pedestrian friendly urban gem that is always a pleasure to stroll around? The Slovenian capital of Ljubljana echoes so many other cities, with chocolate box pretty medieval streets up there with Prague, grand townhouses that would charm the Viennese, remarkable Italianate churches and some of the finest art nouveau you will set eyes on anywhere. 8 magical reasons to visit Slovenia over Christmas and New Year. Fancy really getting into the Christmas spirit this year? 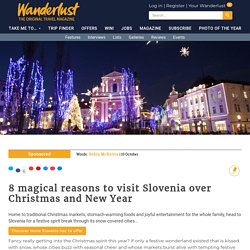 If only a festive wonderland existed that is kissed with snow, whose cities buzz with seasonal cheer and whose markets burst alive with tempting festive foodie delights. Well the good news I can report - as a travel writer who has visited over 100 countries – is that such a country does exist and it’s Slovenia. 7 wild and wonderful ways to spend winter in Slovenia. When I tell friends that Austrians and Italians are tempted to leave their own winter heartlands behind to travel to a ski and winter sports destination they sometimes look doubtful. 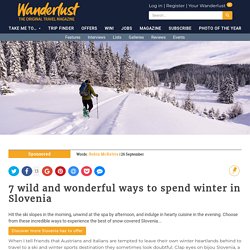 Clap eyes on bijou Slovenia, a European country that packs some seriously world-class winter sports into one easily navigable, compact and intensely beautiful package, and they are instantly convinced. I’d like to share my seven reasons that excellent value, seldom-crowded Slovenia is Europe’s top place to get wild and chill out in winter. 1: Make the most of being outdoors Lake Bled in winter (Slovenian Tourist Board) Slovenia is a compact country that is slightly smaller than Wales.

It may be small, but the country boasts an almost embarrassing natural beauty with winter seeing its massive Alpine mountains and craggy peaks laced with glorious snow, with plenty of fresh snowfalls through a long season that continues on to spring. 25 Reasons Why You Should NEVER Visit Slovenia. 1. 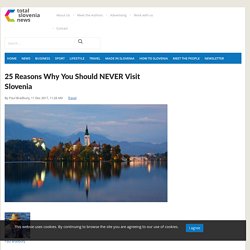 Nobody knows where the hell it is. Slovenia? Slovakia? Slavonia? Where is this little country exactly? Now check out the beauty of Slovenia below and never get lost again. Fascinating facts about Slovenia. 9 Fascinating Facts about the Slovenian Language. The most environmentally friendly countries to visit in 2017. Traveling can be tough on the environment. 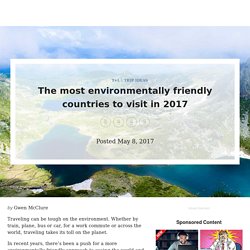 Whether by train, plane, bus or car, for a work commute or across the world, traveling takes its toll on the planet. In recent years, there’s been a push for a more environmentally friendly approach to seeing the world and experiencing other cultures. While some companies offer carbon credits or recommend guests re-use towels and linens to save the earth, there's more that can be done. The World Economic Forum’s 2017 Travel & Tourism Competitiveness Report looked at which countries are doing the best job in maintaining and promoting environmental sustainability. The report considered nine indicators to determine where countries ranked, including how tough environmental regulations are, how much they’re enforced, and how many environmental treaties the country has ratified. Slovenija niso samo Ljubljana, Bled in Piran ... Tu je nekaj po krivem spregledanih znamenitosti. - siol.net. 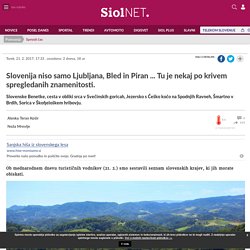 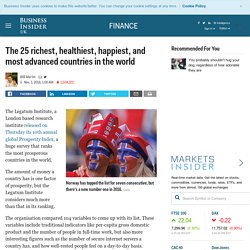 The amount of money a country has is one factor of prosperity, but the Legatum Institute considers much more than that in its ranking. The organisation compared 104 variables to come up with its list. These variables include traditional indicators like per-capita gross domestic product and the number of people in full-time work, but also more interesting figures such as the number of secure internet servers a country has, and how well-rested people feel on a day-to-day basis. The variables are then split into nine subindexes: economic quality, business environment, governance, education, health, safety and security, personal freedom, social capital, and natural environment. Find out the results below. 6 great things about Slovenia that have nothing to do with Melania Trump. By Noah CharneyAugust 29 Melania Trump, wife of Presumptive Republican presidential nominee Donald Trump, delivers a speech on the first day of the RNC on July 18, 2016 at the Quicken Loans Arena in Cleveland, Ohio.

(Photo by Chip Somodevilla/Getty) KAMNIK, Slovenia -- Most Americans don’t know much about Slovenia other than that it’s where Melania Trump is from. Falling in love with Slovenia: slow traveling in Bela Krajina. Slovenia was not initially on my bucket list. But, by the time I set foot there, I knew I could fall deeply in love with it.

For me, this trip to Slovenia was about to be a new experience in many ways: I was going to Slovenia -for the first time-glamping -first time too- at BigBerry -the recently launched glamping campsite at the Kolpa river-. To sum up to that, I was traveling in Summer, something which I haven’t done in the last 5-6 years, or more. The idea was to relax and slow travel the country, an out of the radar destination right in the Mediterranean. What I found was a country I could feel like home and people I could relate to in many ways. A warm welcome with a glass of wine from Bela Krajina I had spent most of my day from one airport to another and, after a one hour ride from Zagreb, I arrived to Big Berry, a beautiful campsite at warm Kolpa river.

Having grown up at a wine region in Spain and, although I am no expert, I was a bit skeptic about this unknown wine region. Slovenian ancient cave-dwelling olm salamander emerges from fifty eggs. The first 'baby dragon' from a batch more than 60 eggs has hatched in the caves deep below the Slovenian countryside. It emerged from its egg earlier this week in the Postojnska caves in Slovenia, where experts have been closely monitoring the ancient olms - a type of rare cave salamander - in an aquarium.

The new arrival is the first larva to hatch in captivity in a number of years, and biologists have managed to snap a fleeting glance of the animal in silhouette. Scroll down for video The first 'baby dragon' from a batch of more than 60 eggs has hatched in the Postojnska caves in Slovenia. Experts have been closely monitoring the ancient olms - a type of rare cave salamander - in an aquarium since the eggs were laid four months ago. For the last six months it has grown inside one of a clutch of eggs protected and carefully nursed by its mother, with the only a few of the eggs expected to hatch.

The eggs have been monitored by cave biologists for a number of months. Loaded: 0% Progress: 0% Ljubljana, Slovenia: what to see plus the best hotels, bars and restaurants. As capital of one of Europe’s most forested countries, it’s perhaps fitting that Ljubljana is this year’s European Green Capital. A city of just 300,000 inhabitants, Ljubljana has often been ahead of the game when it comes to green initiatives – from the introduction of a sophisticated waste management system (Ljubljana was the first EU capital to adopt a zero-waste programme) and the creation of new green spaces from degraded urban land, to electrically powered golf buggy-type vehicles (kavalirs) offering free transport around the old town, which is otherwise closed to traffic.

Official Green Capital celebrations kicked off last month, but there are numerous events taking place throughout the year. Ljubljana city guide: where to eat, drink and explore in the European Green Capital. The pace of life in Ljubljana’s compact Old Town feels several notches lower than in London. The cobbled streets are pedestrianised, meaning the gentle sound of footfall and conversation, rather than the grind of traffic, reverberates against facades.

Occasionally an electric whir can be heard. This summer will be the 25th since Slovenia declared independence from Yugoslavia, and Ljubljana, its capital, is European Green Capital 2016, having taken over the mantle from Bristol at the beginning of the year. That electric whir? That’ll be the Kavalirs, minibuses resembling golf carts, which have permission to drive on the fan cobbles of Mestni trg, the street running parallel to the River Ljubljanica, and are free of charge to use – just flag them down or call to be picked up (00 386 31 666 331). Centuries of Habsburg rule ended in 1918 and many buildings bear similarities to those in neighbouring Austria. River Ljubljanica (Shutterstock) Getting there More information visitljubljana.com. The Most Underrated Country in Europe — John Sees Earth. After Lake Bohinj we headed back into Bled and capitalized on the sunny skies and beautiful fall weather in town by paddling on a row boat to the island in the middle of Lake Bled, hiking to an amazing viewpoint overlooking the lake and castle below for lunch, and exploring the castle atop the cliff next to the lake for the afternoon.

Lake Bled has got to be one of the most picturesque and photogenic places I've ever seen, and it was made even better by the fall colors that accompanied the trees on the surrounding mountains. This May Be The Most Beautiful River On Earth » Beautiful Photography, Incredible Stories. Why Slovenia should be your next destination - MyHammockTime.com. It feels weird promoting the country I was born in, since one tends to have strong emotional ties to it, but I just have to write about its beauty:) So without further ado, let’s start. Is Slovenia the World’s Next Great Food Destination?

Ljubljana Leading the Way as a European Cycling Capital. New cycle track in Ljubljana with an added barrier for the cars. Photo by Mikael Colville-Andersen. Slovenia will leave you deeply in love with its lakes, caves, bees and history. The train entered the mouth of the cave and kept going... and going... and going... on a stunning subterranean trip that seemed to last for ever. It felt like we were heading for the bowels of the earth as the loco trundled for 1.5 miles past incredible rock formations. Slovenian Hostels Voted Best in the World on Leading Site. On Board Slovenia on Vimeo.

Slovenia travel guide. From magical caves and a charming capital to centuries-old castles and comfort cuisine: Slovenia is (still) Europe's hidden gem. Ljubljana: The cutest capital city in the world? Villages - English - Štanjel. 25th birthday of Slovenian anthem, a toast that matured with the nation. A blue flower found nowhere else.