Basic Income Gathers Steam Across Europe. By Daniel Raventós and Julie Wark / counterpunch.org In the last few months basic income—an unconditional cash payment to every member of the population—has been getting more and more attention in the media and social networks. 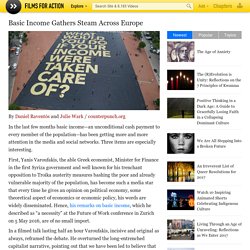 Three items are especially interesting. First, Yanis Varoufakis, the able Greek economist, Minister for Finance in the first Syriza government and well known for his trenchant opposition to Troika austerity measures bashing the poor and already vulnerable majority of the population, has become such a media star that every time he gives an opinion on political economy, some theoretical aspect of economics or economic policy, his words are widely disseminated. Hence, his remarks on basic income, which he described as “a necessity” at the Future of Work conference in Zurich on 5 May 2016, are of no small import.

In a filmed talk lasting half an hour Varoufakis, incisive and original as always, reframed the debate. Art. 110a (new) Unconditional basic income. Money. For free. It's been tested in Canada and India. Now one Dutch city wants to give it a whirl. The Dutch city of Utrecht wants to run a scientific experiment on its residents. 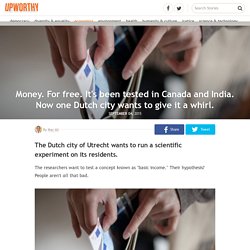 The researchers want to test a concept known as "basic income. " Their hypothesis? People aren't all that bad. Photo by FuFu Wolf/Flickr. Dutch city plans to pay citizens a ‘basic income’, and Greens say it could work in the UK. It’s an idea whose adherents over the centuries have ranged from socialists to libertarians to far-right mavericks. 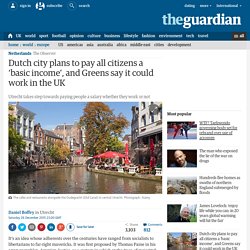 It was first proposed by Thomas Paine in his 1797 pamphlet, Agrarian Justice, as a system in which at the “age of majority” everyone would receive an equal capital grant, a “basic income” handed over by the state to each and all, no questions asked, to do with what they wanted. It might be thought that, in these austere times, no idea could be more politically toxic: literally, a policy of the state handing over something for nothing. But in Utrecht, one of the largest cities in the Netherlands, and 19 other Dutch municipalities, a tentative step towards realising the dream of many a marginal and disappointed political theorist is being made.

The politicians, well aware of a possible backlash, are rather shy of admitting it. The idea also hopes to target “revolving door clients” – those who are forced into jobs by the system but repeatedly walk out of them. The mayor of Albuquerque saw a homeless man with a 'Will work' sign. It gave him a great idea. The city of Albuquerque, New Mexico, used to ticket people for panhandling. 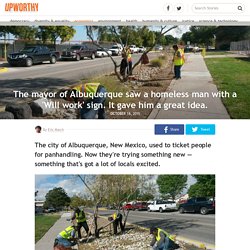 Now they're trying something new — something that's got a lot of locals excited. Participants in Albuquerque's "There's a Better Way" initiative working on a city beautification project. All photos provided by the city of Albuquerque, used with permission. Two days a week, an employee of a local homeless services organization drives a van around the city and asks homeless people if they want to work for the day. "If they say yes, they hop in the van. One Year Into India’s CSR Law: The Jury’s Still Deliberating. On April 1, 2014, India became the first country to legally mandate corporate social responsibility. 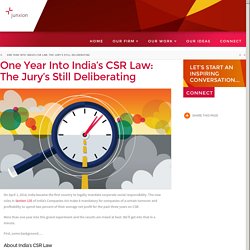 The new rules in Section 135 of India’s Companies Act make it mandatory for companies of a certain turnover and profitability to spend two percent of their average net profit for the past three years on CSR. More than one year into this grand experiment and the results are mixed at best. We’ll get into that in a minute. First, some background….

About India’s CSR Law The law, which stipulates that CSR activities should be undertaken only in “project/programme” mode, provides detailed guidelines regarding what kinds of activities are eligible across several categories. There are conflicting figures regarding the number of companies that fall within the purview of the law but 16,000-17,000 (out of more than 600,000 registered firms in India) is an oft-quoted range. It’s been 13 months after the rules came into force and implementation has been slow. A Dutch city is giving money away to test the “basic income” theory. “I just wanted to make movies,” Shane Dawson says of his unlikely fortune as a YouTube sensation. 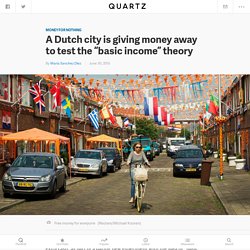 “I’d wanted to be a director since I was five, and had been making videos since I was a kid. Then YouTube came around during high school. I was making videos and it was just a place to put them, like storage.” That was in 2008. 12 million YouTube subscribers, a film (2014’s Not Cool), a hugely successful, trendsetting podcast, and a best selling book (this year’s I Hate Myselfie) later, and Dawson is remarkably the elder statesman of a standing-room-only BookCon panel that features fellow YouTube stars-turned-authors Joey Graceffa, Connor Franta, and Justine Ezraik.

But he’s still the Shane Dawson that his legion of devoted fans adore. “I haven’t slept,” Dawson says, as we begin our interview, seemingly to both excuse the scattered nature of his rapid-fire answers and as a way to instantly endear himself.