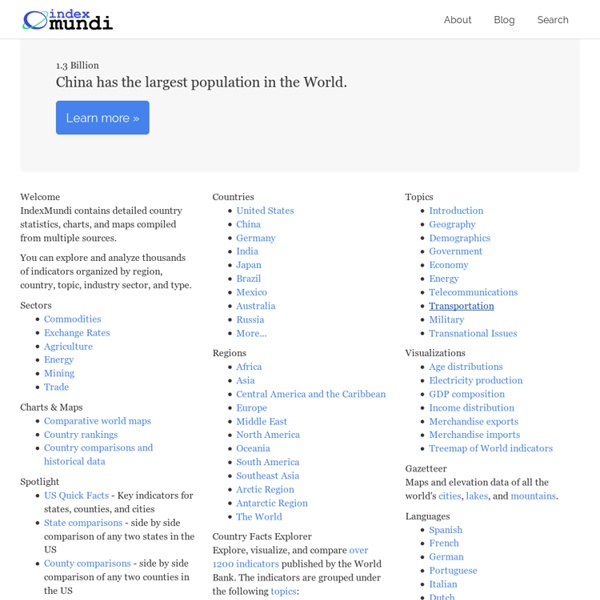 Country Facts For your browsing pleasure, we have organized countries by the geographic region where they are located. Country facts are also available in: Spanish, French, German, Portuguese, Italian, Dutch, Russian, Chinese, Japanese, and Korean Country Facts Explorer Explore, visualize, and compare over 1200 indicators published by the World Bank. The indicators are grouped under the following topics:

European Union countries Member countries of the EU (year of entry) The European Union has 28 member countries: On the road to EU membership Candidate countries Earth at Night 2012 Account Options Sign in Earth at Night 2012 E-Books  »  Brill Online - Asian Studies The complete alphabetic list of Brill's e-books. Filter by subject: < Any subject Asian Studies [814] The World Factbook People from nearly every country share information with CIA, and new individuals contact us daily. If you have information you think might interest CIA due to our foreign intelligence collection mission, there are many ways to reach us. If you know of an imminent threat to a location inside the U.S., immediately contact your local law enforcement or FBI Field Office. For threats outside the U.S., contact CIA or go to a U.S. Embassy or Consulate and ask for the information to be passed to a U.S. official. Please know, CIA does not engage in law enforcement.

African countries MenuSearchLanguage English | Français Home » Countries Countries In this section 40 Maps That Will Help You Make Sense of the World If you’re a visual learner like myself, then you know maps, charts and infographics can really help bring data and information to life. Maps can make a point resonate with readers and this collection aims to do just that. Hopefully some of these maps will surprise you and you’ll learn something new.

Maritime Security in Southeast Asia: U.S., Japanese, Regional, and Industry Strategies John Bradford, James Manicom, Sheldon W. Simon and Neil Quartaro Pirate activity in strategically important waterways around the globe, from the Strait of Malacca to the waters off the Horn of Africa, has garnered significant attention recently from states dependent on these waters for international trade and the free movement of goods.

40 maps that explain the world By Max Fisher By Max Fisher August 12, 2013 Maps can be a remarkably powerful tool for understanding the world and how it works, but they show only what you ask them to. So when we saw a post sweeping the Web titled "40 maps they didn't teach you in school," one of which happens to be a WorldViews original, I thought we might be able to contribute our own collection. Some of these are pretty nerdy, but I think they're no less fascinating and easily understandable. A majority are original to this blog, with others from a variety of sources. I've included a link for further reading on close to every one. Print edition: Volume 2, number 2, October 2015 [Asian Review of Books] Print edition: Volume 2, number 2, October 2015 16 October 2015 The latest print edition covering July through September 2015 is now available from leading on-line bookstores. Included in this issue are: Fiction reviews: Princess Bari by Hwang Sok-yong