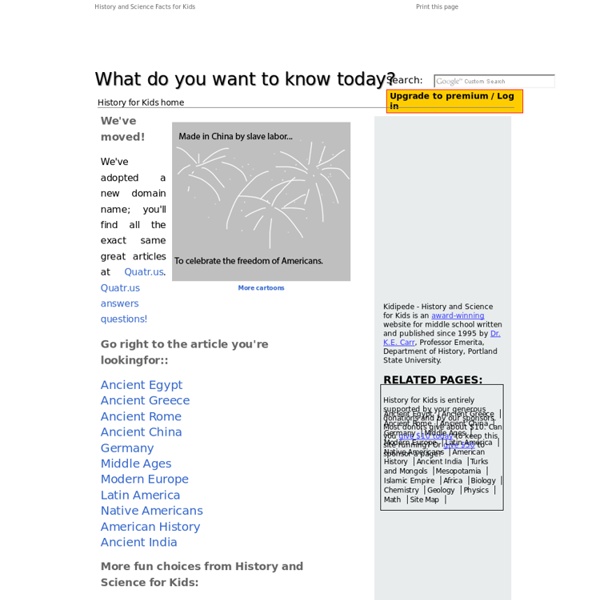 My Best of series You can find all of my “Best” lists in broad categories here. The link to that page can also be found at the top right of my blog: My Best Of Series I also have them all on another page where they are listed in the chronological order in which I originally posted them. Aztecs for Kids - Daily Life Like nearly all of the ancient civilizations, the rich lived in luxury and the poor worked. In the Aztec civilization, class structure was very important. Homes : The Rich: Homes of the nobles and wealthy were made of sun-dried brick. If you were very wealthy, you home could be made of stone. All homes were whitewashed to make them look clean and shiny.

Access VG1: Extra text: English in Jamaica The story of how English came to Jamaica is closely connected to one of the most shameful chapters in the history of the British Empire: the slave trade. The British conquered Jamaica from Spain in 1692 and the island soon became a producer of sugar. Harvesting sugar cane requires a lot of manpower, more than the British could supply themselves. World History Activities What’s Here The number of hands-on projects you can do for world history studies is limited only by your imagination. See how you can easily make ancient civilizations come alive for young students! How I Designed Our Ancient Civilizations Unit The world history information in our third grade social studies text left much to be desired: there were too many details and a lack of comprehensive focus.

Aztec Children The lives of Aztec children are fascinating in many respects. To understand how children fit into Aztec culture, and how they were honoured, we should go right back to the beginning... even before the children were born. Birth UNIT 1: DISCOVER ENGLISH SPEAKING COUNTRIES - English with Rose In this unit we'll carry out four different activities in order to learn such general facts of the English Speaking country you're working on as: - Its location in the world map.- Its flag.- Its official language.- Its currency.- Its total area.- Its President or Prime Minister (amongst other data) Sample unit plan for Part 1 - World History & Geography Sample unit plan This sample plan includes suggestions for introducing the course and covering Unit 1, Part 1 of the Student's Friend. The lesson plan may be adapted for use with later units by incorporating alternate activities such as those found in Teacher's Aids. Unit 1 - Origins of the Earth and Humans: the stage and the actors 1. Major Objectives At the end of Unit 1, students shall be able to - identify the major astronomic theory regarding the formation of the universe. - identify the major geologic theory regarding the structure of the earth's surface. - discuss the development of early man and human culture including agriculture.

Introduction to English-speaking Countries (Lesson Outlines) Foreign teachers at Chinese universities are sometimes asked to teach a course with a name such as "A General Survey of English-speaking Countries", or "An Introduction to English-speaking Countries", or similar. I taught this course for a semester in 2003, and found the lesson preparation quite overwhelming. This was especially the case since I was given very little guidance and no clear objectives. In the hope that it might be of some assistance to other teachers who find themselves in a similar situation, I have collected together some notes on how I ran the course, and the Microsoft Powerpoint presentations which I used during the lectures. Digital Storytelling Subjects: Art, Computers & Internet, Language Arts, Social Studies Grades: Title – Digital Storytelling By – Jennifer Henson Primary Subject – Language Arts Secondary Subjects – Computers / Internet, Social Studies, Art Grade Level – 9-12