Games to check out

It looks like Gravity Rush is coming to PlayStation 4. Hey Eurotoid, Tokyo Twilight Ghost Hunters is out now! As a Brit, I do miss the weirdness that defined the PS2. 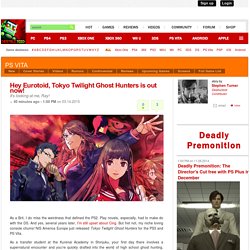 Play novels, especially, had to make do with the DS. Severed is full of one-handed vengeance. There’s something serene about exploring a desolate place for the first time. 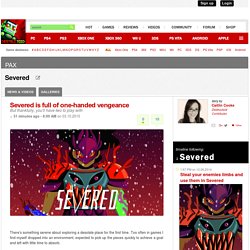 Too often in games I find myself dropped into an environment, expected to pick up the pieces quickly to achieve a goal and left with little time to absorb. Severed is the opposite of that. Despite playing a demo version, I felt like I lived in a different world while I walked through a desert into the remains of a home and out to a haunting forest where enemies appeared more like riddles and less like a forced mechanic. This is the kind of world I like to play in. The colorful art style of Guacamelee! The movement style is a refreshing version of old school first person dungeon crawlers, allowing you to choose directional paths in a four pointed compass-like system.

Once enough successful attacks have been built up, players can enter a mode which slows down the monster’s movements and allows them to sever appendages to go in for the final kill. White Night Is 2015's Creepiest Game Yet. I didn't read beyond the first two paragraphs because I haven't played it yet, just wanted to say that I am glad it got an article here. 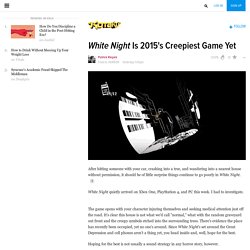 I was totally unaware of the game until I saw it on the list of releases on PS Blog last week. It looks really intriguing, I just am trying not to spend too much money on all the smaller games coming out in the next two months on top of BF:Hardline and Bloodborne... Flagged It's a well written article that mostly describes how the game works. Death Is Beautiful: Shadowrun Devs’ Necropolis Looks Ace. Certain games, you know the ones, give you that straight up “YES. 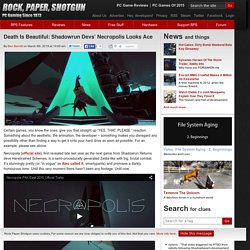 THAT. PLEASE.” reaction. Something about the aesthetic, the animation, the developer – something makes you disregard any possibility other than finding a way to get it onto your hard drive as soon as possible. For an example, please see above. Yep, Gigantic Still Looks Pretty Cool  Sublevel Zero, Radlevel 9001. The New Tales Game Plays Differently Than You'd Expect  The Deer God. In a lot of ways, The Deer God is a love letter to nature. 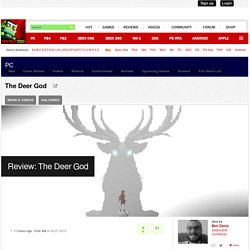 The idea was born from the developers' childhood memories of playing in the woods and seeing wild deer, and that admiration of the outdoors is quite apparent. The forests, fields, and other natural locations are simply gorgeous, and playing as a deer is as soothing as you might expect. However, these tranquil moments eventually give way to some rather unfortunate gameplay decisions. I got a good sense of what the developers were going for, and in some respects they succeeded. Sega fighting game Dengeki Bunko: Fighting Climax is actually coming to America.

An Anime-Inspired Platformer That's as Beautiful as It Is Mind-Bending. Microsoft The term “Metroidvania” gets thrown around a lot these days. 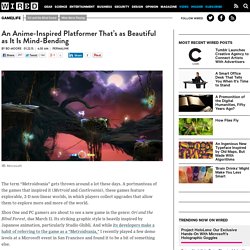 A portmanteau of the games that inspired it (Metroid and Castlevania), these games feature explorable, 2-D non-linear worlds, in which players collect upgrades that allow them to explore more and more of the world. Xbox One and PC gamers are about to see a new game in the genre: Ori and the Blind Forest, due March 11. Its striking graphic style is heavily inspired by Japanese animation, particularly Studio Ghibli. A Videogame That Teaches You to Write Poetry, Even if It Intimidates You. 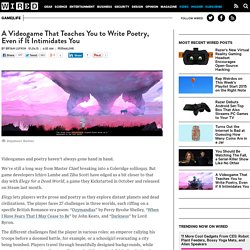 We’re still a long way from Master Chief breaking into a Coleridge soliloquy. But game developers Ichiro Lambe and Ziba Scott have edged us a bit closer to that day with Elegy for a Dead World, a game they Kickstarted in October and released on Steam last month. Elegy lets players write prose and poetry as they explore distant planets and dead civilizations. The player faces 27 challenges in three worlds, each riffing on a specific British Romance-era poem: “Ozymandias” by Percy Bysshe Shelley, “When I Have Fears That I May Cease to Be” by John Keats, and “Darkness” by Lord Byron. Tough but fun roguelike FPS Tower of Guns coming to PS3, PS4, Xbox One. Years After Release, Here's One Of Skyrim's Most Impressive Mods Yet. An Open-World Game with Questionable Photography. What's new in God Eater 2: Rage Burst?

I put a sizable chunk of time into the original God Eater 2 on the Vita late last year. 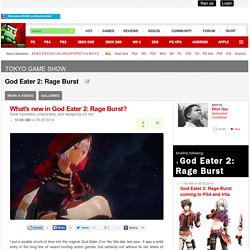 It was a solid entry in the long line of recent hunting action games, but certainly not without its fair share of issues. Tales of Zestiria's combat is fast and furious. Ask most Tales fans what game has their absolute favorite version of the Linear Motion Battle System (LMBS), and you're likely to get a wide variety of answers. 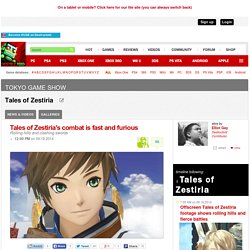 Some prefer the 2D combat from the Tales of Destiny PS2 remake and its sequel, while others hold up Tales of Graces F as representative of the direction the system should go. While I wasn't a huge fan of the latter game, I adored its fast paced, technical combat, and was let down when I eventually played through Tales of Xillia. It wasn't necessarily bad, it just wasn't what I wanted from the series. Fan-Made Pokémon Game Is More Exciting Than The Real Thing. Hyper Light Drifter is decadent, cryptic and classy.