Anthropause. Thanks to @mrmorrisphil for this photo of Peggy Angus’ cottage which appears in some of Ravilious’ work, such as ‘Furlongs’ dating from 1935 (artwork in a private collection). #Sussex. Aluminium. I have no doubt that the rise of our industrial civilization is a geologically significant event. However, saying this early that human impact will define a whole geologic epoch (#Anthropocene) lasting 10+ million years does feel a bit grandiose. Anthropi.

The Anthropocene epoch: have we entered a new phase of planetary history? It was February 2000 and the Nobel laureate Paul Crutzen was sitting in a meeting room in Cuernavaca, Mexico, stewing quietly. 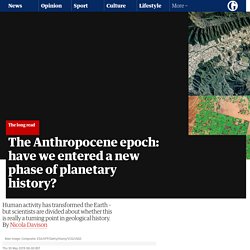 Five years earlier, Crutzen and two colleagues had been awarded the Nobel prize in chemistry for proving that the ozone layer, which shields the planet from ultraviolet light, was thinning at the poles because of rising concentrations of industrial gas. Now he was attending a meeting of scientists who studied the planet’s oceans, land surfaces and atmosphere. As the scientists presented their findings, most of which described dramatic planetary changes, Crutzen shifted in his seat. Anthropocene now: influential panel votes to recognize Earth’s new epoch.

Small section of Orkney #Gold #Mine - #SouthAfrica @CopernicusEU #Sentinel2 □️ 2015-2019. The hum of lawnmowers from nearby gardens, ice-cream vans jingling in the parks, blackthorn blossom foaming in hedgerows — and hot February sunshine felt as guilt upon the face... Concrete. Unsustainability (nepocide) David Attenborough tells Davos: ‘The Garden of Eden is no more’ Sir David Attenborough has warned that “the Garden of Eden is no more”, as he urged political and business leaders from around the world to make a renewed push to tackle climate change before the damage is irreparable. 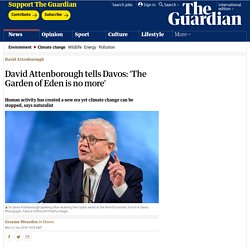 Speaking at the start of the World Economic Forum (WEF) in Davos, Switzerland, the 92-year-old naturalist and broadcaster warned that human activity has taken the world into a new era, threatening to undermine civilisation. “I am quite literally from another age,” Attenborough told an audience of business leaders, politicians and other delegates. “I was born during the Holocene – the 12,000 [year] period of climatic stability that allowed humans to settle, farm, and create civilisations.” That led to trade in ideas and goods, and made us the “globally connected species we are today”.

That stability allowed businesses to grow, nations to co-operate and people to share ideas, Attenborough explained, before warning sombrely: “In the space of my lifetime, all that has changed. Lovely infographic helps us to understand geologic time. I’ve been sent this without a source so please let me know if you know where this lovely piece of work came from.… Dr. Jacquelyn Gill sur Twitter : "My timeline is full of people talking about CO2 on other planets, Mars colonization, and climate change on Earth. Here’s what they all have in common: they remind us that, to paraphrase Mary Oliver, Earth is our “one wild.

Mark Williams: The Human Impact from a Geological ‘Anthropocene’ Perspective. The Anthropocene Leicester scientists respond to criticisms of new geological epoch — University of Leicester. Untitled. The Human Reach: Atlas. Pebble plunderers in Cornwall warned as tourist faces £1,000 fine. A holidaymaker who took pebbles from a Cornish beach was forced to travel hundreds of miles to return the souvenirs to avoid a hefty fine. 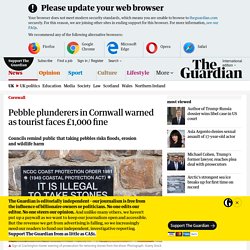 The man was traced to his home after taking a carrier bag full of stones from a beach at Crackington Haven near Bude. He was told that he faced a fine of up to £1,000 so he decided to return to Cornwall’s Atlantic coast and put the round grey stones back where he found them. Beaches 'spoiled': Should rock stacking be banned? Making a pretty pile of rocks on a beach seems like a nice way to spend a sunny afternoon. 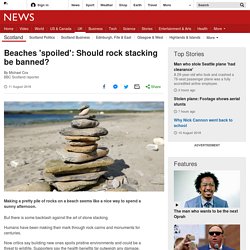 But there is some backlash against the art of stone stacking. Humans have been making their mark through rock cairns and monuments for centuries. Now critics say building new ones spoils pristine environments and could be a threat to wildlife. Supporters say the health benefits far outweigh any damage. Brian Romans sur Twitter : "This. I think the *concept* of the Anthropocene is extremely valuable: the realization that humanity’s actions have planetary-scale influence on Earth systems — but, discussions about where *exactly* to put a stratigraphic boun. PHOTO OF THE DAY. Native American looks at the newly completed transcontinental railline (1868).…

Mark Maslin sur Twitter : "Welcome to the #Anthropocene - new estimated weight of land mammals is now 36% humans, 60% our livestock while wild animals make up just 4%. @SimonLLewis and I explain how this & other major impacts happened in our book #TheHuma. As well as being the home of beautiful sponge cakes, The Priory Hotel, Wareham, unless I'm very much mistaken, has a line of #WW2 anti-tank obstacles in the grounds. #concrete #Dorset…

The collapse of Ancient Rome is written into Arctic ice thanks to the pollution from its coin-making operation. Was There a Civilization On Earth Before Humans? We never got back to aliens. Instead, that first conversation launched a new study we’ve recently published in the International Journal of Astrobiology. Though neither of us could see it at that moment, Gavin’s penetrating question opened a window not just onto Earth’s past, but also onto our own future. This morning starts w/ brilliant lecture from @rleinf, a world leader on the "#anthropocene. Christine Counsell sur Twitter : "The more geographers challenge me (hopeless non-geographer) to think about the anthropocene, the more I glimpse curricular coherence across substantive & disciplinary knowledge in geog, & just how powerful a strong, long. Here's how deep humans have dug underground in the past 100 years.

The article that changed my view … of humanity's impact on the planet. Solastalgia: TEDxSydney - Glenn Albrecht - Environment Change, Distress & Human Emotion Solastalgia. Generation Anthropocene: How humans have altered the planet for ever. Fascinating to see the history of London's #flood defences through its engineering 'strata' #Thames #HiddenHistory. Welcome to the #Anthropocene - weight of land mammals is now 30% humans, 67% our livestock and pets while wild animals make up just 3%… *****Kiruna iron ore mine (largest underground iron ore mine in world) #anthropocene BBC World News - The Travel Show, 27/10/2017 GMT. Determining when humans started impacting the planet on a large scale. Humans have so profoundly altered Earth that, some scientists argue, our current geologic epoch requires a new name: the Anthropocene. 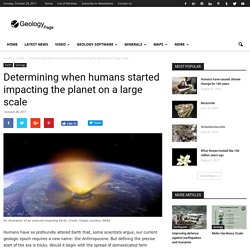 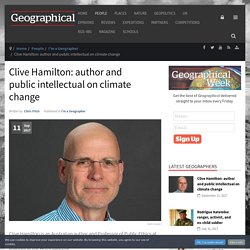 His latest book is ‘Defiant Earth’, an analysis of the Anthropocene What has happened in the last few decades is that the Earth itself has undergone a really profound rupture in its functioning. As we go into this new geological epic, the Anthropocene, we’re not talking about a continuation of trends of environmental damage that we all know about. Twitter. *****There's a compelling reason scientists think we've never found aliens (climate change) The International Space Station. 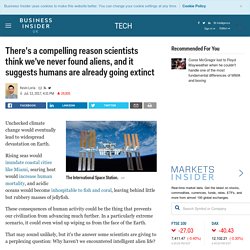 The blue dogs of Mumbai: industrial waste blamed for colourful canines. Authorities in Mumbai have shut down a manufacturing company after it was accused of dumping untreated industrial waste and dyes into a local river that resulted in 11 dogs turning blue. 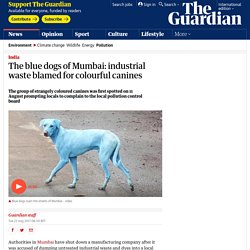 The group of strangely coloured canines was first spotted on 11 August, according to the Hindustan Times, prompting locals to complain to the Maharashtra Pollution Control Board about dyes being dumped in the Kasadi river, where the animals often swim. Footage shows the animals roaming the streets with bright blue fur. “It was shocking to see how the dog’s white fur had turned completely blue,” said Arati Chauhan, head of the Navi Mumbai Animal Protection Cell, told the Times.

“We have spotted almost five such dogs here and have asked the pollution control board to act against such industries.” Podcasts – Transformations 2017: Transformations in Practice. Glass microspheres as a potential indicator of the Anthropocene HT @HoloceneJ footprints & fingerprints. 'Omnipresent' effects of human impact on England's landscape revealed #Anthropocene HT @Catamount2112.

*****Alastair Humphreys on Instagram: “How strange that this feels normal. To be flying in the sky inside a machine with hundreds of other people, and to look down on a landscape…” Word of the day: “plastiglomerate” - a new Anthropocene stone formed of melted plastic, debris & organic matter. EGU2017 17142. .@tonybarnosky @erleellis @tewksjj. *****What if Earth treated us the way we treat Earth? (video clip) *****he whomsoever that canst draw the motorola from this carriageway shall be kinge of all post brexit englandde.

ENTITLE blog – a collaborative writing project on Political Ecology. By Heather Anne Swanson* There are plenty of troubling things about the Anthropocene, but one of its most troubling dimensions is the sheer number of people it fails to trouble. 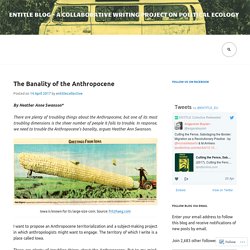 In response, we need to trouble the Anthropocene’s banality, argues Heather Ann Swanson. I want to propose an Anthropocene territorialization and a subject-making project in which anthropologists might want to engage.