'The camera cannot lie' - meaning and origin of this phrase. Meaning Literal meaning. 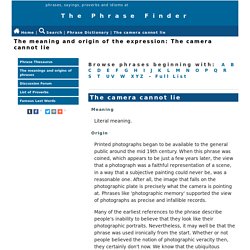 Origin Printed photographs began to be available to the general public around the mid 19th century. When this phrase was coined, which appears to be just a few years later, the view that a photograph was a faithful representation of a scene, in a way that a subjective painting could never be, was a reasonable one. After all, the image that falls on the photographic plate is precisely what the camera is pointing at.

Many of the earliest references to the phrase describe people's inability to believe that they look like their photographic portraits. The earliest citation of the precise 'camera cannot lie' phrase I have found is from The Evening News, Lincoln, Nebraska, November 1895, complete with an intimation of the early doubts about the literal truth of the phrase: "Photographers, especially amateur photographers, will tell you that the camera cannot lie. 10 Photography Quotes that Every Photographer Should Know. In this post Hákon Ágústsson shares some great photography quotes and explains why they’re worth knowing. 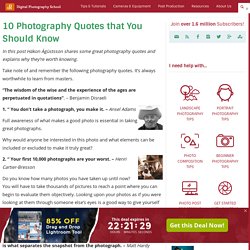 Take note of and remember the following photography quotes. It’s always worthwhile to learn from masters. 70 Inspirational Quotes for Photographers. B&W Film Developing Times. Features — Photograd. As your project is ongoing, what is the next step? 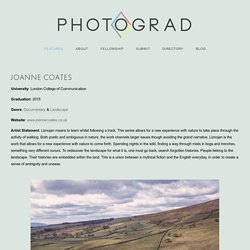 More journeys! In my free time I am still working on Liznojan, it is a project that needs solitude and time. Each time I make new work for the project I think of how it speaks and effects the project as a whole, so I’m taking my time over the final set of images until I feel the work is complete. What camera did you shoot Liznojan on? The project is shot all on film, though I don’t use a certain format or a certain film. Autograph ABP. Magnum photographers discuss their decisive moment – British Journal of Photography. Photos from the Real Life Version of 'The Beach' This article originally appeared on VICE Germany Last year, photographer Rebecca Rütten spent three months in a secluded hostel on a tropical island, where a group of backpackers found their utopia. 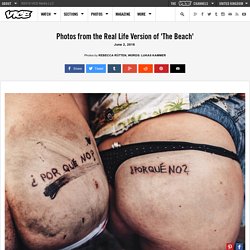 She documented the daily excesses of these scantily dressed free spirits, predominantly from the western parts of the globe and privileged enough to be able to escape normal life for months at a time. Rebecca tried to keep her objective distance as a photographer, but obviously she didn't want to miss the party either. Ryan Muirhead. This photographer made a nude zine of her tumblr friends and tinder matches. Fia Yaqub was big on Tumblr before she started sharing her own photography. 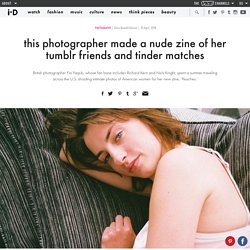 Her feed of beautiful nudes arranged in tasteful color-coordinated groupings attracted a following that included legendary fashion photographer Nick Knight. While Fia was in her second year at Salford University in the UK, Knight reached out to her and asked her to take over the SHOWstudio Tumblr for a time. Instagram, though, has been less helpful for someone interested in nude photography. "I get my images removed a lot," Fia tells me over the phone from Manchester. "I posted one last night and I knew it was going to get removed and it's already gone. How did Peaches begin? Marked Up Photographs Show How Iconic Prints Were Edited in the Darkroom.

e2v. A new book of unpublished photographs of a young amy winehouse captures her in happier times. Amy and Charles formed a friendship during the course of shooting and the portraits show a happy, healthy and relaxed Amy which are in contrast to the barrage of tabloid images that marked her last years. 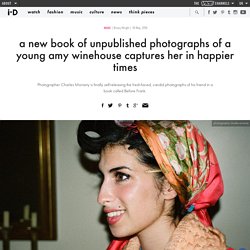 We spoke to Charles about working with Amy and the responsibility of preserving a friend's memory. Your shots are really beautiful and a reminder of happier times for Amy. Why did you wait thirteen years to publish them? It just never felt right before. I saw Asif Kapadia's movie Amy last year and I came away with this deep sadness and I wanted to leave people with something happier. Wes Anderson's Colour Palettes. The fictional worlds evoked in film by director Wes Anderson have such a precise colouration – the very particular pastel-hues that paint the skies, drench the buildings and dress the characters, render Anderson’s microcosms almost dream-like. 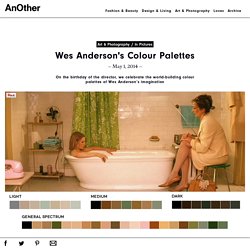 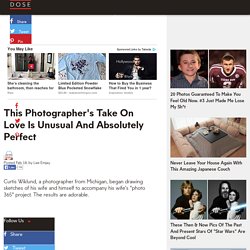 The two are photographers based in Michigan who, according to Curtis' website, "travel the world to photograph couples who are in love. " While Jordin was doing a "photo 365" project, Curtis decided to participate by drawing a picture for everyday of the year. The project turned out to be both very cute and an interesting character study of the two, as most of Curtis' illustrations ended up being of intimate moments from the couple's personal life. Shooting an entire thriller movie in one take. “One city. 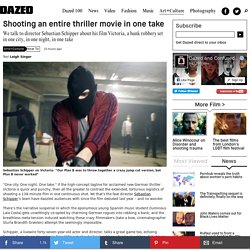 One night. One take.” If the high-concept tagline for acclaimed new German thriller Victoria is quick and punchy, then all the greater to contrast the extended, torturous logistics of shooting a 138-minute film in one continuous shot. Yet that’s the feat director Sebastian Schipper’s team have dazzled audiences with since the film debuted last year – and no wonder. DPA BLOG: PHOTOS:#NIGERIAN ARTISTE ORESEGUN OLUMIDE DISPLAYS HIS DRAWING THAT BEATS THE MONALISA PAINTING. All the images below are drawn by hand!!! 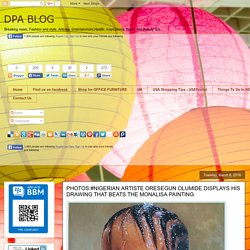 By Hand, hand and brush by a YabaTech graduate... Photo Of The artist, Oresegun Olumide: 10 Raw Photos That Show What an Open Relationship Is Really Like. Artist Keren Moscovitch understands how complicated open relationships are — she's been in one. Moscovitch told Refinery29 her photo series "Me Into You" is meant to capture all the emotions that come with being non-monogamous. "My partner and I had been in a monogamous relationship for several years, and we were beginning to blur the boundaries of our intimate life by opening the relationship to other participants," she told R29. "We played with swinging, kink, and polyamory, with the intention of getting closer and more open about who we each were as individuals. " Advertisement - Continue Reading Below. The home of photojournalism. Kodak Film Number to Film Type Cross Reference Table — Tom Philo Photography.

What those numbers or letters along the side of the film mean Table Notes I take photographs using all types of film. And when when I turn in a mixed collection of film types for processing unless I take great care in marking the film packages when I get them back from the processor what type of film is in which package is unknown. This can be a problem when you need to know what type of film was used to do a correct print. To solve this problem I went to Kodak's web site and tried to find out what what the number printed on the film meant. I received this sheets at no charge in less than 3 days after I sent my e-mail. This Guy Built His Own Automatic Film Processor, The Filmomat. This is incredible: German photographer Lukas Fritz wanted an easier way to process his film at home, so he spent a year creating the Filmomat, a fully automatic film processor that can handle everything from B&W 35mm film to 5×7-inch color slides.

Here’s a 5-minute video in which Fritz introduces the Filmomat and shows how it works: The machine is about the size of a microwave oven, and it contains multiple liquid compartments: a 6L fresh water tank, a water bath, and three chemical compartments. There’s a circular development tank for roll film, and a rectangular one for 4×5 and 5×7. It’s capable of remembering up to 50 different development processes, and each process can involve up to 3 chemicals and 10 individual steps.

How to Revive and Give New Life to Old Film Cameras. Film photography has made a comeback! Some would argue that just like Dre, its been here the whole time. But over the past few years, the aesthetic and cache of film photography has made a strong presence in the zeitgeist of contemporary digital photography. In this entertaining short film by Maison Carnot called "Disassembly," we see how to take an old non-functioning film camera and bring it back to life through a complete disassembly and repurposing of the old gear. The video itself is very well done, and even those not looking to actually take on the daunting task of taking apart every element of a film camera's lens and body, will find it interesting and educational. Being a professional photographer and full time photography professor, I am surrounded by film and digital cameras every day and I have never seen anything like this.

The Buffalo that could not Dream — GUP. The Gros Ventre and Assiniboine tribes inhabit 2,626,415 square kilometres of the Fort Belknap Indian Reservation in Montana, USA. Forced into the reservation in 1851 these historic enemies face the compromise of living together as the only solution to maintain their rich culture and history. German photographer Felix von der Osten’s (1989) portraits of the tribes capture the beautiful nobility and tradition of Native American culture, a lifestyle that remains unknown to many. The Hunt — GUP. For the Udege people of the Primorsky Krai region in Russia, tigers hold a special status in both their culture and environment. Skate Girls of Kabul. Next week renowned portrait photographer Jessica Fulford-Dobson presents a poignant body of work at the Saatchi gallery, one that has been several years in the making. Why Every Man Needs a Challenge. Théo Gosselin - Croco Magazine. Written by Carlos León You have probably already seen some of Théo’s work somewhere.

Giles Duley: When a reporter becomes the story. The World’s Most Famous DJ’s in London Photography Exhibition. Goldie. Scarlett Johansson, Brad Pitt, Julia Roberts Without Makeup. 31 Photographs That Will Show You The Future of Photography. 6 ideas from creative thinkers to shake up your work routine. Every seven years, designer Stefan Sagmeister (TED Talk: The power of time off) closes his New York design studio for a year-long sabbatical.

40 Movies about photography every photographer should watch. The Photography Show and Magnum Photos Present "30 under 30" Magnum Photos and The Photography Show are inviting IdeasTap members to enter an exciting competition to identify 30 of the best emerging documentary photographers aged 18-30 internationally. This competition will recognise and provide exposure for new photographic talent. The competition prizes will have an emphasis on career development, networking with industry contacts and maximizing on opportunities. Competition winners will participate in an exclusive 30 under 30 portfolio review event at The Photography Show, where they will receive critiques from top industry professionals from the editorial, publishing, museum, advertising, and gallery sectors.

Turpin captures London bus commuters on their way home after a long day, and his photographs are at once artistically compelling and potentially controversial. Is this voyeurism? Is it street photography? Film Photography Project. Derren Brown - 7 - 29 November 2014. Photomonth - East London Photography Festival. GUP - Guide to Unique Photography. The Intoxication Season.