Primed: The Back Pocket Guide for Trans Men and the Men Who Dig Them. 宇宙艦隊RAMBO. Amazon.co.jp : 黒尾受けアンソロジー 黒尾くん。 : アンソロジー. #ぼかろふぁんたじー劇場. Tegaki E. Sinja Trading Company. Janetter Plugins. Dork central, You Can Now Be An Anime Girl With New Software on... ◇ノベルティのカレンダーは紙物なのでたくさんございます。... Easy Ways to Stop Apples From Browning. No matter how crisp and juicy an apple may be, no one will want to eat it once it's turned brown. 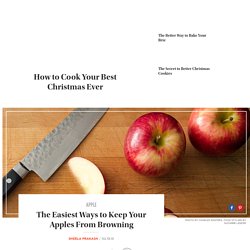 Apples brown when the flesh of the fruit is exposed to oxygen, and it's enough of a problem that that the USDA just approved an apple that's genetically modified to not brown when sliced (it's America's first approved genetically modified apple—yay?). That apple won't be in markets until at least 2016. Until then, here are a few old-fashioned tricks to prevent sliced apples from oxidizing: Photo by Shutterstock Citrus or Pineapple Juice What do these juices have in common? Salt & Water Dissolve 1/8 teaspoon of salt into one cup of water, add your apple slices, let them soak for a few minutes, then drain them. Honey & Water Stir two tablespoons of honey into one cup of water and soak your apple slices in the mixture for 30 seconds. ぷよぷよ!!クエスト(ぷよクエ)公式サイト ｜ おたのしみ Twitterアイコン きいろ. Aarinfantasy's YAOI Collection. User:EssArrBee/FalloutNewVegas. From S.T.E.P. 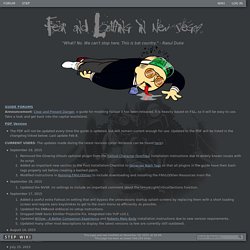 Project Wiki "What? No. We can't stop here. This is bat country. " - Raoul Duke. Detective Evangelion - EvaWiki - An Evangelion Wiki - EvaGeeks.org. Growing Your Own Miracle Fruit - Synsepalum dulcificum. What is Miracle Fruit you ask, well Miracle Fruit is a plant that produces somewhat tasteless red berries, HOWEVER, if someone where to eat the berry, then consume a sour substance ex. 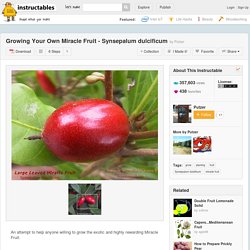 Lemon, Lime, Battery Acid(not recommended) it will taste like a deliciously sweet candy with no trace of sourness. Lemon juice will turn into lemonade, vinegar into nectar, etc. The effect can last half an hour to 2 hours, and does not impede any other part of your nervous system other than your taste buds and is in no way harmful. You might have some of these on hand, others you may have to order such as the seeds. 「チドリ」のプロフィール. Needs more sleep. HeRO server - Welcome! Galaco. Galaco (ギャラ子) is a Japanese VOCALOID originally developed by Internet Co., Ltd. and YAMAHA Corporation, under the Stardust Music, Inc. name. 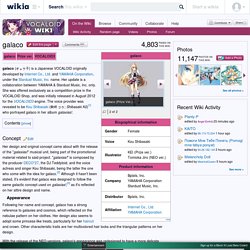 Her update is a collaboration between YAMAHA & Stardust Music, Inc. only. She was offered exclusively as a competition prize in the VOCALOID Shop, and was initially released in August 2012 for the VOCALOID3 engine. Bizarre youth crime, I’m fricken done, finally. The sequel to my first... Where to Buy Viniq Shimmery Liqueur. Dearest Mother:

RetailMeNot: Coupon Codes, Coupons, Promo Codes, Discounts. Good Omens news: Terry Pratchett and Neil Gaiman's 1990 novel Radio 4 adaptation gets a Christmas release date. Good Omens follows the attempts of an angel and a demon (Heap and Serafinowicz) to save the world from the antichrist, but all is not as it seems thanks to a bureaucratic mix-up. 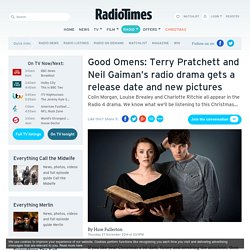 Soon, the fate of humanity is left to a gang of young children, a trainee witchfinder (Morgan) and a collection of garbled flashcards. It was written by Gaiman and Pratchett in 1990, and became a bestseller that remains popular to this day. Now, the two writers have joined up with the team behind the 2013 smash-hit radio adaptation of Gaiman's book and TV series Neverwhere which starred Benedict Cumberbatch, James McAvoy, Christopher Lee and Natalie Dormer. Gaiman (who appears in the promotional photos) has assisted returning Neverwhere director and adaptor Dirk Maggs with the scripts, and both he and Pratchett will make cameo appearances alongside the main cast. Bryan konietzko. I Am S piders Now... - nadinenihongo: Guide to Self-Studying Japanese ... DONGDESTROYER23 (@tokimekiwaku) Itadakimassachusetts, leikotanaka: [ b o t   f i g h t  . ] ↳  an...

Cirno and kawashiro nitori (paper mario and touhou) drawn by yurume atsushi. Desktop app will help turn your voice into songs. Have an idea for a song, but no keyboard or instruments handy? 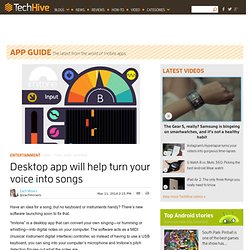 There’s new software launching soon to fix that. “Imitone” is a desktop app that can convert your own singing—or humming or whistling—into digital notes on your computer. The software acts as a MIDI (musical instrument digital interface) controller, so instead of having to use a USB keyboard, you can sing into your computer’s microphone and Imitone’s pitch detection figures out what the notes are. Because the app works as a MIDI keyboard, a range of other music recording programs can detect the notes and use them to create songs, said Evan Balster, the lead developer behind the project. Software like GarageBand can also convert the singing into other instruments like a violin or flute. A Kickstarter campaign for the app started on Tuesday. Balster aims to launch Imitone in May for Mac and Windows machines, with early access to the beta version for people who pledge at least $20. I Am S piders Now... - vegan-vulcan: thinksquad: Want to attend... Galaxxxy.

An easy way to generate tons of puns. Coupling Titles. Pokémon Collab. Creating Wands with crystals. The Grammarphobia Blog: How “terror” gave us “terrific” Q: I assume “horror” gave us “horrible” and “horrific.” 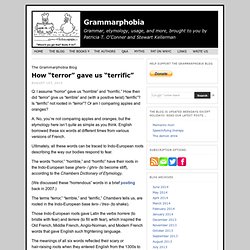 How then did “terror” give us “terrible” and (with a positive twist) “terrific”? Is “terrific” not rooted in “terror”? Or am I comparing apples and oranges? A: No, you’re not comparing apples and oranges, but the etymology here isn’t quite as simple as you think. English borrowed these six words at different times from various versions of French. Ultimately, all these words can be traced to Indo-European roots describing the way our bodies respond to fear. Cost to Hire a Hitman – Havocscope. Guide to register an account and download from Piapro. Today, I would like to write about a guide on registering a Piapro account. 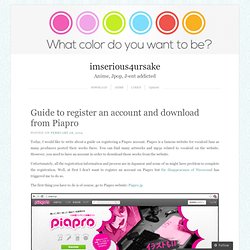 Piapro is a famous website for vocaloid fans as many producers posted their works there. You can find many artworks and mp3s related to vocaloid on the website. How to Put Your Hair Up In A Cute Bun. Comb your hair carefully to eliminate any tangles or knots.Take some hair from the top of your head. 3. 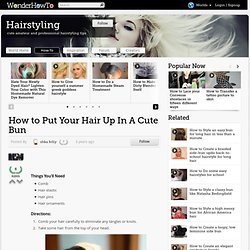 Tie off this hair with a hair elastic. 4. Don't pull off the ends. 5. Audio Cutter. 【MAD】PSO2でコンビニ【ブリトラ】 PokeTracer. 【かわいいライブ壁紙】はなまる日記.

Related:  RetailMeNot: Coupon Codes, Coupons, Promo Codes, Discounts   -  How to Put Your Hair Up In A Cute Bun   -  Education   -  Enterprise