AMAZON WATCH » An Ecosystem at Risk. Half the world's ecosystems at risk from habitat loss, and Australia is one of the worst. Habitat loss is the most insidious of all threats facing land-living wildlife, and protected areas like national parks are one of the best ways to combat the destruction. 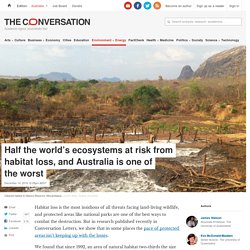 But in research published recently in Conversation Letters, we show that in some places the pace of protected areas isn’t keeping up with the losses. We found that since 1992, an area of natural habitat two-thirds the size of Australia has been converted to human use (such as farms, logging or cities). Half of the world’s land area is now dominated by humans. When we looked at specific habitats (or “ecoregions”), we found that in almost half of them, more habitat has been lost than has been protected. Of developed nations, Australia is performing the worst. Identifying ecosystems at risk – the new IUCN Red List. We know quite a lot about which species around the world are most endangered. 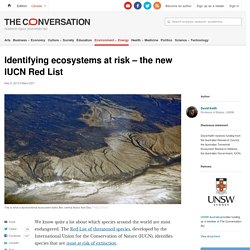 The Red List of threatened species, developed by the International Union for the Conservation of Nature (IUCN), identifies species that are most at risk of extinction. But scientists have become increasingly concerned that the habitats of species and the ecological processes that influence the relationships between species are not adequately considered. Now IUCN has developed a similar risk assessment framework for ecosystems, such as Florida’s Everglades, Australia’s Great Barrier Reef and Scandinavia’s Boreal Forests.

It lets the IUCN rank them as endangered, vulnerable or not threatened according to the risks that they face. Ecological Sustainability. In the same way that it is a mistake to conceive of the “economy” as an absolutely coherent functionalist system, shot through with the same logic and institutional dynamics at every point, it is a mistake to approach the “environment” as a single monolith that needs a kind of uniform defense. 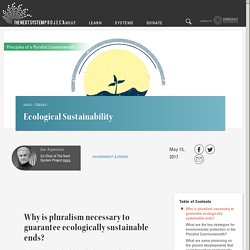 Instead, securing the health of the Earth’s ecological systems presents a plethora of challenges, all demanding responses that are appropriately scaled and attuned to the specific dynamics of the specific problems. Some problems—like carbon levels in the atmosphere—are truly global, and require a global response. Top 5 Examples of Sustainable Development. Although sustainable development is defined in multiple ways, the most often cited definition of the term comes from the Bruntland Report titled, “Our Common Future.” 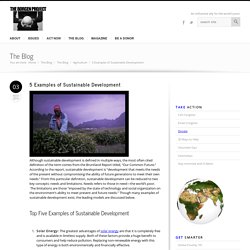 According to the report, sustainable development is “development that meets the needs of the present without compromising the ability of future generations to meet their own needs.” From this particular definition, sustainable development can be reduced to two key concepts: needs and limitations. Needs refers to those in need—the world’s poor. Eco-municipalities: Sweden and the United States. ​Examples of projects and local eco-municipality initiatives in the US: Town of Concord, MAThe Town of Concord's governing Board of Selectmen voted to adopt the four ecomunicipality principles as guiding Town policy for moving toward sustainability. 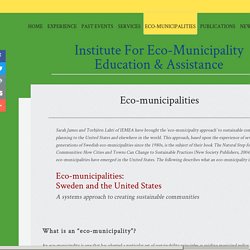 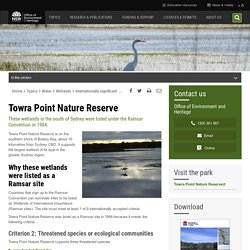 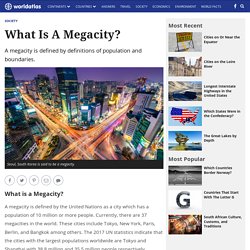 A megacity is defined by the United Nations as a city which has a population of 10 million or more people. Currently, there are 37 megacities in the world. These cities include Tokyo, New York, Paris, Berlin, and Bangkok among others. The 2017 UN statistics indicate that the cities with the largest populations worldwide are Tokyo and Shanghai with 38.8 million and 35.5 million people respectively. Animation: The World's Largest Megacities by 2100.

Throughout the course of human history, the biggest cities have always seemed impossibly large. 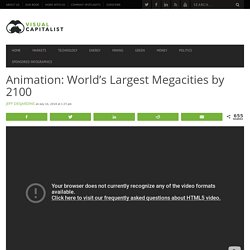 For many millennia, it was almost unfathomable for a city to sustain more than 1 million residents. In fact, it wasn’t until the 19th century that the largest cities globally, such as London and Beijing, were able to consistently hold populations beyond that impressive mark. Despite this, in the modern era, we’ve quickly discovered that a city of 1 million people isn’t remarkable at all. In China alone, there are now over 100 cities with a million people today – and as such, our mental benchmark for what we consider to be a “big city” has changed considerably from past times.

Thinking Big Just like a city the size of modern Tokyo was hard to imagine for someone living in the 19th century, it can be an extremely difficult thought experiment for us to visualize what future megacities will look like. Social Entrepreneurship. Pollinate Energy, an Australian social enterprise, wins support from Tata Trusts. Pollinate Energy has successfully secured support from Tata Trusts, one of the leading philanthropic organisations in India. 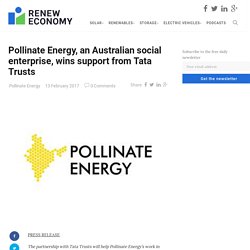 This fantastic partnership will support Pollinate Energy to expand their business model for last mile distribution of social impact products in the slums of Lucknow, and continue expansion through Uttar Pradesh – one of the poorest states of India. Pollinate Energy is one of Australia’s most prominent social enterprises, delivering life-changing products like solar lights and water filters to families living in slums across India. Currently operating in four Indian cities, Pollinate Energy sell products to people living in makeshift urban slums. The most needed product, the solar light, is environmentally friendly, reduces the harmful effects of kerosene and is significantly cheaper in the long term.

People are able to pay off their solar lights over several weeks, having purchased them from a locally employed workforce of salespeople called ‘Pollinators’. Australian solar company Pollinate Energy brings light to slums of India. Updated 26 May 2015, 12:02pmTue 26 May 2015, 12:02pm With indoor air pollution from kerosene lamps and stoves the second largest cause of death in India, one company, founded by Australians, has come up with a solution to the problem. 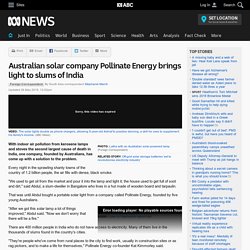 Every night in the sprawling shanty towns of the country of 1.2 billion people, the air fills with dense, black smoke. Businessinsider.com. A beacon of hope: 100,000 vulnerable Indians reached by a small Australian Social Enterprise with big business goals. A small Australian start-up is celebrating its most significant milestone to date: having reached 100,000 of India’s most vulnerable people.

Pollinate Energy, which sells life-changing sustainable products to Indians who live in grinding poverty in tent communities, marked the event with a visit to the community in Bangalore. 24-year-old Naga, a basket maker, bought a Pollinate Energy solar light for his family of four this week. World’s Best Cities - Best Cities. The cities that run the world. Some global cities, such as New York and London, have been dominant since the industrial age.

But new players including Mumbai, Sao Paulo and Dubai are on the rise. And this select urban cohort has growing influence on world affairs. While launching this month's Chicago Forum on Global Cities, Ivo Daalder, president of the Chicago Council on Global Affairs, said: "Previously we asked if global cities will drive the global economy. Now, we ask how they will do so. " So what is a 'global city'? Nothing defines global cities like economic power. Their banks and markets finance the global economy and their specialised, knowledge-intensive firms deliver services essential to its operation. 2018 Global Cities Report. But foreign direct investment is only a piece of the puzzle. The Chinese government’s exceptionally restrictive Internet regulations primarily impact global players and have resulted in China developing its own tech industry with a home court advantage.

As a result, the aforementioned Tencent, as well as e-commerce juggernaut Alibaba and search engine Baidu, have been able to flourish. Additionally, the country has bolstered its workforce with efforts aimed at educating its own citizens and attracting outside talent. At the same time, public and private funds are flowing into the start-up ecosystems in these top-tier cities, making entrepreneurship a new and viable career path while teeing up the next generation of Chinese business success stories. An urban synergy These efforts and many more come into play when examining how Chinese cities have sustained such phenomenal performance since 2008. Economic development done right The first step is to empower municipalities. World Cities - Global Sherpa. Cities are the world’s future. Urbanization continues to be a defining trend of international development, particularly in Asia and Africa. The way that cities develop will have profound, long-term, likely irreversible implications for the lives of most of the world’s people and the sustainability of the planet’s limited supply of natural resources.

As recently as 1800, a mere 3 percent of the global population inhabited urban areas. By 2011, more than half the world’s population lived in cities. Dubbo Attractions. Safari in our backyard, uncover our pioneering past and explore our creative soul. From the wide open spaces of Taronga Western Plains Zoo to the pitch-black confines of the Old Dubbo Gaol, a wealth of adventure is waiting for you in Dubbo.

See the wild in the wild when you safari in our backyard at Taronga Western Plains Zoo. Whether you travel by car, bike, electric cart or trek on foot, you'll venture through a 6km circuit featuring some of the most distinctive global wildlife habitats in the world, bordered by picnic grounds and magnificent bushland. Venture back in time and discover a well-preserved slice of history in Dubbo. Gaze upon the eerie gallows and hangman's kit at the remarkably intact 19th Century, Old Dubbo Gaol. Dubbo Regional Council - Dubbo Regional Council.

Welcome to Dubbo - Live, Visit, Invest, Events. Barangaroo » Barangaroo. The rise and rise of Barangaroo: how a monster development on Sydney harbour just kept on getting bigger. Barangaroo - Department of Planning and Environment. Barangaroo - City of Sydney. PAC submission. Here are 26 differences between Sydney's east and west. The big divide: the super rich versus struggle street. In some ways Ms Dienh, the manager of Mosman Nails and Waxing in Spit Road, is a living symbol of what has happened to wealth in Sydney. A Herald analysis of Bureau of Statistics figures on wages and salaries has found the rich are getting luxuriantly super rich while the poor remain stuck on struggle street. Overall, the average wage and salary income of a Sydney worker grew 17.1 per cent to $50,136 in the five years to June 2008, according to a breakdown of annual tax returns. Sydney to be split into three cities. The radical plan to split Sydney into three. Poet Kenneth Slessor called it a “dispersed and vaguer Venice”; journalist John Birmingham, a “Leviathan”.

From its earliest days, Sydney has wrestled with its history as an “unplanned” but naturally blessed city, where unchecked development competes with liveability and beauty. Another tale of two cities: access to jobs divides Sydney along the 'latte line' Daily Telegraph. Greater sydney region plan 0318. Comment: Living next door to Sydney - what the West wants vs what the 'Eastern Elites' say we should get. Having lived in Western Sydney for all of my 36 years, you might think I know a thing or two about my community and what we think is important. Over the last week or so, this seems to have been lost on some of the commentary club from the Eastern Suburbs who seem intent on pushing an airport onto my community, an airport that they would never accept for themselves.

Top Cruise Brands in the World. The Cruise Lines List: A Roundup of Different Cruise Lines - Cruise Critic. Welcome to Cruise Critic; we’re happy you decided to register to become a Cruise Critic Member. Forum Rules Important: Do Not Use Your REAL NAME as your USER NAME Important: Please disable your email verification software so that you receive our activation e-mail. Please add @cruisecritic.com to your email safelist.