Breaking Bad and the American Dream 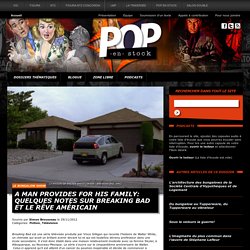 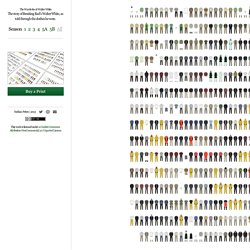 Season 1 2 3 4 5A 5B All Nathan Peters | 2013 This work is licensed under a Creative Commons Attribution-NonCommercial 3.0 Unported License. Breaking Bad: the transgressive journey of Walter White. Introduction Protagonist Walter White’s decision to ‘break bad’ takes viewers on a narrative journey that can be understood in terms of Jeff Ferrell, Keith Hayward and Jock Young’s criminological approach, which focuses on ‘the phenomenology of everyday life: the experiences of joy, humiliation, anger and desperation, the seductions of transgression and vindictiveness, the myriad forms of resistance and the repressive nature of acquiescence’ (2008: 205). 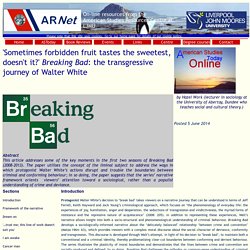 In addition to representing these experiences, Walt’s narrative allows insight into both a socio-structural and phenomenological understanding of criminal behaviour. Breaking Bad develops a sociologically-informed narrative about the ‘delicately balanced’ relationship ‘between crime and convention’ (Matza 1964: 63), which provides viewers with a complex moral discourse about the social character of deviance, conformity and transgression. Framework of the narrative. Alabama Liberal » Does Breaking Bad Say Something Universal About the American Dream? #breakingbad. 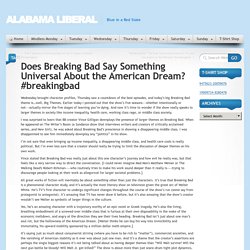 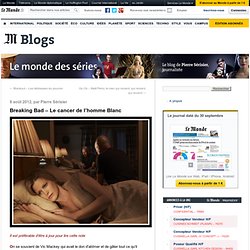 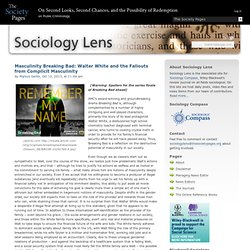 Thus, Breaking Bad is a reflection on the destructive potential of masculinity in our society. Even though we as viewers start out as sympathetic to Walt, over the course of the show, we realize just how problematic Walt’s actions and motives are, and that – although he tries to justify his actions as selfless and as rooted in his commitment to serving his family – what really drives him are notions of masculinity deeply entrenched in our society. Further Reading: Connell, RW. 1995. Kimmel, Michael. 1998. La Télévision est un existentialisme : réflexions sur Breaking Bad. Breaking Bad – Jesse Pinkman, la couleur des sentiments. <i>Breaking Bad</i>: The Foolishness of Masculinity‏  Breaking Bad is but a few episodes from completion and it's hard to say anything about it that has not been said, but I bravely intend to do so anyhow. 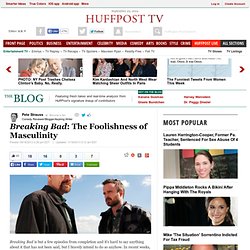 In recent weeks, there has been much discussion of the lack of strong female characters (which I personally think does the show a bit of a disservice), but not enough has been made of the show's persistent and fierce criticism of masculinity that has permeated the show throughout the five-season run. Die Like a Man: The Toxic Masculinity of Breaking Bad. Spoilers for the Breaking Bad finale follow. 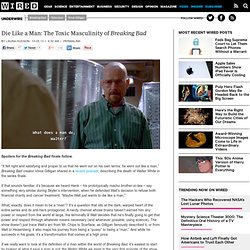 “It felt right and satisfying and proper to us that he went out on his own terms; he went out like a man,” Breaking Bad creator Vince Gilligan shared in a recent podcast, describing the death of Walter White in the series finale. Breaking Bad's Big Critique of the Macho (and Its Problem With Women) - Silpa Kovvali. The show's characters and its deepest conflicts were rooted in old ideas about gender. 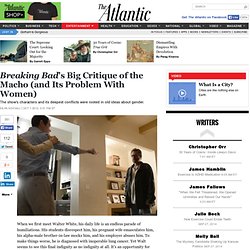 When we first meet Walter White, his daily life is an endless parade of humiliations. His students disrespect him, his pregnant wife emasculates him, his alpha-male brother-in-law mocks him, and his employer abuses him. To make things worse, he is diagnosed with inoperable lung cancer. Yet Walt seems to see this final indignity as no indignity at all. Breaking Bad: The Devil's in the Details. Walter White (Bryan Cranston) in season three of AMC's "Breaking Bad," which concludes on Sunday. 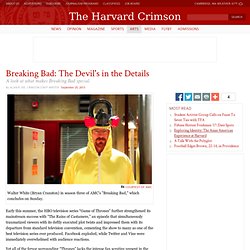 Early this summer, the HBO television series “Game of Thrones” further strengthened its mainstream success with “The Rains of Castamere,” an episode that simultaneously traumatized viewers with its deftly executed plot twists and impressed them with its departure from standard television convention, cementing the show to many as one of the best television series ever produced. Facebook exploded, while Twitter and Vine were immediately overwhelmed with audience reactions. Yet all of the fervor surrounding “Thrones” lacks the intense fan scrutiny present in the culture surrounding “Breaking Bad,” an AMC drama about a middle-class chemistry teacher named Walter White (Bryan Cranston) who transforms into a drug kingpin.

Money Changes Everything: The Ascent of Walter White. October 2nd, 2013 by Julie Withers “I did it for me. I liked it. I was good at it, and I was alive.” –W.W. I had to wait until the finale of “Breaking Bad” but at last, Walter White admitted that he was in to the meth cooking for the money. Walter is the common man; he lived his life the right way: nice family, secure teaching job, steadily paying off the mortgage of his suburban house with the pool. Then he gets the diagnosis. These days it is hard to make ends meet, healthcare is a vortex of pain, and the myth of meritocracy has never been more obvious. This is what resonates with Breaking Bad, the sense that a semi-schmucky guy on the losing end can be good at something and still make it, never mind the illegality and the extreme selfishness of his actions.

Walter White’s sickness mirrors America. It is safe to say that as “Breaking Bad” comes to a close, Vince Gilligan’s series is the moment’s Best Show In the History of Television. Incredibly, the show isn’t even over yet, and it is already a cult classic, with all the attendant prop fetishization and tourism industries that come with such a designation.

But as we approach the final episode, there’s an unanswered question: What makes the show so historically important? Critics have rightly lauded the series for, among other things, its cinematography, its dialogue, its character development and its carefully constructed plot twists. Why 'Breaking Bad' is the greatest thing on television. Breaking Bad’s Failed American Dream. The “most dangerous show on television” highlights our shredded social contract. In the third season of Breaking Bad, AMC’s critically acclaimed drama, there was a flashback to the apex of protagonist Walter White's life. While touring an empty prospective home—a home that viewers have come to know so well—Walter bemoans the lack of space for the many children that he plans on having.