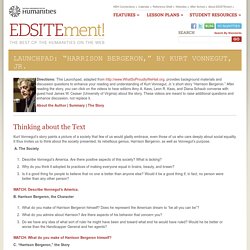 After reading the story, you can click on the videos to hear editors Amy A. Kass, Leon R. Kass, and Diana Schaub converse with guest host James W. Ceaser (University of Virginia) about the story. These videos are meant to raise additional questions and enhance discussion, not replace it. The American Dream Project. Brought to you by Cole Haan and Happy Marshall’s American Dream Project. 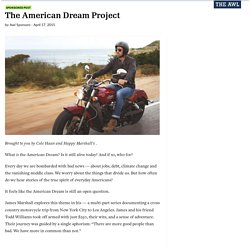 What is the American Dream? Is it still alive today? And if so, who for? Every day we are bombarded with bad news — about jobs, debt, climate change and the vanishing middle class. We worry about the things that divide us. Is The American Dream A Sham? – 8-Bit Philosophy. Terms & themes. Objective 3 from American Minority Literature. 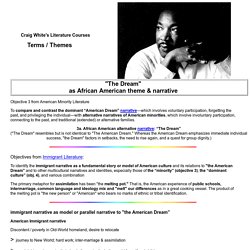 Chris Rock’s economic bombshell: What his “riots in the streets” prediction says about the American Dream. I’ve already written a bit about Chris Rock’s must-read interview with Frank Rich and, as much as I enjoy the comedian’s work, I didn’t expect to be returning to it quite so soon. 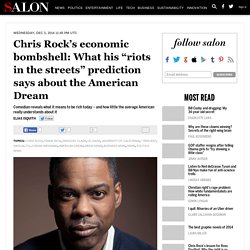 But although Rock’s comments on racism initially drew the most attention, a recent study from Gregory Clark, a researcher at University of California, Davis, has got me thinking that the comedian’s most insightful (and potentially radical) statement came earlier in the interview, during a brief digression about inequality. “Oh, people don’t even know,” he said, responding to Rich’s claim that class was still “the elephant in the room” of American politics. “If poor people knew how rich rich people are,” he continued, “there would be riots in the streets.” At first blush, this may not sound like such a profound statement; it could be easily mistaken for a comment about the politics of envy or simply the awesome scale of inequality today. But I don’t think that’s what Rock was getting at, really. Death of a Saleman: A Heartbreaking Work of Staggering Mediocrity. I once had a creative-writing teacher who would tactfully condemn a line of student verse by saying, in the long-suffering yet indulgent tone with which a wife might scold her husband for once again forgetting to put the cat out, “It sounds like poetry.” 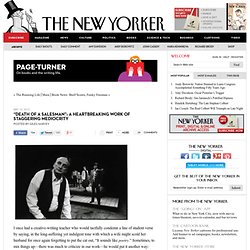 Sometimes, to mix things up—there was much to criticize in our work—he would put it another way: “This sounds like the kind of thing you might find in a poem.” Why this should have been such a defect was not entirely clear to us at the time. What our teacher was complaining about, it now seems obvious, was the tendency of students to cloak our rather banal thoughts and impressions in a poetical gauze—our tendency, after reading Keats, say, to fill our poems with bowers and nightingales and long, slow vowels. (“When was the last time anyone here saw a bower?” He asked flatly.) I thought of this class recently, when I went to see Arthur Miller’s “Death of a Salesman,” currently in revival at the Ethel Barrymore Theatre, in New York. Last Thoughts on Woody Guthrie.wmv. How Chris McCandless Died. Twenty-one years ago this month, on September 6, 1992, the decomposed body of Christopher McCandless was discovered by moose hunters just outside the northern boundary of Denali National Park. 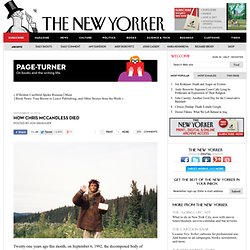 He had died inside a rusting bus that served as a makeshift shelter for trappers, dog mushers, and other backcountry visitors. Taped to the door was a note scrawled on a page torn from a novel by Nikolai Gogol: From a cryptic diary found among his possessions, it appeared that McCandless had been dead for nineteen days. A driver’s license issued eight months before he perished indicated that he was twenty-four years old and weighed a hundred and forty pounds.

After his body was flown out of the wilderness, an autopsy determined that it weighed sixty-seven pounds and lacked discernible subcutaneous fat. The American Novel . Six Novel Ideas . American Dreams. By James Nagel. 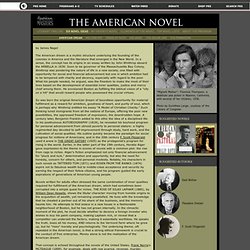 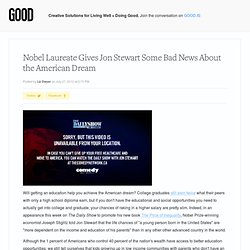 College graduates still earn twice what their peers with only a high school diploma earn, but if you don't have the educational and social opportunities you need to actually get into college and graduate, your chances of raking in a higher salary are pretty slim. Indeed, in an appearance this week on The Daily Show to promote his new book The Price of Inequality, Nobel Prize-winning economist Joseph Stiglitz told Jon Stewart that the life chances of "a young person born in the United States" are "more dependent on the income and education of his parents" than in any other other advanced country in the world.