Real Underground Kingdom That Has Existed for Millions of Years Went Unnoticed, Until Recently... By Kid Krunk / m.atchuup.com In 1991, Ho Khanh, a local farmer was out gathering wood in the dense jungle of Vietnam’s Phong Nha-Ke Bang National Park, when he stumbled upon an enormous cave entrance. 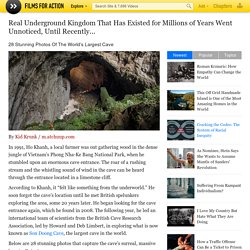 The roar of a rushing stream and the whistling sound of wind in the cave can be heard through the entrance located in a limestone cliff. According to Khanh, it “felt like something from the underworld.” He soon forgot the cave’s location until he met British spelunkers exploring the area, some 20 years later. He began looking for the cave entrance again, which he found in 2008. Below are 28 stunning photos that capture the cave’s surreal, massive beauty.

The name “Son Doong” cave means “mountain river cave.” John Spies on 500px │ via HuffPost. 10 brilliant ways to organize your refrigerator. Keeping your refrigerator clean and organized not only makes you feel better but can also help you preserve the quality of your food and make it last longer. 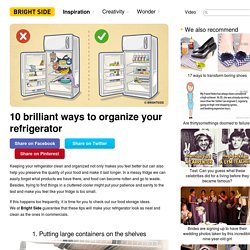 In a messy fridge we can easily forget what products we have there, and food can become rotten and go to waste. Besides, trying to find things in a cluttered cooler might put your patience and sanity to the test and make you feel like your fridge is too small. If this happens too frequently, it is time for you to check out our food storage ideas. We at Bright Side guarantee that these tips will make your refrigerator look as neat and clean as the ones in commercials. The off-grid house that costs just $300 a year to run.

Living off-grid doesn’t mean you need to shun society, take up pickling and become a homesteader 500km from the nearest pub. 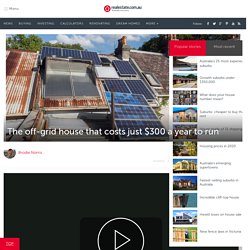 People all over Australia are taking steps to make their lives more self-sufficient and transform their homes for off-grid living. Twenty years ago Michael Mobbs began disconnecting his home from the grid. He didn’t have the luxury of acres of space for waste water treatment, rainwater tanks and a solar farm – or even a new home purpose built for self-sufficiency. 100% Natural Antiaging Skincare - Tata Harper Skincare. *Ingredients from Organic farming ** Clinical grade essential oils blend. 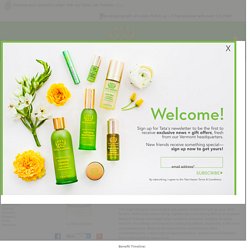 Why I love living in a 14 foot tiny house - Wellspring Blog. It’s a growing phenomenon in Australia and around the world. 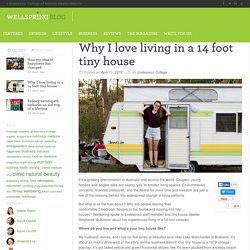 Couples, young families and singles alike are saying ‘yes’ to smaller living spaces. Environmental concerns, financial pressures, and the desire for more time and freedom are just a few of the reasons behind this widespread change in living patterns. But what is all the fuss about? Why are people leaving their comfortable 3-bedroom houses in the ‘burbs and moving into tiny houses? Wellspring spoke to Endeavour staff member and tiny house dweller Stephanie McKinnon about her experiences living in a 14 foot caravan. Where do you live and what’s your tiny house like? My husband, James, and I live on five acres of beautiful land near Lake Manchester in Brisbane. What made you decide to live in a tiny house? From Burning Man to Intentional Community. We started off as veteran Burning Man friends and we ended up as neighbors, chosen family members, business partners, co-parents and partners in the process of life. 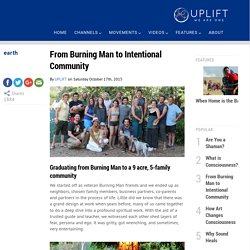 Little did we know that there was a grand design at work when years before, many of us came together to do a deep dive into a profound spiritual work. A village hidden in the rainforest - Kalu Yala. The Perfect Road Trip by Randy Olson. Be honest: at some point you’ve thought about going on a cross-country road trip, right? 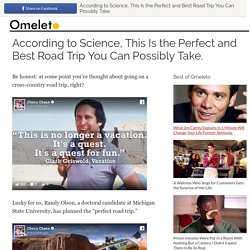 Lucky for us, Randy Olson, a doctoral candidate at Michigan State University, has planned the “perfect road trip.” With the aid of a sophisticated algorithm, Olson’s road trip lets anyone, anywhere hit all the landmarks in each of the 48 continental states in the shortest possible route. Just pick the point closest to home, and then drive around the country until you get back to the starting point.

Here’s the list of the landmarks along the road trip: Near Vancouver, There Is A “Secret” Island Where Everyone Lives Completely Off-Grid. There is a small island between Vancouver Island and Vancouver called Lasqueti that is 12 miles long and 3 miles wide. 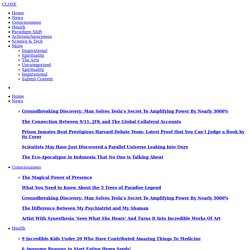 On this island, there is a community living off the grid who enjoys being separate from the mainstream Canadian culture. Most of the residents live simply. They have very little in the way of industry or economy and because they take almost nothing from the land their carbon footprint is rather small. According to the 2011 census , there are 426 people living there however the communities website says there are actually only around 350 permanent residents which include 70 children. Lasqueti is “an island of individuals, with poets, artists, physicists, fishermen, loggers, tree planters, designers, professional musicians, published authors, some small scale manufacturers, some commercial agriculture as well as professional consultants in education, engineering, forestry and alternate energy.” – Lasqueti Community blog.

The island also features one cafe and one bar.