Why Americans All Believe They Are 'Middle Class' For the Child of Undocumented Immigrants, the American Dream Can Be a Nightmare. A journey through a land of extreme poverty: welcome to America. Los Angeles, California, 5 December “You got a choice to make, man. 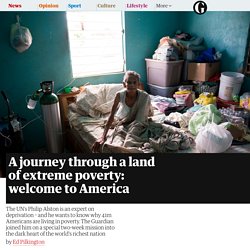 You could go straight on to heaven. Or you could turn right, into that.” We are in Los Angeles, in the heart of one of America’s wealthiest cities, and General Dogon, dressed in black, is our tour guide. Alongside him strolls another tall man, grey-haired and sprucely decked out in jeans and suit jacket. General Dogon, himself a veteran of these Skid Row streets, strides along, stepping over a dead rat without comment and skirting round a body wrapped in a worn orange blanket lying on the sidewalk. The two men carry on for block after block after block of tatty tents and improvised tarpaulin shelters. We come to an intersection, which is when General Dogon stops and presents his guest with the choice. Heaven. Then he turns to the right, revealing the “black power” tattoo on his neck, and leads our gaze back into Skid Row bang in the center of LA’s downtown. Alston turns right. Think of it as payback time. “Look up! Extensive Data Shows Punishing Reach of Racism for Black Boys. 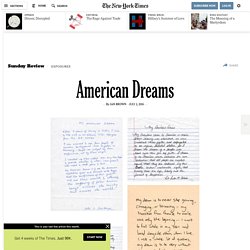 Photo. The American Dream Isn’t Alive in Denmark. Danophilia is alive and well in America. 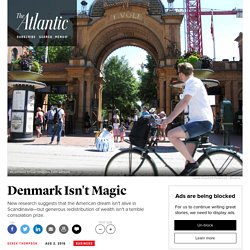 Bernie Sanders and other liberals have lauded Denmark’s social democratic dream state, with its free college tuition, nearly universal pre-K, and plentiful child care. While Republicans and Democrats both praise the virtues of what economists call “intergenerational mobility”—the chance for a poor young child to become at least a middle-class adult—America doesn’t lead the world in the pursuit of the American Dream. The standard social mobility statistic measures how much each generation's income is determined by its parents' income.

By that measure, northern Europe and Scandinavia have the highest social mobility in the advanced world, and Denmark tops the list. But this Danish Dream is a “Scandinavian Fantasy,” according to a new paper by Rasmus Landersø at the Rockwool Foundation Research Unit in Copenhagen and James J. If that’s true, how does Denmark rank number-one among all rich countries in social mobility? For many, college pays off. A 3-minute guide to the Bill of Rights - Belinda Stutzman. See a high resolution image of the original Bill of Rights here: Reconsideration of the Original Case against the Bill of Rights: a summary of the Bill of Rights and later amendments here: January 11, 1944, in the midst of World War II, President Roosevelt spoke forcefully and eloquently about the greater meaning and higher purpose of American security in a post-war America. 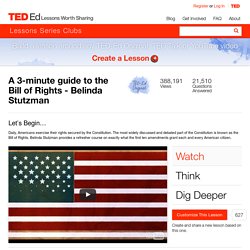 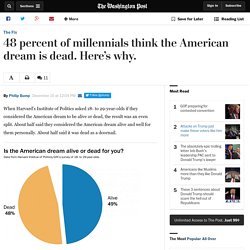 About half said they considered the American dream alive and well for them personally. About half said it was dead as a doornail. Harvard also asked millennials about a number of other issues, too; people in that age bracket like Donald Trump and Bernie Sanders more than other Republicans and Democrats, for example. But this bit of data on the American Dream stood out. Particularly in light of data released on Thursday by Pew Research. Living in a Converted Garage With a Master's Degree  I am suffocated by student debt. 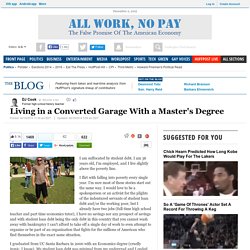 I am 36 years old, I'm employed, and I live slightly above the poverty line. Top Ten Songs about America by Bruce Springsteen. Novelist Walker Percy was a fan of Bruce Springsteen, calling him “my favorite American philosopher.” 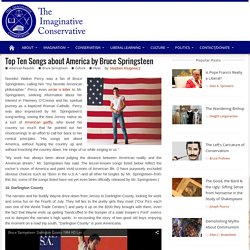 Percy even wrote a letter to Mr. Springsteen, seeking information about his interest in Flannery O’Connor and his spiritual journey as a baptized Roman Catholic. Percy was also impressed by Mr. Springsteen’s song-writing, seeing the New Jersey native as a sort of American gadfly, who loved his country so much that he pointed out her shortcomings in an effort to call her back to her central principles. “His songs are about America, without hyping the country up and without knocking the country down. Indian immigrants make it obvious that the American dream is alive and well. The success of Indian immigrants is a reminder of the great opportunities available in the United States. 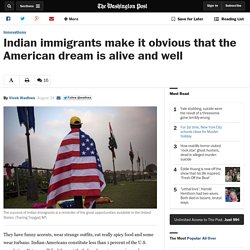 (Tsering Topgyal/AP) They have funny accents, wear strange outfits, eat really spicy food and some wear turbans. Indian-Americans constitute less than 1 percent of the U.S. population. Yet you will find them at the helm of great companies such as PepsiCo and MasterCard; as presidents and deans of America’s most prestigious colleges; at the pinnacles of journalism; dominating fields such as technology, scientific research and medicine; and thriving in industries such as hospitality, transportation and real estate.

They have also achieved extraordinary success in government: the governors of two of America’s most conservative states are of Indian origin, as are White House senior advisors and the U.S. Defining the American Dream - Video.