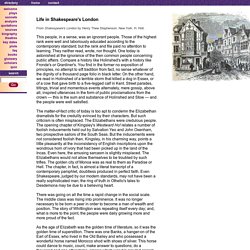 New York: H. Holt. This people, in a sense, was an ignorant people. Those of the highest rank were well and laboriously educated according to the contemporary standard; but the rank and file paid no attention to learning. The matter-of-fact critic of today is too apt to condemn the Elizabethan dramatists for the credulity evinced by their characters. There was going on all the time a rapid change in the social scale. As the age of Elizabeth was the golden time of literature, so it was the golden time of superstition. With this execution the Londoners could heartily sympathize, for they were superstitious to a degree incomprehensible at the present day. "And here a note of this steeple: as I have oft heard my father report, upon St. The people not only believed in ghosts and witches, but in magic of every sort. People, one and all, believed in fairies. How to cite this article: Stephenson, Henry Thew. Shakespeare's Patron - Queen Elizabeth. Queen Elizabeth: Shakespeare's Patron From Shakespeare's patrons & other essays by Henry Brown. 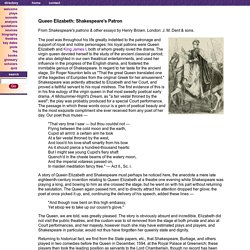 London: J. M. Dent & sons. The poet was throughout his life greatly indebted to the patronage and support of royal and noble personages; his royal patrons were Queen Elizabeth and King James I, both of whom greatly loved the drama. "That very time I saw — but thou couldst not — Flying between the cold moon and the earth, Cupid all arm'd: a certain aim he took At a fair vestal throned by the west, And loos'd his love-shaft smartly from his bow As it should pierce a hundred-thousand hearts: But I might see young Cupid's fiery shaft Quench'd in the chaste beams of the watery moon, And the imperial votaress passed on, In maiden meditation fancy free.

" — Act II., Sc. i. "And though now bent on this high embassy, Yet stoop we to take up our cousin's glove. " The Queen, we are told, was greatly pleased. "Beauty, truth, and Grace in all simplicity, Here enclos'd in cinders lie. " Footnotes. 08.01.07: Queen Elizabeth's Influence on Disguise in Shakespeare's Plays and Spenser's The Faerie Queene.

Overview When Elizabeth I gained the throne in 1558, women began to receive a voice in literature. 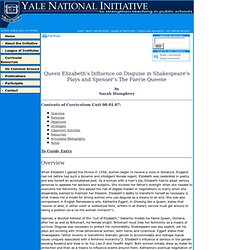 England had not before had such a dynamic and intelligent female regent. Elizabeth was celebrated in poetry and was herself an accomplished poet. As a woman with a man's job, Elizabeth had to adopt various personas to appease her advisors and subjects. She invoked her father's strength when she needed to overcome her femininity. Spenser, a devoted follower of the "cult of Elizabeth," blatantly models his Faerie Queen, Gloriana, after her as well as Britomart, his female knight.

An Analysis of Shakespeare’s Women. One of the persistent topics of interest in the field of Shakespeare studies is that which considers the various roles that women play in the bard’s comedies and tragedies. 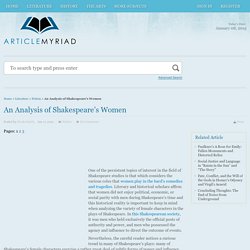 Literary and historical scholars affirm that women did not enjoy political, economic, or social parity with men during Shakespeare’s time and this historical reality is important to keep in mind when analyzing the variety of female characters in the plays of Shakespeare. In this Shakespearean society, it was men who held exclusively the official posts of authority and power, and men who possessed the agency and influence to direct the outcome of events. Nevertheless, the careful reader notices a curious trend in many of Shakespeare’s plays: many of Shakespeare’s female characters exercise a rather great deal of subtle forms of power and influence, and often do so in unusual and even subversive ways that challenge traditional gender roles. 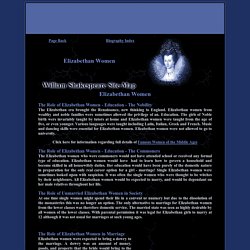 Elizabethan women from wealthy and noble families were sometimes allowed the privilege of an. Education. The girls of Noble birth were invariably taught by tutors at home and Elizabethan women were taught from the age of five, or even younger. Various languages were taught including Latin, Italian, Greek and French.