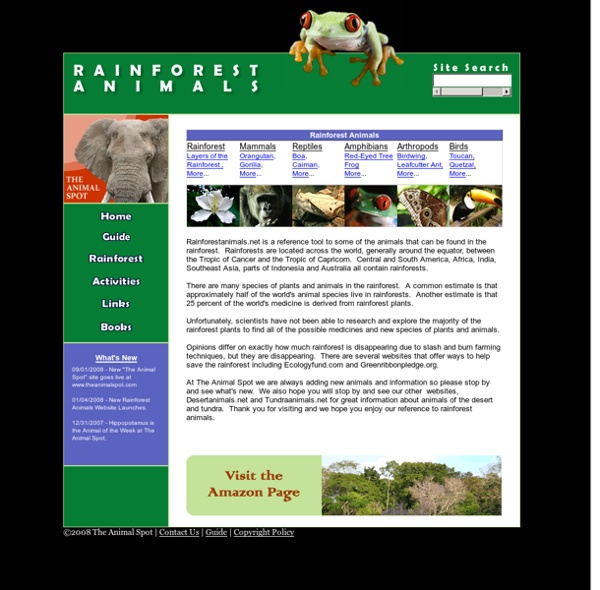 Rainforest Concern Facts For a downloadable booklet of rainforest facts and other materials for use in the classroom, please go to Resources for Schools Tropical rainforests - where and what are they? Tropical rainforests are found across the world between the Tropic of Capricorn and the Tropic of Cancer, 22.5° North and 22.5° South of the Equator. Almost half of the remaining tropical rainforest is found in tropical America, a bit more than a third in Asia and Oceania, and fifteen percent in Africa. Tropical rainforests cover approximately 8% of the world’s land surface - an area of approximately 1.2 billion hectares - and yet contain over half of the earth’s species of animals and plants. Medical Plants Rainforest Remedies Daniel Mowrey, Ph.D. Undiscovered Riches The number of potentially useful medicinal plants growing in the world's rainforests is estimated to be in the thousands. Certainly, mankind would benefit from the application of these plants.

Dangerous Animals The Amazon Rainforest is one of the world’s fascinating places. Its lush greenness is unlike anywhere else on Earth and for centuries, it has drawn travelers looking for adventure to it. Rainforests are associated with a feeling of calmness, and “Rainforest Sounds” CDs are bestsellers for anyone wanting relaxation music. You’d be forgiven for thinking it’s an oasis of tranquility and peacefulness. NASA: Earth Observatory Temperature 20°C to 25°C, must remain warm and frost-free Precipitation Tropical rainforest A tropical rainforest is an ecosystem type that occurs roughly within the latitudes 28 degrees north or south of the equator (in the equatorial zone between the Tropic of Cancer and Tropic of Capricorn). This ecosystem experiences high average temperatures and a significant amount of rainfall. Rainforests can be found in Asia, Australia, Africa, South America, Central America, Mexico and on many of the Pacific, Caribbean, and Indian Ocean islands.

Cool Trees A giant in the rainforests, the kapok tree can reach up to 200 feet in height, sometimes growing as much as 13 feet per year. Due to its extreme height, the kapok, or ceiba tree, towers over the other rainforest vegetation. The trunk can expand to nine or 10 feet in diameter. 20 Best Websites To Download Free EBooks We understand that reading is the simplest way for human to derive and constructing meaning in order to gain a particular knowledge from a source. This tendency has been digitized when books evolve into digital media equivalent – E-Books. It would be nice if we’re able to download free e-book and take it with us. That’s why we’ve again crawled deep into the Internet to compile this list of 20 places to download free e-books for your use. Great Websites to Download Ebooks

How Teachers Make Cell Phones Work in the Classroom A.P. Chemistry students use their cell phones to answer their teacher's question. When we talk about using cell phones in class, we’re not just talking about using cell phones in class. The idea of mobile learning touches on just about every subject that any technology addresses: social media, digital citizenship, content-knowledge versus skill-building, Internet filtering and safety laws, teaching techniques, bring-your-own-device policies, school budgets. At its core, the issues associated with mobile learning get to the very fundamentals of what happens in class everyday. At their best, cell phones and mobile devices seamlessly facilitate what students and teachers already do in thriving, inspiring classrooms.

Rainforest - Reference Rainforests are forests that get a great deal of rain and have extremely diverse wildlife. Rainforests are found in the tropical regions across the Southern Hemisphere, and contain more than 50% of all living species on Earth. Rainforests typically get an average of 1,850mm of rain every year. Avarage Weather The tropical rain forest is a forest of tall trees in a region of year-round warmth. An average of 50 to 260 inches (125 to 660 cm.) of rain falls yearly. Rain forests belong to the tropical wet climate group. The temperature in a rain forest rarely gets higher than 93 °F (34 °C) or drops below 68 °F (20 °C); average humidity is between 77 and 88%; rainfall is often more than 100 inches a year. There is usually a brief season of less rain. In monsoonal areas, there is a real dry season.

How to Start a Novel Right: 5 Great Tips It’s said that in life, there are two types of people: those who look at the glass as half empty, and those who see it as half full. But for those of us who’ve set the goal of starting a novel, I think it really comes down to how we view the blank page: those of us who find it exciting—full of possibility, hope, even adventure—and those who see it as intimidating—capable of inducing guilt, anxiety, even dread. If we’re being honest, we can probably all admit to having shifted between the two camps from time to time. It’s just too easy to become overwhelmed by the magnitude of the task.