8 Psychological Tricks of Restaurant Menus. A restaurant’s menu is more than just a random list of dishes. 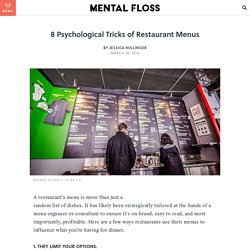 It has likely been strategically tailored at the hands of a menu engineer or consultant to ensure it's on-brand, easy to read, and most importantly, profitable. Here are a few ways restaurants use their menus to influence what you’re having for dinner. The best menus account for the psychological theory known as the “paradox of choice,” which says that the more options we have, the more anxiety we feel.

The golden number? Seven options per food category, tops (seven appetizers, seven entrees, etc.). Some restaurants have lost sight of this rule. Including a nice-looking picture alongside a food item increases sales by 30 percent, according to Rapp. In one Iowa State University study, researchers tested a digital display of a salad on kids at a YMCA camp. What Serena Williams has learned from venture investing. This is What Your Overactive Brain Needs to Get a Good Night’s Sleep. Photo by loli Clement via Unsplash. 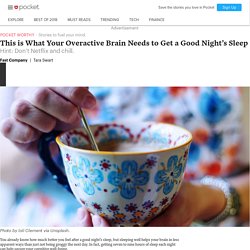 You already know how much better you feel after a good night’s sleep, but sleeping well helps your brain in less apparent ways than just not being groggy the next day. In fact, getting seven to nine hours of sleep each night can help secure your cognitive well-being. Why Paper Is the Real ‘Killer App’ The difference now is that there’s a return to traditional techniques by the digitally savvy. 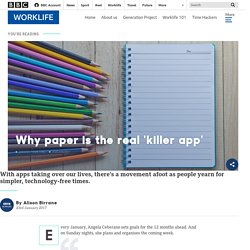 Many are successful vloggers, work in tech, or are experts in new media. And this latest trend has helped boost sales of stationery like Moleskine and Leuchtturm1917 notepads, the companies say. For its part, Moleskine has seen double-digit growth annually over the past four years, according to Mark Cieslinski, president of Moleskine America. Leuchtturm1917 marketing manager Richard Bernier says it was about June 2016 when sales went viral, due in no small part to the popularity of bullet journaling, a popular form of list-keeping, among the online community. Glass half-full: how I learned to be an optimist in a week. I’ve been called many things in my life, but never an optimist. 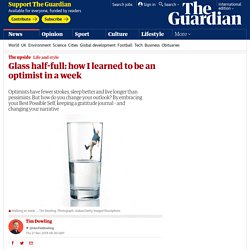 That was fine by me. I believed pessimists lived in a constant state of pleasant surprise: if you always expected the worst, things generally turned out better than you imagined. The only real problem with pessimism, I figured, was that too much of it could accidentally turn you into an optimist. But accidental optimism is not one of the known dangers of pessimism, a list that does include career impairment, poor health and early death.

Optimism, by contrast, is associated with better sleep and lower levels of cardiovascular disease. This Emotional Intelligence Test Was So Accurate It Was Creepy. Placeholder for captionPhoto by Gabriel Matula. 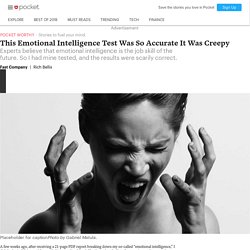 A few weeks ago, after receiving a 21-page PDF report breaking down my so-called “emotional intelligence,” I did the logical thing and forwarded it to my boyfriend. In the Future, Everything Will Be Made of Chickpeas. Photo by sot / Getty. 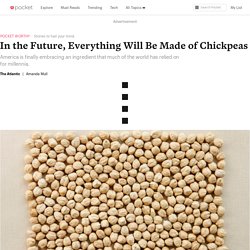 In 2007, Poorvi Patodia was pregnant and felt like she was eating too many chips. What Is It Like to Be a Man? Naked Man Crouching in Mid-Air by Ewan Frazer; private collection/Bridgeman Images. 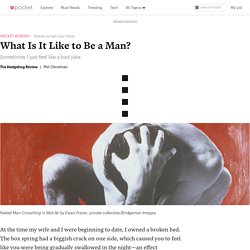 At the time my wife and I were beginning to date, I owned a broken bed. The box spring had a biggish crack on one side, which caused you to feel like you were being gradually swallowed in the night—an effect seriously exacerbated by the presence of a second person. Why do we think cats are unfriendly? - BBC Future. Take the way cats rub themselves against their owners. 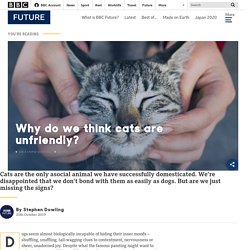 This used to be thought of as a kind of territory marker, like wild cats might do on trees or other landmarks in their territory. But when they do it on people, it’s usually a sign of affiliation – the cat is transferring its scent onto your skin, and at the same time transferring yours onto its fur. This is what feral cats do with other cats they are allied with. It is a way of creating a “common scent” which distinguishes friend from foe. Why Women’s Shoes Are So Painful. Photo by To Melville / Reuters. 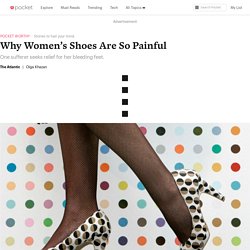 It’s not that I think wearing Toms with socks to work is a good look, per se. I admire your d’Orsay oxfords and fun mules. But unfortunately, when it comes to shoes, my only criteria is “Will these cause my feet to dribble blood all over my open-plan office?” I am simply not meant to wear professional office flats. When You Burn Fat, Where Does it Actually Go?

10 Ways the Bicycle Moved Us Forward. How two little wheels spun a revolution in dating, fashion, medicine, and space travel. 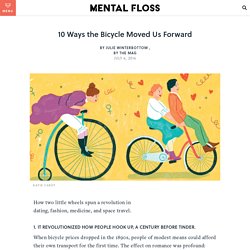 When bicycle prices dropped in the 1890s, people of modest means could afford their own transport for the first time. The effect on romance was profound: Long-distance courtships were possible. People could date outside their parishes, which, according to British geneticist Steve Jones, widened the gene pool, making the bicycle “the most important event in recent human evolution.” Fifty years before Jackie Robinson broke baseball’s color barrier, Marshall “Major” Taylor was a star of professional track racing, which at the turn of the 20th century was the most popular sport in America. Welcome to the Green Machine.

A woman once told me, after her life had taken an unexpected turn, that if you live long enough, pretty much anything can happen. That thought was in the back of my mind on a cool morning last November as I sat in the covered bleachers overlooking the wide expanses of Hilton Field parade grounds at Fort Jackson, in Columbia, South Carolina. Across the field, about a thousand camo-clad soldiers marched in formation out of a pine forest, emerging from the green and white fog of detonated smoke grenades. They came toward us across the dead winter grass, in five companies, Alpha through Echo, to the wild whoops and cheers of the crowd and the strains of “Soldiers,” a rousing modern rock song with lyrics like “This is a perfect day to die” and “With our final breath, we will fight to the death—we are soldiers, we are soldiers.”

Secrets of People Who Stay Happy in the Worst Circumstances. Photo from Drop the Label Movement/Unsplash. Bad things happen both personally and professionally. Guatemala is the Land of Unknown Ancient Food Traditions. T's getting close to lunchtime at the market in San Juan La Laguna when a vendor named Horacio tells me that I need to try some puchon-ik. San Juan is a quiet village of around 10,000 people in the highlands of central Guatemala, on the shore of Lake Atitlán and within walking distance of several volcanoes, including one that's spewing puffs of ash on this particular afternoon.

At the lakeshore, motorboats zoom up to the wooden dock several times an hour to drop off small groups of European backpackers or local women balancing baskets of food on their heads. The Surprising Reason Zebras Have Stripes. Are you sure this is a zebra? Photo from Tim Caro. A World Without Retirement. Getty Images We are entering the age of no retirement. How Facebook Devalued The Birthday. Image courtesy of Glenn Fleishman. Why do people hate vegans? From the hunger strike to the edible projectile, history offers abundant examples of food being used for political ends.

The Glamorous, Sexist History of the Women’s Restroom Lounge. 4 Reasons Why You're Always Hungry. What Google knows about you might be a shock. Here's how to manage or delete your activity. The Obesity Era. Photo by Saurabh Naik / EyeEm / Getty Images. When It’s Good to Be Antisocial. 38 Wonderful Words With No English Equivalent. Not Just a Pretty Boy. Photo by Toranin Jindathai / EyeEm/Getty Images. Why Don’t More Men Take Their Wives’ Last Names?

Photo from Heritage Images / Getty. Digital dystopia: how algorithms punish the poor. A 100-Year-Old Holocaust Survivor on How Books Save Lives. What the Aztecs Can Teach Us About Happiness and the Good Life. Here’s What Happened When I Complimented Everyone I Met for an Entire Day. The Psychological Importance of Wasting Time. Travel - What Japan can teach us about cleanliness. Everything You Never Wanted to Know About Artificial Sweeteners. How Smart Exercise Keeps You Younger for Longer. I Stopped Working Out Daily. Here’s What Happened. How We Judge Others is How We Judge Ourselves. Why Americans Smile So Much. Dyslexia Doesn’t Work the Way We Thought It Did. My Life Without Sugar. Open-Minded People Have a Different Visual Perception of Reality. 27 Words You Should Never Use to Describe Yourself. An Ode to Being Old. How Many Hours of Sleep do You Actually Need? How One Kid Stopped the Contamination of a River.

Jenny Odell on why we need to learn to do nothing: ‘It's a reminder that you're alive’ To Tell Someone They’re Wrong, First Tell Them They’re Right. English Is Not Normal. How Giving Up Refined Sugar Changed My Brain. Lonely? Short of Friends? Try Looking at It Differently. My Family’s Slave. Ireland’s Dingle Peninsula Knows How to Eat. Raising your kids in the city? Here’s why it’s the best. How the English Failed to Stamp Out the Scots Language.

Burnout Runs Deeper Than “Too Much Work” 19 Things You Might Not Know Were Invented by Women. How I Finally Learned to Sleep. Do Certain Sounds Enrage You? Neurologists May Know Why. The Like Button Ruined the Internet. Every Interview Question is Really This Question. Six ways to stay healthy when you're stressed. The Strongest Predictor of Men’s Well-Being Isn’t Family or Health. 10 Things Incredibly Likable People Never, Ever Do (and Why You Love Them for It) Future - The simple words that save lives. I Believe I Can Fry. The Most Relaxing Vacation You Can Take Is Going Nowhere at All. 3 Signs You’re the Toxic Person in Your Workplace (and What to Do About It)

Emotional Intelligence Is the Real Secret to Getting Promoted Faster. Bring Back Handwriting: It’s Good for Your Brain. Why Time Management Is Ruining Our Lives. How the English Language Is Taking Over the Planet. 7 Morning Habits That Can Affect Your Entire Day. Feel like you’re about to lose it? It’s a good time for a Meta-Moment. How to take better notes. How To Finally Stop Procrastinating (For Real This Time) Why the Food in Okinawa is Not Like Anything in the Rest of Japan. How To Know Which Skills to Develop at Each Stage of Your Career. A Radical Guide to Spending Less Time on Your Phone.

How the 18th-Century Gay Bar Survived and Thrived in a Deadly Environment. The Pasta Sauce Hailed as the World’s Best Is Surprisingly Easy to Make at Home. This Company Hired Anyone Who Applied. Now It’s Starting a Movement. How to raise kids who will grow into secure, trustworthy adults. Why It Was Easier to Be Skinny in the 1980s. ‘London Bridge Is Down’: The Secret Plan for the Days After the Queen’s Death. The Best Note-Taking Apps. 7 Expert-Approved Ways to Write a Better To-Do List. The Secret History of Paris’s Catacomb Mushrooms. The Case for Being Good Enough. When Teamwork Is Good for Employees — and When It Isn’t. Want more engaged employees? Start optimizing their leisure time.

I Survived the Warsaw Ghetto. Here Are the Lessons I’d Like to Pass On. Leviathans in the Harbor. Why You Should Think Twice Before Getting in a Pool. Break Bad Habits With a Simple Checklist. Are Cities Making Animals Smarter? Want to eat much less meat? Take the top vegan tips from the world’s tastiest cuisines. Billionaire investor Warren Buffett's best advice. How Language Shapes Our Perception of Reality. The 15-Minute Weekly Habit That Eased My Work Anxiety and Made My Boss Trust Me More. Plastics: What’s Recyclable, What Becomes Trash — And Why.