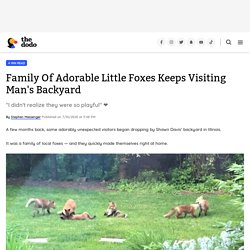 People Are Sharing Photos Of Foxes That Paid Them A Visit (13 Pics) Foxes are fluffy, magnificent animals. 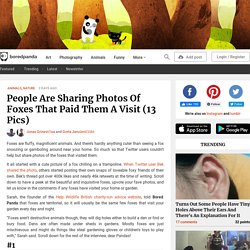 And there’s hardly anything cuter than seeing a fox snoozing or gamboling around near your home. So much so that Twitter users couldn't help but share photos of the foxes that visited them. It all started with a cute picture of a fox chilling on a trampoline. When Twitter user Bek shared the photo, others started posting their own snaps of loveable foxy friends of their own. Bek’s thread got over 400k likes and nearly 46k retweets at the time of writing. Sarah, the founder of the Help Wildlife British charity-run advice website, told Bored Panda that foxes are territorial, so it will usually be the same few foxes that visit your garden every day and night.

“Foxes aren't destructive animals though, they will dig holes either to build a den or find or bury food. Gripping a Plastic Bag, A Massive Fox by Artist Florentijn Hofman Towers Over Rotterdam. BrightVibes. A Fox allows itself to feed Koala Babies in Australia. Arctic Fox Sets Record In Walking From Norway To Canada click 2x. Let These Photos Take You Inside the Life of a Cross Fox. Over the course of two months, photographer Sam Gaby gained the trust of a unique-looking fox in Newfoundland. 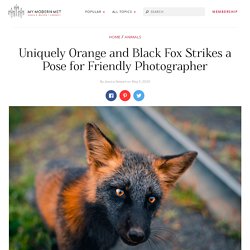 Over time, they built a relationship that allowed the friendly photographer to capture some beautiful photographs of the wild creature in nature. Cross foxes are a fairly common sight to those who live in northern North America, where they're more abundant. As a melanistic variant of the red fox, the beautiful creatures have an orange coat mixed with dark stripes that run down their back and intersect across their shoulders. They make up about 30% of the Canadian red fox population; and though they're more common than a silver fox variant, they're still a special sight to behold. After first spying the fox in 2018, Gaby worked hard to gain the animal's trust. Luckily, Gaby didn't give up and after repeated visits at sunset, the fox began to relax around the photographer and his camera. How Khrushchev’s daughter saved the fox-dogs of Siberia. RT-Images/Thinkstock Reprinted (in modified form) with permission from How to Tame a Fox (and Build a Dog): Visionary Scientists and a Siberian Tale of Jump-Started Evolution, by Lee Alan Dugatkin and Lyudmila Trut, published by the University of Chicago Press. © 2017 by Lee Alan Dugatkin and Lyudmila Trut. 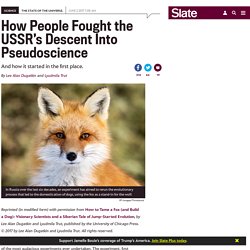 All rights reserved. For the last six decades, Lyudmila Trut and her colleagues have been running one of the most audacious experiments ever undertaken. The experiment, first conceived and led by Trut’s mentor, Dmitry Belyaev, aimed to rerun the evolutionary process that led to the domestication of dogs but in real time, using the fox as a stand-in for the wolf. Each year for the last 58 years they have been testing hundreds of foxes in Siberia and selecting only the tamest of the tame to parent the subsequent generation.

Geneticists at the meeting were forced to stand up and refute their scientific knowledge and practices. He never made good on his threat. Rescued foxes find refuge at Save a Fox in Minnesota. When photographer Robin Schwartz visited Mikayla Raines in Minnesota last July, it was a mystical experience. Raines’ property was surrounded by towering oak trees and waist-high, yellow-tipped grass. The photographer and her human subjects were covered in DEET and polka-dot bites from the swarms of mosquitoes. The heat was so intense that the two people who lived and worked there walked around in their bras, and the bright sun painted them with harsh lighting. “It was like a fantasy world,” Schwartz says. Then, there were the foxes. The animals. Living with a fox 2 clicks.

Worst hunting dog ever (Good dog) Energetic Pet Fox Finds an Unlikely Best Friend in a Gentle Canine. When we first met Juniper, an adorable domesticated fox, she was furiously hopping on a bed thinking it was a pile of snow. 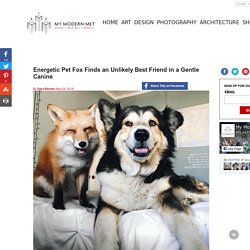 After being won over by her charms, we’ve continued to follow her on Instagram, where her human Jessika shares facets of the lively fox's everyday adventures. One constant in Juniper’s life is Moose, an Australian Shepherd Malamute mix that has become her best friend. Like Juniper, Moose was rescued by Jessika at a very young age. The gentle, smiling canine was introduced to Juniper on her first day home, and they instantly became pals. Now, the two have the type of playful relationship you’d expect from an energetic youngster and more mellow elder.

For Juniper, showing her adoration means that she plants herself on Moose as often as possible. Juniper: Instagram via [Bored Panda, Pleated Jeans] Whats better than a fox cub? right, two fox cubs. Little fox. Russian Miner Takes Photos Of Foxes In The Arctic Circle. Summer is coming.