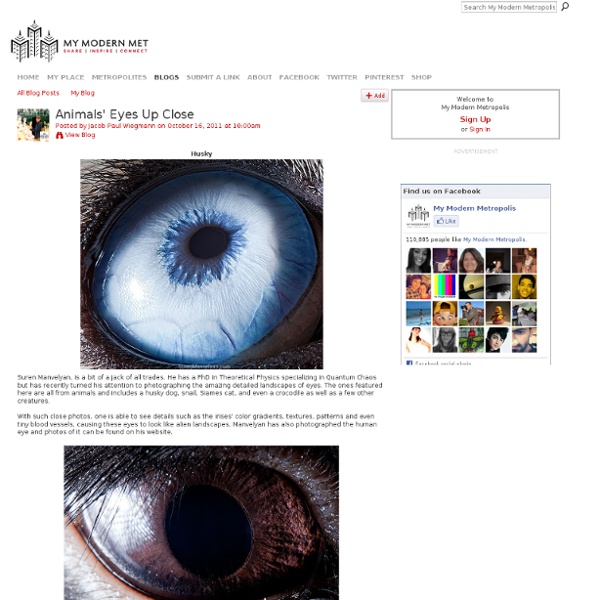 Husky Suren Manvelyan, is a bit of a jack of all trades. He has a PhD in Theoretical Physics specializing in Quantum Chaos but has recently turned his attention to photographing the amazing detailed landscapes of eyes. The ones featured here are all from animals and includes a husky dog, snail, Siames cat, and even a crocodile as well as a few other creatures. With such close photos, one is able to see details such as the irises' color gradients, textures, patterns and even tiny blood vessels, causing these eyes to look like alien landscapes. Manvelyan has also photographed the human eye and photos of it can be found on his website. Black Rabbit Hyena Snail Caiman Nile Crocodile Iguana Siamese Cat Tiger Python Horse Albino Tiger Python Fish Suren Manvelyan's Website via [Lost At E Minor]

Beautiful Photos of Mammals Safely "Co-Sleeping" with Their Babies, As We've Done for Millions of Years The term “co-sleeping” has always seemed strange to me. It implies parents are doing something special or out-of-the-ordinary by doing what mammals have always done for millions of years – sleep with their babies. “Are you going to co-sleep?” people asked when I was pregnant. World Press Photo Of The Year 2010 The World Press Photo Of The Year Contest is one of the most prestigious annual events for press photographers. These are the winners in 2010. Read the descriptions underneath each image to find out more about the setting and the photographer.Warning: Some images are graphic in displaying the horror that can be human life.UPDATE: Check out our World Press Photo Of The Year 2011 edition. 101. Daniele Tamagni, a freelance photographer based in Italy, has won the 2nd Prize in the Arts and Entertainment Stories category with the series The Flying Cholitas in Bolivia: Lucha libre (Bolivian wrestling).

Hedgehog Spines Hold the Secret to Preventing Concussions If you ever find yourself watching hedgehog go about its day, you’ll notice that they tend to fall out of trees — a lot. Wild hedgehogs climb trees as high as 30 feet, looking for insects and food to eat. Sometimes they fall by accident, other times they fall on purpose to evade a predator or because falling is a lot faster than climbing down. mountaintop house in the mist kalabaka greece photo Random photo Submit your photo Stumble Thru landscape photography

25 Most Beautiful Animals Photography on StumbleUpon I think the most beautiful pictures are those made in nature. Nothing compares with the expression of a tiger, the majestic flight of an eagle or the strength of a white bear. Below you can see 25 the most beautiful animal photographs that will capture your attention, and were stumbled on StumbleUpon. Top 20 Real Pictures Made Famous by the Internet - StumbleUpon Pop Culture With the current expansion of Photoshop, it can be difficult to determine if a picture posted online is real or fake. Every year hundreds of photographs become viral on the Internet, and in most cases we have an opinion over their authenticity. This article will examine 20 real pictures that were made famous by the Internet.

Split Family Faces Cousins: Justine, 29, & Ulric, 29 How much do you and your family members really look alike? Quebec, Canada-based graphic designer and photographer Ulric Collette has created a shockingly cool project where he's exploring the genetic similarities between different members of the same family. By splitting their faces in half and then splicing them together, he creates interesting new people that are sometimes quite normal looking and other times far from it. He calls this series Genetic Portraits. (Did you notice that Ulric, the photographer, is one-half of some of these pairings? 22 Animals You Didn't Know Exist We learn all about the common animals when we're young: dogs, cats, cows, horses, elephants, and on and on. But there are dozens of animals out there that you don't know about. Not only do you not know about them, but they're incredibly unique and some are even incredibly adorable. Just take #19 for example. I want one, no matter how illegal that may be. In no particular order, here are 22 of the most unknown animals that we thought you would be interested in.