Why do we believe in electrons, but not in fairies? 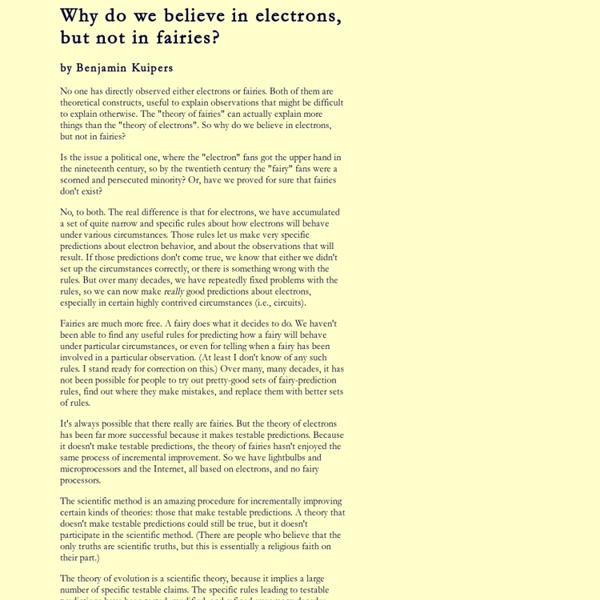 by Benjamin Kuipers No one has directly observed either electrons or fairies. Both of them are theoretical constructs, useful to explain observations that might be difficult to explain otherwise. The "theory of fairies" can actually explain more things than the "theory of electrons". So why do we believe in electrons, but not in fairies? Is the issue a political one, where the "electron" fans got the upper hand in the nineteenth century, so by the twentieth century the "fairy" fans were a scorned and persecuted minority? No, to both. Fairies are much more free. It's always possible that there really are fairies. The scientific method is an amazing procedure for incrementally improving certain kinds of theories: those that make testable predictions. The theory of evolution is a scientific theory, because it implies a large number of specific testable claims. The theory of intelligent design could be true. The scientific method is an enormous intellectual asset to the human race.

Order and Randomness Gary AntonickIf you have just three buttons on your music player, how can you select a specific song for your valentine in the fewest number of steps? (See text for details.) Today is Valentine’s Day, a day when you want to set the romantic mood by choosing the perfect music. 1. For our word puzzle today, let’s introduce the shuffle move into the classical game of word ladders, converting it into something like “word spiral staircases” or “word double helixes.” Try changing PIANO to MUSIC and GRAMMY to OSCARS with the shuffle step allowed. And while we are tinkering with the rules, let’s add another one that will enable us to build ladders between words of different lengths. Here’s wishing everyone a very happy Valentine’s Day.

Malcolm Gladwell Explains How Long It Takes To Become A Genius Level Expert In Your Field In His New Book Outliers - Marketing - The Bold Approach Method I've often quoted an ivy league study that says you need to invest about 1000 hours of practice to develop expert level skill in most any endeavor. As it turns out new research says that may not be true. Malcolm Gladwell's newest book called Outliers looks at the research done in the early 90s, by psychologist K Anders Ericsson and two colleagues. They studied students at Berlin's elite Academy of Music. With the help of the academy's professors, they divided the school's violinists into three groups. Not unsurprisingly everyone from all three groups started practicing about the same time, around age five. So as it turns out, to develop what we would consider genius level ability in certain areas takes about 10,000 hours of dedicated practice. So what does that mean to you if you want to totally reinvent yourself and become a recognized expert?

This Will Mindfuck You: The Double-Slit Experiment The video below shows scientific proof that there is something NOT quite logical or scientific about this universe. The mere act of observation can completely change the outcome of an event! Before I get too ahead of myself, you need to watch the video below to understand: (Forgive the corny cartoon character explaining the concept — at least he knows his stuff) Recap: When a camera observed the electrons, they acted as particles. So what’s the reason for this? Want even further proof? Then in 2002, a group of researchers set up the experiment in a way that the electron could not possibly receive information about the existence of an observing instrument. Here’s the kicker: The insertion of the interferometer took only 40 nanoseconds (ns) while it would take 160 ns for the information about the configuration to travel from the interferometer to reach the photon before it entered the slits. The Results: The photons acted like particles 93% of the time that they were observed. 1. 2. 3.

Revenge of the Introvert There are as many introverts as extraverts, but you'd never know it by looking around. Introverts would rather be entertained by what's going on in their heads than in seeking happiness. Their big challenge is not to feel like outsiders in their own culture. by Laurie Helgoe, Ph.D. After ten years as a psychologist practicing psychodynamic psychotherapy , I reclined on the couch of my own analyst feeling burdened by my chosen work. Then I heard myself say: "I don't like being a therapist." Suddenly I felt free, loosed from expectations that never fit. As a card-carrying introvert , I am one of the many people whose personality confers on them a preference for the inner world of their own mind rather than the outer world of sociability. Over the past two decades, scientists have whittled down to five those clusters of cognitions, emotions, motivations, and behaviors that we mean by "personality" factors. Although there is no precise dividing line, there are plenty of introverts around.

Cornell Fabrication Lab Makes Edible Objects With 3-D Printer Here at PopSci we often write about emerging technologies like 3-D printing, perhaps almost as often as we write about space launches and rocket ships. And every now and then the use of high-tech gadgetry in the kitchen gives us reason to write about things like scallops and cheese. But until Cornell University teamed up with Dave Arnold and New York's French Culinary Institute to create miniature scallop-and-cheese space shuttles using a specially equipped 3-D printer, we never thought we'd ever write about all three at the same time. Cornell's computational synthesis lab has created software tools that allow engineers to create edible objects using complex geometries that even a skilled chef would have a great deal of trouble creating by hand. So far the team has printed with all kinds of ingredients: cheese, chocolate, hummus, turkey, celery, scallops, etc.

500themes: The Dragon Updated 6/12/2011. Note: If you spot any duplicates, please let me know. Note-2: I've changed the number of "You pick!" prompts from five to ten! Enjoy! Helios 1. 51. 101. 151. 201. 251. 301. 351. 401. 451. Dragon Code 1. Why some scientists think reality might be a hologram Have you ever wished that your life was actually a hologram, like Keanu Reeves’s in the The Matrix? Craig Hogan, a particle astrophysicist at the University of Chicago and Fermilab (dedicated to the study of the science of matter, space and time), is testing an interesting theory: whether our world is really two-dimensional and only appears three-dimensional, like a hologram on a credit card. “There are a lot of mathematical ideas about how reality works, but we need experiments to guide us about what is really happening,” says Hogan in an interview with the Star. Hogan is heading a team of researchers trying to test what has become known as the holographic theory. Based on mathematical formulas and the study of black holes and string physics, some physicists have hypothesized that reality is a hologram. “It is as if we’re virtual human beings living on a two-dimensional world,” he said. “We just don’t understand the coding for it,” adds Hogan. Asked how he explains his work, he laughs.

Political Myths WE Live By by Peter Lach-newinsky Whenever most conversations I have these days move around to matters political I often find myself in a quandary. I have the choice of either accepting the tacit assumptions behind the other person’s remarks or questions, or else remaining largely silent and trying to change the topic. This is because I don’t share the tacit assumptions. I would classify most of these usually unexamined assumptions as social democratic or liberal. They dominate all corporate media for reasons that will become obvious below. 1. If ‘democracy’ means ‘rule by the people’, it isn’t. 2. Just like any communist party, when it comes to the crunch, the major parties are all run top-down from head office. 3. This reduces the core political notion of freedom to the freedom to choose between the two wings of the one pro-capitalist and neo-liberal party. The key investment decisions are not made by politicians and thus elections are only of secondary importance. 4. 5. 6. 7. 8. It isn’t. 9. 10. 11. 12. 13. 14. 15.