One. Going, Going, Almost Gone: A Worm Verges On Extinction : Goats and Soda.

Plastics Don't Disappear, But They Do End Up In Seabirds' Bellies. Hide captionA dead young albatross on the Midway Atoll in the Pacific Ocean. 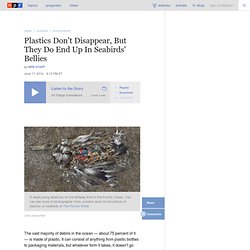 You can see more of photographer Chris Jordan's work on the effects of plastics on seabirds at The Picture Show. Chris Jordan/Flickr A dead young albatross on the Midway Atoll in the Pacific Ocean. Milk Marketing Board destroying milk produced at Chilliwack farm. Andreas Kay’s unbelievable grasshopper photos. ... - Radiolab. Introducing A Divorce Rate For Birds, And Guess Which Bird Never, Ever Divorc... The 25 Cutest Baby Animal Species of All Time. Olinguito, New Mammal Species, Announced By Smithsonian Researchers (PHOTOS) WASHINGTON — Imagine a mini-raccoon with a teddy bear face that is so cute it's hard to resist, let alone overlook. 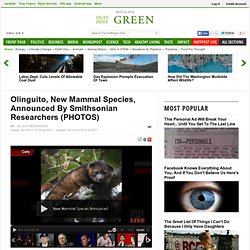 But somehow science did – until now. Researchers announced Thursday a rare discovery of a new species of mammal called the olinguito. True Facts About The Mantis Shrimp. First Animal to Survive in Space. Defining Life: The Virus. Biology 1032005 First PaperOn Serendip Zachary Grunau The definition of "life," it seems, must remain ambiguous. 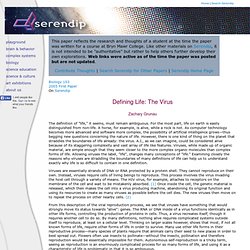 For the most part, life on earth is easily distinguished from non-life. A horse, for example, is alive, while a rock is not. As computer technology becomes more advanced and software more complex, the possibility of artificial intelligence grows—thus begging new questions concerning the nature of life. Viruses are essentially strands of DNA or RNA protected by a protein shell. From this description of the viral reproduction process, we see that viruses have something that would strongly move its status towards "alive": genes. Viruses are simple in construction—however, their interaction with more structurally complex organisms is anything but. -‿- Why the mantis shrimp is my new favorite animal. The Photo Ark - Joel Sartore. Underwater Creepy Creature Found! (Cascade Creature) 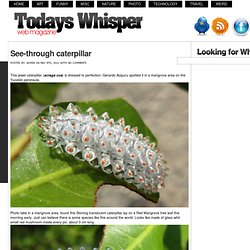 Gerardo Aizpuru spotted it in a mangrove area on the Yucatán peninsula. Photo take in a mangrove area, found this Stoning translucent caterpillar lay on a Red Mangrove tree leaf this morning early. Just can believe there is some species like this around the world. Snails. Arthropods. One more 7000 FPS lady bug. See-Through Frog, Other "Lost" Species Found. What we found on the Dog II. Spider Mite's Secrets Revealed. Tiny pest's genome opens door to novel approaches to crop protection and silk production The tiny two-spotted spider mite (Tetranychus urticae) causes much anxiety for farmers, and has been, to date, a scientific mystery. 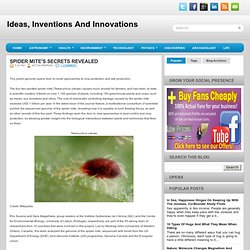 It feeds on over 1,100 species of plants, including 150 greenhouse plants and crops, such as maize, soy, tomatoes and citrus. The cost of chemically controlling damage caused by the spider mite exceeds USD 1 billion per year. A creature that gains control of the ant's brain and movement. Jewel-like or see-through caterpillars are amazing gifts from mother nature. Here's photos of the Jewel Caterpillar (Acraga coa), snapped by photographer Gerardo Aizpuru near Cancun, and submitted to Project Noah. 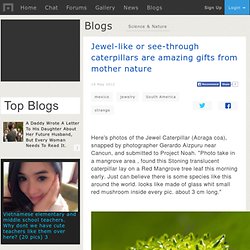 "Photo take in a mangrove area , found this Stoning translucent caterpillar lay on a Red Mangrove tree leaf this morning early. Just can believe there is some species like this around the world. looks like made of glass whit small red mushroom inside every pic. about 3 cm long. " ▲▼ Cute animals. 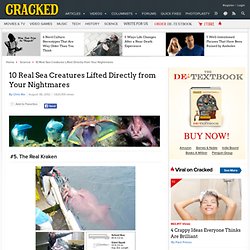 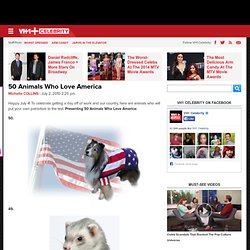 To celebrate getting a day off of work and our country, here are animals who will put your own patriotism to the test. Presenting 50 Animals Who Love America: Www.robertashdown.com/blog/ Lake Nuga Nuga, the largest natural water body within the dry highlands of the Central Queensland Sandstone Belt, is a place of many stories. 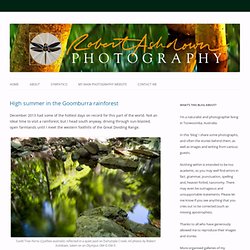 About 515 km north-west of Brisbane, this lake is located at the northern (downstream) end of the Arcadia Valley, and lies within the floodplain of the Brown River, a tributary of the Comet River. The Comet River itself falls within the greater Fitzroy River basin (see map below), the waters from which eventually reach the Queensland coast near Rockhampton. During favourable seasons both the Brown River and Moolayember Creek flow into Lake Nuga Nuga. Standing dead trees in Lake Nuga Nuga are illuminated by campfire in a three-hour exposure (taken on on slide film).

All photographs in this post by Robert Ashdown unless credited otherwise. Lake Nuga Nuga varies in size with the seasons. Nuga Nuga National Park lies adjacent to the lake’s northern banks, but does not include the lake itself. Looking east over Lake Nuga Nuga toward the Expedition Range. Whales Surprise Surfer Near Santa Cruz, California Beach (VIDEO)

Girls Judge Boys in Desert Sex Factor - Human Planet: Deserts, Life in the Furnace Preview - BBC One. Why do we believe in electrons, but not in fairies? By Benjamin Kuipers No one has directly observed either electrons or fairies. 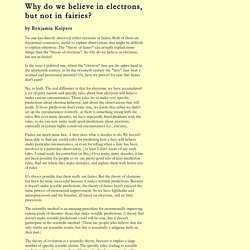 Both of them are theoretical constructs, useful to explain observations that might be difficult to explain otherwise. The "theory of fairies" can actually explain more things than the "theory of electrons". Brain. Biology.

Related:  Why the mantis shrimp is my new favorite animal   -  Why do we believe in electrons, but not in fairies?   -  Education   -  Enterprise