LPS essay Mac Ruairi Brouwers. Language and social class. Hurtful Words Damage the Brain. FORMS OF ABUSE. Domestic violence is any of the forms of abuse listed below. 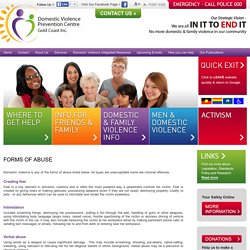 All types are unacceptable some are criminal offences. Creating fear Fear is a key element in domestic violence and is often the most powerful way a perpetrator controls his victim. Fear is created by giving looks or making gestures, possessing weapons (even if they are not used), destroying property, cruelty to pets - or any behaviour which can be used to intimidate and render the victim powerless. Intimidation Includes smashing things, destroying her possessions, putting a fist through the wall, handling of guns or other weapons, using intimidating body language (angry looks, raised voice), hostile questioning of the victim or reckless driving of vehicle with the victim in the car. Verbal abuse Using words as a weapon to cause significant damage. Physical abuse Behaviour such as pushing, shoving, hitting, slapping, attempted strangulation, hair-pulling, punching etc. and may or may not involve the use of weapons. 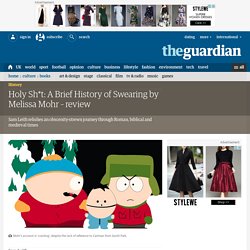 It stiffens the sinews and summons up the blood, and not just metaphorically. Obscenities actually do act on us physiologically. Swearing increases electrical conductance across the skin, pushes the heart rate higher and measurably increases resistance to pain. Obscenities are also linguistically interesting in themselves: the more currency they have, the more their emotional colouring and the associations they trigger overwhelms what they actually mean.

"Fucking", these days, only rarely means "having sex". Swearing doesn't just mean what we now understand by "dirty words".

Judi Dench expletives. Pragmaticsofswearing. Why the #$%! Do We Swear? For Pain Relief. Bad language could be good for you, a new study shows. 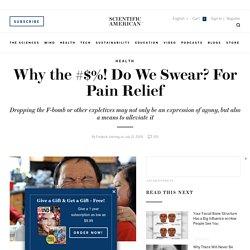 For the first time, psychologists have found that swearing may serve an important function in relieving pain. The study, published today in the journal NeuroReport, measured how long college students could keep their hands immersed in cold water. During the chilly exercise, they could repeat an expletive of their choice or chant a neutral word. When swearing, the 67 student volunteers reported less pain and on average endured about 40 seconds longer. Although cursing is notoriously decried in the public debate, researchers are now beginning to question the idea that the phenomenon is all bad. How swearing achieves its physical effects is unclear, but the researchers speculate that brain circuitry linked to emotion is involved.

Culture - Why do Brits and Americans swear so differently? Warning: This article contains very strong language that may offend some readers. 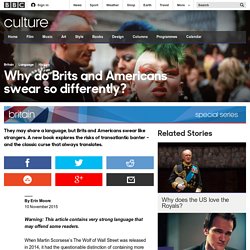 When Martin Scorsese’s The Wolf of Wall Street was released in 2014, it had the questionable distinction of containing more F-bombs than any other drama — 2.83 per minute, a total of 506. Only a documentary about the word itself exceeds it in cinematic history, with 857 instances. But this is far from unusual for American films, in which profane words frequently number in the hundreds. Television tends to have stricter standards. Back in 1972, the comedian George Carlin released an album including a monologue called Seven Words You Can Never Say on Television. The influence of American films and television on British culture is strong. For example, Americans consider it a big deal when a public figure is caught swearing. Swearing is emotional and creative language say researchers who claim it is GOOD for you. Theory presented to British Psychological Society conference in BirminghamParticipants played aggressive video game and held ice-cold glass of waterDr Richard Stephens of Keele University added it explains why we swear'We want to use more taboo words when we're emotional', he said By Dan Bloom Published: 14:55 GMT, 11 May 2014 | Updated: 09:56 GMT, 12 May 2014 Scroll down for an audio interview Swearing is a harmless emotional release which could make you feel stronger, researchers have claimed - though only in moderation. 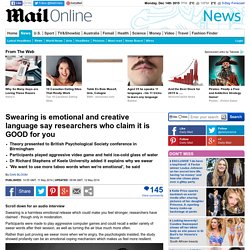 Participants were made to play aggressive computer games and could recall a wider variety of swear words after their session, as well as turning the air blue much more often. The Science of Swearing: A look into the human MIND and other less socially acceptable four-letter words. By Michelle Drews Disclaimer: This article covers the psychological, neurobiological, linguistic, and legal aspects of the use of profanity. 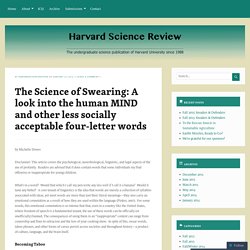 Readers are advised that it does contain words that some individuals my find offensive or inappropriate for young children. What’s in a word? Research demonstrates how the use of bad language can alter our behaviour. I have a friend who can't say "fuck". 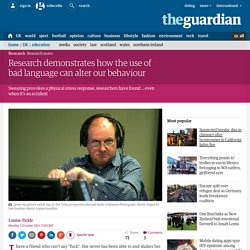 She never has been able to and shakes her head helplessly when teased and dared to give it a go. She's not a prude. But she has such a strong reaction to the word that she cannot bring herself to utter it. Using the f-word in the first sentence of this article wasn't done for gratuitous effect. Recalling taboo terms. The Utility and Ubiquity of Taboo Words. Why Are Bad Words Bad?