Invisible Blue: The Color That Ancient People Could Not See. We have all been told to be ‘careful what we wish for’ or that we ‘only see what we look for’ and maybe some of you have had past partners who claimed that you ‘took them for granted and made them invisible’. 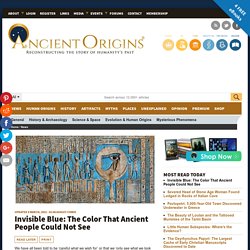 The most conservative of us might deem these types of phrases as subjective and belonging to self-help books, but when we look back in to history evidence confirms that humans are fully capable of making physical appearances invisible if we do not concentrate on them, even something as fundamental to reality as a color. The color blue in particular… How To Shift Your Perception Of The World. We are having a New Moon in Libra on October 16th throughout most of the world and in the morning of the 17th in the East. 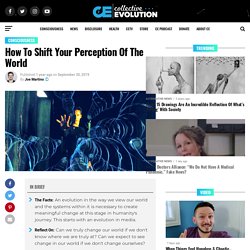 This is initiating a 29.5 day lunar cycle and new wave of energy for the coming month; however, the astrological configurations mentioned in this article will be more prominent over the following two weeks. This cycle will include a Full Moon in Taurus on October 31st/November 1st. This New Moon occurs days after we have reached the halfway point of Mars’ retrograde in Aries which concludes mid-November. It is also days after Mercury began its retrograde which is currently in Scorpio and moving backwards into Libra before it moves forward again post November 3rd. Aluna. (5) Facebook. Being open-minded literally changes the way you see the world. Psychologists have only begun to unravel the concept of “personality,” that all-important but nebulous feature of individual identity. 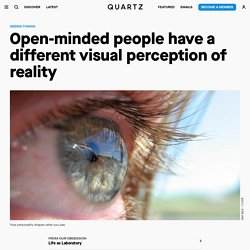 Recent studies suggest that personality traits don’t simply affect your outlook on life, but the way you perceive reality. One study published earlier this year in the Journal of Research in Personality goes so far as to suggest that openness to experience changes what people see in the world. It makes them more likely to experience certain visual perceptions. In the study, researchers from the University of Melbourne in Australia recruited 123 volunteers and gave them the big five personality test, which measures extroversion, agreeableness, conscientiousness, neuroticism, and openness to experience. That last personality trait involves creativity, imagination, and a willingness to try new things. 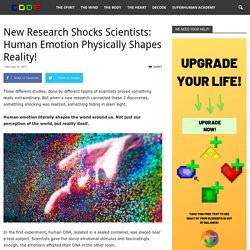 But when a new research connected these 3 discoveries, something shocking was realized, something hiding in plain sight. Human emotion literally shapes the world around us. Not just our perception of the world, but reality itself. In the first experiment, human DNA, isolated in a sealed container, was placed near a test subject. Scientists gave the donor emotional stimulus and fascinatingly enough, the emotions affected their DNA in the other room. Heart Based Consciousness: Using The Heart As An Organ Of Perception. The Facts:Psychedelics can be a useful tool in helping people to work through a number of serious challenges like addiction and extreme trauma. 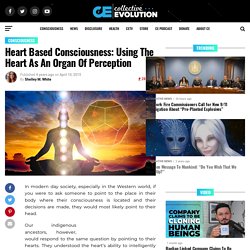 These practices are best done guided and with expertise involved.Reflect On:Is the popularization of psychedelics marginalize what they can do? Do psychedelics actually change you? Or do they show you what you need to change about yourself? This may be controversial in some perceptions, but authentic truth is so important to me that I had to share this for deeper reflection.

It’s especially important in a time where psychedelic substances like mushrooms, ayahuasca, peyote and so forth are becoming quite popular. Earth - Why there could be many identical copies of you. This story is nominated for a Webby Award for Best Film & Video. 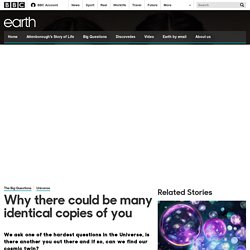 Vote here. BBC Earth is also nominated for a Webby, for Best Science Website. Vote here. Tre anledningar till att tiden inte finns. Our Imagination Really Can Change Our Perceptions of Reality on a Neural Level. As Above So Below:  What Can Other Or Higher “Dimensions” Really Mean? Are we living in a simulated universe? Here's what scientists say. What if everything around us — the people, the stars overhead, the ground beneath our feet, even our bodies and minds — were an elaborate illusion? 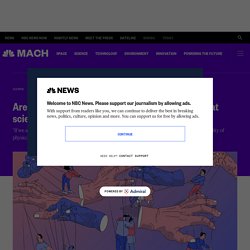 "A human being is a part of the whol… Could consciousness all come down to the way things vibrate? Why is my awareness here, while yours is over there? 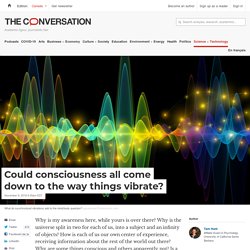 Physicists Examine The Structure Of Time: Reality Could Be An Illusion & ‘Time’ Might Not Exist. Time: it’s no doubt a confusing topic, and it gets even more confusing the more we try to unearth its secrets. 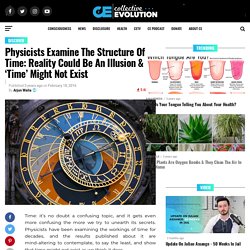 Physicists have been examining the workings of time for decades, and the results published about it are mind-altering to contemplate, to say the least, and show that time might not exist as we think it does. A new paper titled “Time crystals from minimum time uncertainty” that was recently revised and re-published in The European Physical Journal marks just one example of the astonishing research being conducted on this subject.

In it, the researchers have proposed that the shortest physically meaningful length of time might really be multiple orders of magnitude longer than Planck time. Planck time refers to the time required for light to travel, in a vacuum, which would be a distance of 1 Planck length. The unit is named after Max Planck, who was the first to propose the theory. No experiment has ever come close to examining Planck time directly because it is so short.

The science of “vibes” shows how everything is connected. Sometimes a person, creature, or thing really resonates with you. 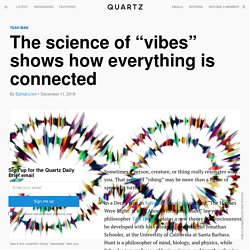 That sense of “vibing” may be more than a figure of speech, it turns out. In a Dec. 5 post in Scientific American entitled “The Hippies Were Right: It’s All About Vibrations, Man!” Lawyer and philosopher Tam Hunt explains a new theory of consciousness he developed with his colleague, psychologist Jonathan Schooler, at the University of California at Santa Barbara. Hunt is a philosopher of mind, biology, and physics, while Schooler is a professor of brain science, and together they’ve been working on answering one of the world’s most perplexing questions: “What physical processes underpin mental experience, linking mind and matter and creating the sense of self?”

In other words, what natural laws govern our perception of existence?

Army Remote Viewer Peers Into The Origins of Humanity To Find Out If Humans Were Created. The Facts:A few years ago researchers discovered that memory can be transferred between, in this case, snails. The research changed the standard theory of memory and thoughts about how the brain remembers.Reflect On:How much do we have yet to discover? Are we even physical beings? Could memories be stored beyond the physical world or what we can perceive with our senses? Can our we change our biology with our thoughts, feelings and emotions? Make sure you follow Collective Evolution on Telegram as we have no idea how much longer we will be on Facebook. Animal testing is extremely heartbreaking. Stephen Ellcock - 'Subject, Verb, Object.' , from... Science And Sense In A Post-Truth World: How Do We Know? The illusion of reality: The scientific proof everything is energy and reality isn't real. Anonymous Sends Another Strong Message: “This Is Unlike Anything We Have Ever Seen”

Physicists find we’re not living in a computer simulation. Just in case it’s been weighing on your mind, you can relax now. A team of theoretical physicists from Oxford University in the UK has shown that life and reality cannot be merely simulations generated by a massive extraterrestrial computer. Neuroscientist Shares How Your Brain Hallucinates To Create Reality – Collective Evolution. RSA Animate - The Secret Powers of Time. New Study Reveals Evidence We Live in a ‘Holographic Universe’ – Collective Evolution.

About SYS — Madeline Schwartzman. See Yourself Sensing: Redefining Human Perception is an explosive and timely survey that explores the relationship between design, the body, technology and the senses over the last fifty years. Get ready to say goodbye to unconscious sensing and embrace cyborgs, post-humans, mediated reality and all manner of cutting edge sensory interventions like seeing with your tongue or plugging your nervous system directly into a computer.

Astounding experiments with interaction design, cybernetics, neuroscience and art illustrate how we see and sense, and how artistic interpretation can undermine our fundamental perception of the world and ourselves. The book presents the work of key practitioners in this field, from Rebecca Horn's mythical wearable structures and Stelarc's robotic body extensions, to Carsten Höllers' neurally interactive sculptures, as well as the work of artists who have emerged in the last five years, like Internet sensation Daito Manabe, Hyungkoo Lee and Michael Burton. About SYX — Madeline Schwartzman. See Yourself X: Human Futures Expanded (SYX) is the second volume of Madeline Schwartzman’s timely series that looks at human perception and the sensory apparatus. See Yourself Sensing: Redefining Human Perception (2011)—the first of the series—is a collection of fifty years of futuristic proposals for the body and the senses.

See Yourself X focuses in on our fundamental perceptual domain—the human head—presenting an array of conceptual and constructed ideas for extending ourselves physically into space. What will be the physical future of the head and the sensory apparatus in fifty years time, as the mechanisms for how we communicate and sense change, and become obsolete, prompted by the advancement of brain-to-brain communication? The Psychology of Time and the Paradox of How Impulsivity and Self-Control Mediate Our Capacity for Presence.

“Reality is never and nowhere more accessible than in the immediate moment of one’s own life,” Kafka once told a teenage friend. “It’s only there that it can be won or lost.” Time Might Only Exist in Your Head. And Everyone Else’s. Past. Present. Future. In physics, they are all the same thing. The Power of Words: How Words Affect Your Energy. Image credit: flickr.com/photos/21546823@N02/2475149596 Words are not just elements of speech or writing, because they can be used to affect how energy travel through space. When spoken out loud, words transform into vibrations that can be used to direct energy. This is one of the first steps to creating magic effects.

9 Mind-Bending Epiphanies That Turned My World Upside-Down. Mind Over Matter: Princeton & Russian Scientist Reveal The Secrets of Human Aura & Intentions – The Mind Unleashed. A Russian scientist has been studying the human energy field and is claiming that people can change the world simply by using their own energy. Alisa Miller: How the news distorts our worldview. Scientists: Earth Endangered by New Strain of Fact-Resistant Humans. MINNEAPOLIS (The Borowitz Report)—Scientists have discovered a powerful new strain of fact-resistant humans who are threatening the ability of Earth to sustain life, a sobering new study reports. The research, conducted by the University of Minnesota, identifies a virulent strain of humans who are virtually immune to any form of verifiable knowledge, leaving scientists at a loss as to how to combat them. “These humans appear to have all the faculties necessary to receive and process information,” Davis Logsdon, one of the scientists who contributed to the study, said.

As Above So Below:  What Can Other Or Higher “Dimensions” Really Mean? – Collective Evolution.