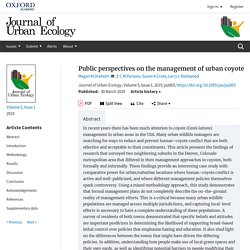 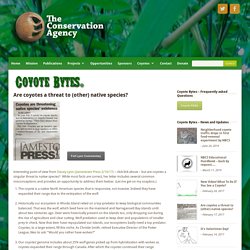 While most facts are correct, her letter includes several common misconceptions and provides an opportunity to address them below: (Let me get on my soapbox.) The coyote is a native North American species that is responsive, not invasive. Indeed they have expanded their range due to the extirpation of the wolf.Historically our ecosystem in Rhode Island relied on a top predator to keep biological communities balanced. That was the wolf, which lived here on the mainland and Narragansett Bay islands until about two centuries ago. Deer were historically present on the islands too, only dropping out during the rise of agriculture and clear cutting. About Jonathan Way Jonathan (Jon) Way has a B.S. 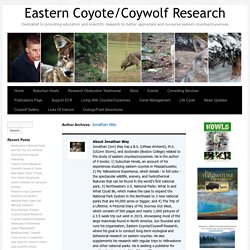 (UMass Amherst), M.S. (UConn Storrs), and doctorate (Boston College) related to the study of eastern coyotes/coywolves. He is the author of 4 books: 1) Suburban Howls, an account of his experiences studying eastern coyotes in Massachusetts; 2) My Yellowstone Experience, which details - in full color - the spectacular wildlife, scenery, and hydrothermal features that can be found in the world's first national park; 3) Northeastern U.S. National Parks: What Is and What Could Be, which makes the case to expand the National Park System in the Northeast to 3 new national parks that are 44,000 acres or bigger; and 4) The Trip of a Lifetime: A Pictorial Diary of My Journey Out West, which consists of 560 pages and nearly 1,000 pictures of a 3.5 week trip out west in 2019, showcasing most of the large mammals found in North America.

Using Coyotes to Protect Livestock. Wait. What? Livestock losses are an unfortunate reality of ranching and the use of traps and snares is a common way to attempt to reduce predator-livestock conflict. 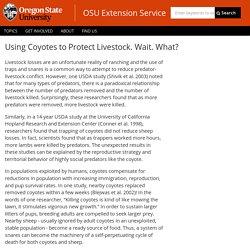 However, one USDA study (Shivik et al. 2003) noted that for many types of predators, there is a paradoxical relationship between the number of predators removed and the number of livestock killed. Surprisingly, these researchers found that as more predators were removed, more livestock were killed. Similarly, in a 14-year USDA study at the University of California Hopland Research and Extension Center (Conner et al. 1998), researchers found that trapping of coyotes did not reduce sheep losses. Coyotes live in almost all US cities. Here’s how to avoid trouble with them. Humans are becoming an increasingly urban species and, across the United States, so are coyotes. 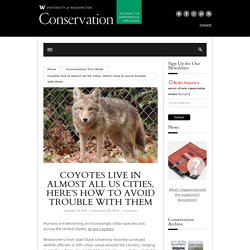 Researchers from Utah State University recently surveyed wildlife officials in 105 urban areas around the country, ranging in size from from about 100,000 residents on up to New York City with over 18 million. They found that 96 of the cities, or 91 percent, are home to coyotes. Fox_CoyotePopulationsReport. The Natural History of the Urban Coyote.

Pupping Season: What Behaviors to Expect If You Have A Dog, and What You Can Do. Coyote pupping season is in full swing, which is obvious from coyote behaviors I’m now observing in our parks. 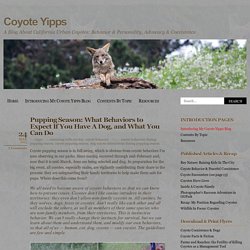 Since mating occurred through mid-February and, now that it is mid-March, dens are being selected and dug. In preparation for the big event, all coyotes, especially males, are vigilantly contributing their share to the process: they are safeguarding their family territories to help make them safe for pups. Oliver Starr sur Twitter : "#Hunters show UR kids these pictures, C if they think U should still kill #coyotes. Coyote finds old dog toy, acts like a puppy. Photographer Pamela Underhill Karaz lives in Trenton Falls, New York, in a rural area. 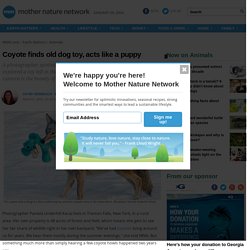 Her own property is 48 acres of forest and field, which means she gets to see her fair share of wildlife right in her own backyard. "We've had coyotes living around us for years. We hear them mostly during the summer evenings," she told MNN. But something much more than simply hearing a few coyote howls happened two years ago. She tells us, "Our driveway is a quarter-mile long and lined with 45-year-old balsam trees. Then that's when the magic happened. Coyote Management Guidelines. UC IPM Home > Homes, Gardens, Landscapes, and Turf > Coyote Some coyotes have adapted to life in residential neighborhoods, parks, and open spaces. 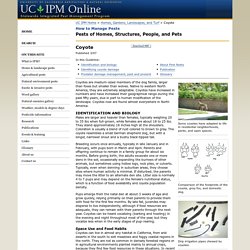 Coyote Love Is Forever. Beyond the ferocious jaws of the carnivorous coyote is a loving creature that scientists say is 100 percent monogamous. 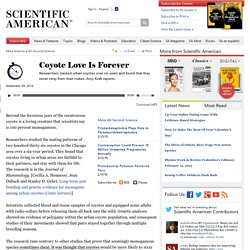 Scientists collected blood and tissue samples of coyotes and equipped some adults with radio-collars before releasing them all back into the wild. Genetic analyses showed no evidence of polygamy within the urban coyote population, and consequent studies of their movements showed that pairs stayed together through multiple breeding seasons. The research runs contrary to other studies that prove that seemingly monogamous species sometimes cheat. It was thought that coyotes would be more likely to stray from a mate in an urban environment where food and females are plentiful. Instead, the research provides evidence that not all species of canids are dirty dogs. Foxdenver. Coyote-killing-infographic.jpg (JPEG Image, 932 × 543 pixels) Why Killing Coyotes Doesn't Work. July 26, 2013 Trapping and killing won't stop conflicts with coyotes Adapted from the book Wild Neighbors Leg-hold traps are not only cruel and inhumane for coyotes, but may also injure other wildlife, pets, or even children. 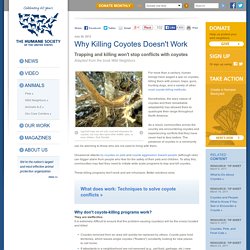 Dick Randall Click the image for the full-sized infographic. Viewcontent. Viewcontent. Coyotes and People: What to Know If You See or Encounter a Coyote. The Rise of the Mesopredator. Abstract Apex predators have experienced catastrophic declines throughout the world as a result of human persecution and habitat loss. These collapses in top predator populations are commonly associated with dramatic increases in the abundance of smaller predators. Known as “mesopredator release,” this trophic interaction has been recorded across a range of communities and ecosystems.

I recently chatted with Roland Kays, an expert on eastern coyotes, who serves the biodiversity director at the North Carolina Museum of Natural Sciences, to find out more about this interesting mammal. Coyotes are common on Camp Lejeune and elsewhere across the eastern United States, even though they are not native to this part of the country. Only in the 1980s did coyotes begin to invade North Carolina. Several factors allowed coyotes to spread from west to east. A major factor behind the successful expansion of coyotes corresponds to the ecological vacuum left behind after people eradicated wolves across the country. "Hybrid vigor" is another factor that promoted coyote invasion into the eastern United States. Although it is not likely as significant as hybrid vigor or the absence of wolves, massive deforestation of the United States also contributed to the eastward spread of coyotes.

Coyotes. Oliver Starr - The shameful end result of #Salmon #Idaho's. Coyotes are one of the most monogamous mammals on the planet, never straying, staying loyal to one partner over the course of it's lifetime..........One o. Coyotes living in cities don't ever stray from their mates, and stay with each other till death do them part, according to a new study.

The finding sheds light on why the North American cousin of the dog and wolf, which is originally native to deserts and plains, is thriving today in urban areas. 6,000 coyotes killed in Utah’s bounty program. SALT LAKE CITY — More than 6,000 dead coyotes have been redeemed by hunters since Utah’s Division of Wildlife Resources launched its coyote bounty program last September. The DWR hopes its ambitious plan will eliminate a significant portion of the state’s coyote population, which in turn will benefit the deer herds on which they prey. Officially known as the Predator Control Program, the incentive-based program pays hunters $50 for every coyote they kill. Other states have implemented bounty programs over the years, but rarely on this scale. Even the New York Times has taken note of Utah’s Predator Control Program, calling it “one of the nation’s largest hunter-based efforts to manage predatory wildlife.”

John Shivik, mammals coordinator for the Division of Wildlife Resources, is proud of how his team worked together to start the Predator Control Program from scratch and get it “up and running so quickly.” Dr. Grant Olsen joined the ksl.com team in 2012. 6,000 coyotes killed in Utah’s bounty program. SALT LAKE CITY — More than 6,000 dead coyotes have been redeemed by hunters since Utah’s Division of Wildlife Resources launched its coyote bounty program last September.

The DWR hopes its ambitious plan will eliminate a significant portion of the state’s coyote population, which in turn will benefit the deer herds on which they prey. Officially known as the Predator Control Program, the incentive-based program pays hunters $50 for every coyote they kill. Other states have implemented bounty programs over the years, but rarely on this scale. Mystery of the CoyWolf Part2. Mystery of the CoyWolf Part1. Dedicated to providing education and scientific research to better protect and conserve eastern coyotes/coywolves. Www.humanesociety.org/assets/pdfs/wild_neighbors/coyote_hazing.pdf. Living in Coyote Country (and a campaign to stop a hunt) As mentioned in a previous post, we’ve seen some coyotes in our Southern California residential area recently. Wiley the coyote: A Wisconsin hunter’s story of love and transformation. The Daily Coyote. In City Where Dogs Outnumber Children, Finding a Way for Coyotes to Coexist. SAN FRANCISCO — Almost all creatures, great and small, are welcome in the city of St.

San Francisco: Coyote Warning in Golden Gate Park, Leash Dogs. (ANIMAL NEWS) In San Francisco, there is an estimated one coyote per 80,500 people. Yet people living around Golden Gate Park are concerned about the coyotes living in there, some reporting that the animals have attacked their pets. Coyotes roaming around North Albuquerque Acres. Project Coyote.