Demonizing Wolves. September 19, 2015 Here we go again, a wolf supposedly killed a cow in Washington state, on federal land and it makes headlines but what the media never reports is how well-behaved wolves are and what a non-threat they are to ranching or farming. 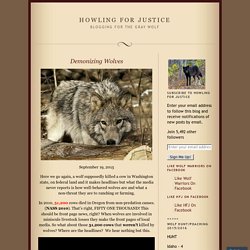 Reader Comment: Killing Wolves, Without Reason. It is known, and not refuted by anyone from the governor through the state Legislature, that the latest bill to slaughter 60 percent of the wolves is bought but not paid for by the National Rifle Association. 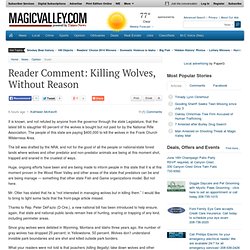 The people of this state are paying $400,000 to kill the wolves in the Frank Church Wilderness Area. The bill was drafted by the NRA, and not for the good of all the people or national/state forest lands where wolves and other predator and non-predator animals are being at this moment shot, trapped and snared in the cruelest of ways. Huge, ongoing efforts have been and are being made to inform people in this state that it is at this moment proven in the Wood River Valley and other areas of the state that predators can be and are being manage — something that other state Fish and Game organizations model. But not here. Mr. Thanks to Rep. What your readers were not told is that poachers (killing illegally) take down wolves and other wildlife. Hunting today is indiscriminate. Bold Visions Conservation Blog. Why the states have wolf management wrong - National wildlife conservation. In this Powell Tribune post, Wolf hunt ends with 24 taken, written by Gib Mathers, the big, glaring error in state wolf management is revealed.

The states, eager for revenue (gotten through the selling of hunting and trapping licenses), have gotten basic principles of wolf 'management' all wrong. With wolves, 'management' is not as simple as removing individual bucks from a breeding population of deer - Wolves live in FAMILIES. Everything they do revolves around the well-being of their families - Including teaching their pups (who stay 'children', to be taught and protected, for three years), just as we teach our own children. Wolves pass down learned information (for instance, to stay away from livestock) to their family, to their impressionable pups, in essence passing down a unique 'culture' of conduct and survival tools specific to each pack. 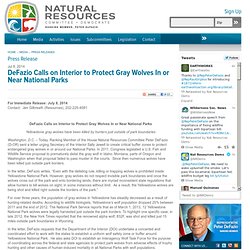 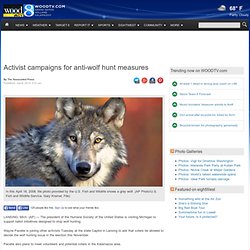 (AP) — The president of the Humane Society of the United States is visiting Michigan to support ballot initiatives designed to stop wolf hunting. Wayne Pacelle is joining other activists Tuesday at the state Capitol in Lansing to ask that voters be allowed to decide the wolf hunting issue in the election this November. Pacelle also plans to meet volunteers and potential voters in the Kalamazoo area.

Hunting opponents have gathered enough petition signatures to force two statewide referendums on whether to repeal laws that could allow wolf hunting. But hunting supporters have collected their own signatures in favor of letting the appointed Natural Resources Commission make the decision. Oliver Starr's Speak for Wolves talk. Scientists use CSI-ish tests to count Alaska packs. Thanks for a great event! Dear Wolf Advocate, In late June, approximately 150 people attended Speak for Wolves: Yellowstone 2014 in Gardiner, Montana. 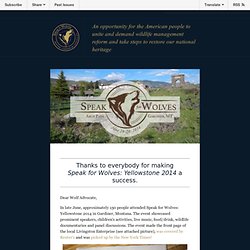 The event showcased prominent speakers, children's activities, live music, food/drink, wildlife documentaries and panel discussions. The event made the front page of the local Livingston Enterprise (see attached picture), was covered by Reuter's and was picked up by the New York Times! Friday night was kicked off by local resident and cinema photographer Bob Landis, who screened his newest film SheWolf, which has appeared on the National Geographic Channel. Another Wolf/Coyote Killing Contest Being Planned for January in Salmon, Idaho. The BLM has issued a “scoping letter” asking people to provide comments on the scope of what the BLM should consider in an Environmental Assessment they intend to conduct on the impacts of a proposed “predator derby” on the BLM lands surrounding the Salmon, Idaho area during the weekend of January 2-4, 2015. 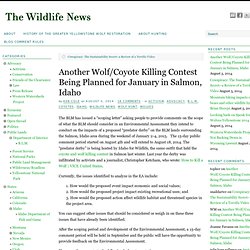 The 15-day public comment period started on August 4th and will extend to August 18, 2014.