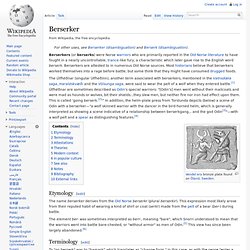 Berserkers are attested to in numerous Old Norse sources. Most historians believe that berserkers worked themselves into a rage before battle, but some think that they might have consumed drugged foods. The Úlfhéðnar (singular Úlfheðinn), another term associated with berserkers, mentioned in the Vatnsdœla saga, Haraldskvæði and the Völsunga saga, were said to wear the pelt of a wolf when they entered battle.[1] Úlfhéðnar are sometimes described as Odin's special warriors: "[Odin’s] men went without their mailcoats and were mad as hounds or wolves, bit their shields...they slew men, but neither fire nor iron had effect upon them. Etymology[edit] The name berserker derives from the Old Norse berserkr (plural berserkir). 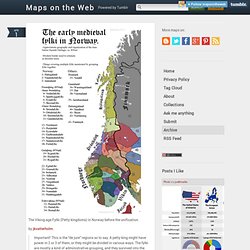 This is the “de jure” regions so to say. A petty king might have power in 2 or 3 of them, or they might be divided in various ways. Norse Mythology. The Norse Mythology Blog. Gods and Goddesses on the Edge: Myth and Liminality. Norse Magic. Norse Mythology. “Frigga Spinning the Clouds” by John Charles Dollman (1909) Frigg (pronounced “FRIG;” Old Norse Frigg, “Beloved”[1]), sometimes Anglicized as “Frigga,” is the highest-ranking of the Aesir goddesses. 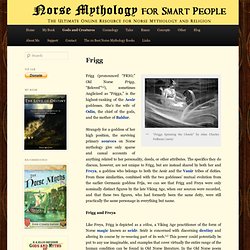 She’s the wife of Odin, the chief of the gods, and the mother of Baldur. Strangely for a goddess of her high position, the surviving primary sources on Norse mythology give only sparse and casual accounts of anything related to her personality, deeds, or other attributes. The specifics they do discuss, however, are not unique to Frigg, but are instead shared by both her and Freya, a goddess who belongs to both the Aesir and the Vanir tribes of deities. Frigg and Freya Like Freya, Frigg is depicted as a völva, a Viking Age practitioner of the form of Norse magic known as seidr. In the Viking Age, the völva was an itinerant seeress and sorceress who traveled from town to town performing commissioned acts of seidr in exchange for lodging, food, and often other forms of compensation as well. 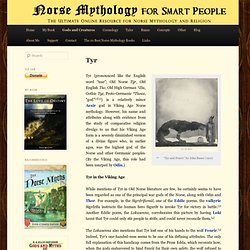 However, his name and attributes along with evidence from the study of comparative religion divulge to us that his Viking Age form is a severely diminished version of a divine figure who, in earlier ages, was the highest god of the Norse and other Germanic peoples. (By the Viking Age, this role had been usurped by Odin.) Norse Mythology. Loki (pronounced “LOAK-ee;” Old Norse Loki, whose meaning/etymology is unknown[1]) is the wily trickster god of Norse mythology. 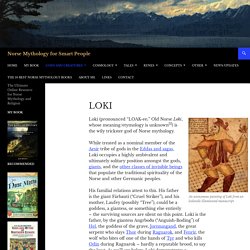 While treated as a nominal member of the Aesir tribe of gods in the Eddas and sagas, Loki occupies a highly ambivalent and ultimately solitary position amongst the gods, giants, and the other classes of invisible beings that populate the traditional spirituality of the Norse and other Germanic peoples. His familial relations attest to this. His father is the giant Fárbauti (“Cruel Striker”), and his mother, Laufey (possibly “Tree”), could be a goddess, a giantess, or something else entirely – the surviving sources are silent on this point. The Norse Gods.

The Norse Gods are the mythological characters that, as far as we know, came from the Northern Germanic tribes of the 9th century AD. These stories were passed down in the form of poetry until the 11th – 18th centuries when the Eddas and other medieval texts were written. Norse Mythology. The “Venus of Willendorf” (c. 23,000 BCE, found in modern-day Austria) Nerthus (Proto-Germanic *Nerþus) is a pre-Christian goddess venerated by some of the continental Germanic tribes described by the Roman historian Tacitus in his Germania (authored about 100 CE). 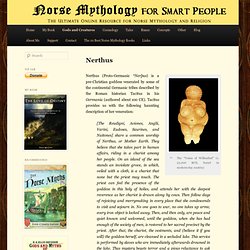 Tacitus provides us with the following haunting description of her veneration: Norse Mythology. “Njord’s Desire of the Sea” by W.G. 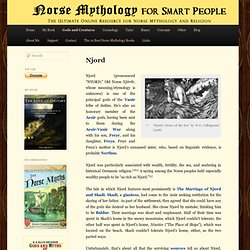 Collingwood (1908) Njord (pronounced “NYORD;” Old Norse Njörðr, whose meaning/etymology is unknown) is one of the principal gods of the Vanir tribe of deities. He’s also an honorary member of the Aesir gods, having been sent to them during the Aesir-Vanir War along with his son, Freyr, and his daughter, Freya. Freyr and Freya’s mother is Njord’s unnamed sister, who, based on linguistic evidence, is probably Nerthus. Njord was particularly associated with wealth, fertility, the sea, and seafaring in historical Germanic religion.[1][2] A saying among the Norse peoples held especially wealthy people to be “as rich as Njord.”[3] 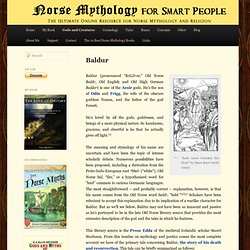 Norse Mythology. Odin (pronounced “OH-din”; Old Norse Óðinn, Old English and Old Saxon Woden, Old High German Wuotan, Wotan, or Wodan, Proto-Germanic *Woðanaz, “Master of Ecstasy”) is one of the most complex and enigmatic characters in Norse mythology, and perhaps in all of world literature. 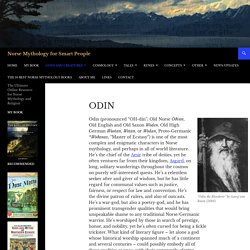 He’s the chief of the Aesir tribe of deities, yet he often ventures far from their kingdom, Asgard, on long, solitary wanderings throughout the cosmos on purely self-interested quests. He’s a relentless seeker after and giver of wisdom, but he has little regard for communal values such as justice, fairness, or respect for law and convention. He’s the divine patron of rulers, and also of outcasts. He’s a war-god, but also a poetry-god, and he has prominent transgender qualities that would bring unspeakable shame to any traditional Norse/Germanic warrior. He’s worshiped by those in search of prestige, honor, and nobility, yet he’s often cursed for being a fickle trickster. 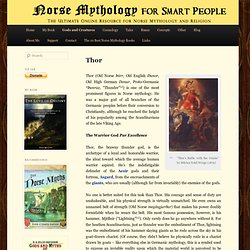 Norse Mythology. Freya (Old Norse Freyja, “Lady”) is one of the preeminent goddesses in Norse mythology. She’s a member of the Vanir tribe of deities, but became an honorary member of the Aesir gods after the Aesir-Vanir War. Her father is Njord. Her mother is unknown, but could be Nerthus. Freyr is her brother. Her husband, named Odr in late Old Norse literature, is certainly none other than Odin, and, accordingly, Freya is ultimately identical with Odin’s wife Frigg (see below for a discussion of this).

Norse Mythology. “Freyr” by Johannes Gehrts (1901) Freyr (pronounced “FREY-ur;” Old Norse Freyr, “Lord”) is a god who belongs to the Vanir tribe of deities. He’s also an honorary member of the other tribe of Norse gods, the Aesir, having arrived in their fortress, Asgard, as a hostage at the closing of the Aesir-Vanir War. Freyr was one of the most widely and passionately venerated divinities amongst the heathen Norse and other Germanic peoples. One Old Norse poem calls him “the foremost of the gods” and “hated by none.”[1] The reasons for this aren’t hard to understand; their well-being and prosperity depended on his benevolence, which particularly manifested itself in sexual and ecological fertility, bountiful harvests, wealth, and peace.

His role in providing health and abundance was often symbolized by his fylgja, the boar Gullinborsti (“Golden-Bristled”),[2] and by his enormous, erect phallus.[3] Norse Mythology. The Aesir Gods and Goddesses. Norse Mythology. “Heimdall on the Rainbow Bridge” by Emil Doepler (1905) Heimdall (pronounced “HAME-doll;” Old Norse Heimdallr, whose meaning/etymology is unknown[1]) is one of the Aesir gods and the ever-vigilant guardian of the gods’ stronghold, Asgard.

His dwelling is called Himinbjörg (“Sky Cliffs,” connoting a high place ideal for a fortress), which sits at the top of Bifrost, the rainbow bridge that leads to Asgard. He requires less sleep than a bird. His eyesight is so keen that he can see for hundreds of miles by day or by night, and his hearing is so acute that he can hear grass growing on the ground and wool growing on sheep.[2] Here he watches and listens, holding at the ready the horn Gjallarhorn (“Resounding Horn”), which he sounds when intruders are approaching. Norse Mythology. Giants. “The Nøkk Screams” by Theodor Kittelsen (c. 1900) The giants of the pre-Christian mythology and religion of the Norse and other Germanic peoples are a tribe of spiritual beings whose power equals that of the two tribes of gods, the Aesir and the Vanir. Their character, however, is very different from that of the gods – and, in fact, the giants and the gods correspond to opposing, but intertwined, cosmological principles.

The Devourers “Giants” is a misleading Anglicization of the name of these beings. In modern English, of course, a “giant” is first and foremost something of enormous size. Speakers of Old Norse called them jötnar (singular jötunn, pronounced roughly “YO-tun”) or þursar (singular þurs, pronounced “THURS” like the first element in “Thursday” but with a soft “s” at the end). How, then, did these “devourers” come to be called “giants?” Utangard Spirits. The Vanir Gods and Goddesses. Valhalla. Gods of Asgard. Dimension of Origin: Unrevealed, possibly AsgardHabitat: TemperateGravity: Earth-likeAtmosphere: Earth-likePopulation: 500-800 (estimated)Other Associated Dimensions: The Asgardian dimension is a cosmology of inter-connected worlds of which inhabit the other known races of the Asgardian gods.

Norse mythology. An undead völva, a Scandinavian seeress, tells the spear-wielding god Odin of what has been and what will be in Odin and the Völva by Lorenz Frølich (1895) Norse Mythology.