Tursaansydän. Variations of the tursaansydän symbol The tursaansydän was believed to bring good luck and protect from curses, and was used as a decorative motif on wooden furniture and buildings in Finland. 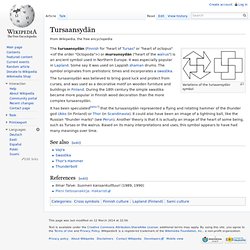 During the 18th century the simple swastika became more popular in Finnish wood decoration than the more complex tursaansydän. It has been speculated[who?] That the tursaansydän represented a flying and rotating hammer of the thunder god Ukko (in Finland) or Thor (in Scandinavia). It could also have been an image of a lightning ball, like the Russian "thunder marks" (see Perun). Asgard. In Norse religion, Asgard (Old Norse: ''Ásgarðr''; "Enclosure of the Æsir"[1]) is one of the Nine Worlds and home to the Æsir tribe of gods. 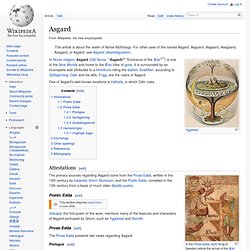 It is surrounded by an incomplete wall attributed to a Hrimthurs riding the stallion Svaðilfari, according to Gylfaginning. Odin and his wife, Frigg, are the rulers of Asgard. One of Asgard's well known locations is Valhalla, in which Odin rules. Iku-Turso. Description[edit] His appearance remains unclear, but he is described with several epithets: partalainen (the one who lives on the brink, or alternatively, the bearded one), Tuonen härkä (the ox of Tuoni, Death), tuhatpää (thousand-headed), tuhatsarvi (thousand-horned). 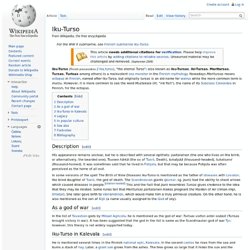 It was sometimes said that he lived in Pohjola, but that may be because Pohjola was often perceived as the home of all evil. As a god of war[edit] Iku-Turso in Kalevala[edit] He is mentioned several times in the Finnish national epic, Kalevala. Later, Iku-Turso is summoned by Louhi, the Lady of the North, to stop the theft of the magical artefact Sampo.

Two variants of tursaansydän (heart of Tursas), also known as mursunsydän (heart of walrus), an ancient Scandinavian symbol believed to bring good luck and protect from curses. Valkyrie. In Norse mythology, a valkyrie (from Old Norse valkyrja "chooser of the slain") is one of a host of female figures who decide which soldiers die in battle and which live. 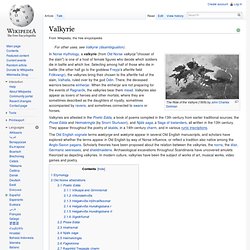 Selecting among half of those who die in battle (the other half go to the goddess Freyja's afterlife field Fólkvangr), the valkyries bring their chosen to the afterlife hall of the slain, Valhalla, ruled over by the god Odin. There, the deceased warriors become einherjar. When the einherjar are not preparing for the events of Ragnarök, the valkyries bear them mead. Valkyries also appear as lovers of heroes and other mortals, where they are sometimes described as the daughters of royalty, sometimes accompanied by ravens, and sometimes connected to swans or horses. Thor. In Norse mythology, Thor (/θɔr/; from Old Norse Þórr) is a hammer-wielding god associated with thunder, lightning, storms, oak trees, strength, the protection of mankind, and also hallowing, healing and fertility. 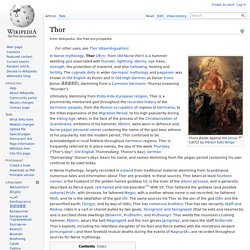 The cognate deity in wider Germanic mythology and paganism was known in Old English as Þunor and in Old High German as Donar (runic þonar ᚦᛟᚾᚨᚱ), stemming from a Common Germanic *Þunraz (meaning "thunder"). Týr. Týr (/ˈtɪər/;[1] Old Norse: Týr [tyːr]) is a god associated with law and heroic glory in Norse mythology, portrayed as one-handed. 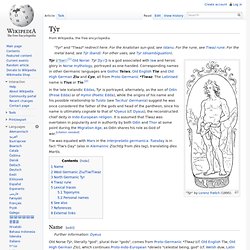 Corresponding names in other Germanic languages are Gothic Teiws, Old English Tīw and Old High German Ziu and Cyo, all from Proto-Germanic *Tīwaz. The Latinised name is Tius or Tio.[2] Name[edit] The earliest attestation for Týr's continental counterpart occurs in Gothic tyz "the t-rune" (𐍄) in the 9th-century Codex Vindobonensis 795.[4] The name is later attested in Old High German as Cyo in the A Wessobrunn prayer ms. of 814. The Negau helmet inscription (2nd century b.c.) may actually record the earliest form, teiva, but this interpretation is tentative. Týr in origin was a generic noun meaning "god", e.g. West Germanic Ziu/Tiw/Tiwaz[edit] A gloss to the Wessobrunn prayer names the Alamanni Cyowari (worshipers of Cyo) and their capital Augsburg Ciesburc.[5] North Germanic Tyr[edit] Tyr appears in the Eddic Poem Hymiskviða. Tiwaz rune[edit] Lexical traces[edit]