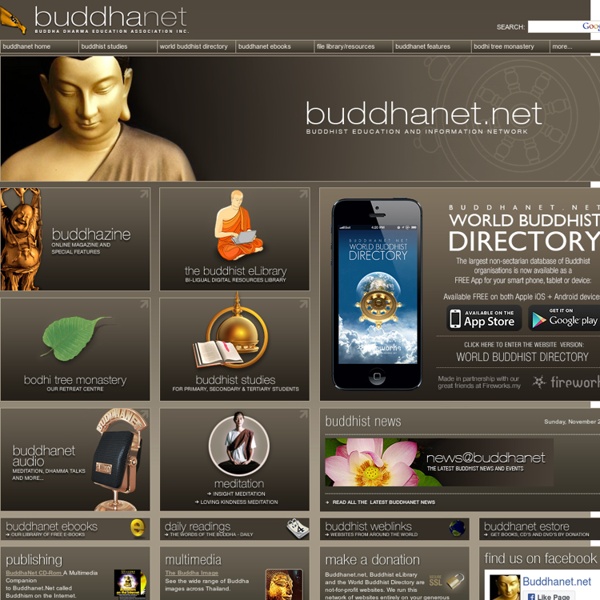 Meaning of the Medicine Buddha Mantra 1. OM: we begin with Om, the under-current tone of the universe 2. NAMO: means yielding or full of trust; can also mean to bend or bow, and might mean to melt into 3. Bhagawate: means in intimate relation to the Divine and often means the entire cosmos Dharma The Cat Cartoons “Dharma The Cat – Philosophy With Fur” Features clever, thought-provoking cartoonsthat appeal to all ages, blendingphilosophy and spirituality with humor. DHARMA THE CAT SAYS: "Sometimes when you thinkyou're teaching others, they're teaching you!" “It's havoc, farce and mayhem on the rocky path to nirvana,with a Buddhist cat, a novice monk and a mouse hell-bent on cheese!” DHARMA THE CAT SAYS: "Comparisons are odious!"

Secular Buddhism Secular Buddhism—sometimes also referred to as agnostic Buddhism, Buddhist agnosticism, ignostic Buddhism, atheistic Buddhism, Buddhist atheism, or Buddhist secularism—is a broad term for an emerging form of Buddhism and secular spirituality that is based on humanist, skeptical, and/or agnostic values, as well as pragmatism and (often) naturalism, rather than religious (or more specifically supernatural or paranormal) beliefs. Secular Buddhists interpret the teachings of the Buddha and the Buddhist texts in a rationalist and often evidentialist manner, considering the historical and cultural contexts of the times in which the Buddha lived and the various suttas, sutras and tantras were written. Traditional Buddhist ethics, such as conservative views regarding abortion, homosexuality and human sexuality, may or may not be called into question as well.

Web Design Ledger 599 shares 8 Must Have Free Fonts for your Designs Need some fresh fonts for your new projects? Clinical Fact Sheets: Talking to Patients About Sexuality and Sexual Health (Updated April 2008) Patients may have difficulty talking to health care providers about sexuality and sexual health for many reasons, even when they clearly are sexually active. Most people are not raised to discuss sexual matters openly, and when sexuality is taught, it is often done in negative terms. As patients move through the stages of life, the dialogue with providers on this topic will evolve; a conversation with a sexually active adolescent should differ significantly from a discussion with a married perimenopausal woman. Research suggests that communication between health care providers and patients can improve sexual health.

Can we change the future? A scientific view... I was reading this article from 1998 about quantum theory – I know it’s pretty old…, but there was something about it that struck me! It’s maybe also because I’m reading this book that contains a lot of prescience characteristics or just my open mind. So, I decided to put together all this scientific evidence with one scope – Can we change the future? Do we have an influence on our future? An extract from the article on ScienceDaily (Feb. 27, 1998)

Can Children Know, At Age 2, They Were Born The 'Wrong Sex'? : 13.7: Cosmos And Culture iStockphoto Kathryn's Dad thought she was going through a tomboy phase. Kathryn's Mom suspected it might be something more. Shambhala SunSpace Read the intro from the new Shambhala Sun book, Buddha’s Daughters: Teachings from Women Who Are Shaping Buddhism in the West In addition to A Beginner’s Guide to Meditation, this Spring marks the release of another Shambhala Sun book, Buddha’s Daughters, edited by Shambhala Sun Deputy Editor Andrea Miller. The book is available now — click here to order or for more information. Below, you can read Andrea’s introduction to the book (as well as browse its chock-full Table of Contents). Buddha’s Daughters: Introduction

Om Mani Padme Hum: The Meaning of the Mantra in Tibetan Buddhism Glimpsing a Few More Facets of the Mantra There are many ways to understand the meaning of the mantra. Here are a few of them: The Transformation of Speech [An excerpt from The Dharma, by Kalu Rinpoche, from a chapter on The Four Dharmas of Gampopa. ] "The second aspect of transformation [of confusion into wisdom] concerns our speech. Thai Forest Tradition The Thai Forest Tradition is a tradition of Buddhist monasticism within Thai Theravada Buddhism. Practitioners inhabit remote wilderness and forest dwellings as spiritual practice training grounds. Maha Nikaya and Dhammayuttika Nikaya are the two major monastic orders in Thailand that have forest traditions. The Thai Forest Tradition originated in Thailand, primarily among the Lao-speaking community in Isan. The Thai Forest Tradition emphasizes direct experience through meditation practice and strict adherence to monastic rules (vinaya) over scholastic Pali Tipitaka study. Forest monks are considered to be meditation specialists.

MOOC pedagogy: the challenges of developing for Coursera In the summer of 2012 the team of teachers and researchers associated with the MSc in E-learning programme at the University of Edinburgh began developing a Massive Open Online Course (MOOC) for the Coursera platform. Launched only a year earlier, this for-profit company founded by Stanford professors Andrew Ng and Daphne Koller has focussed primarily on hosting computer science related courses from big name US institutions. The recently announced partnership with the University of Edinburgh presented the team with an opportunity to engage and experiment with the much-publicised MOOC format, and foreground issues related to the theory and practice of online education itself. Designing for MOOCs